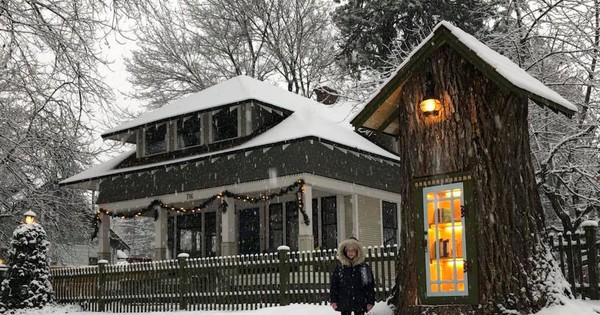 When her favorite cottonwood had to go, Sharalee Armitage Howard turned its stump into the best Little Free Library yet.

To many a tree lover, perhaps the worst sound in the world is that of a chainsaw buzzing through wood. But sometimes trees have to go, as was the case with the 110-year-old cottonwood that lived in front of Sharalee Armitage Howard’s Idaho home. The family had dispiritedly watched the grand tree’s slow demise for a decade; the decision was made to remove it after a large branch crashed into her son’s car and the tree had become too much of a risk.

But rather than let the cottonwood disappear into the sad, sad land of forgotten trees, Sharalee decided to honor its legacy in the most magical way: She turned its stately stump into a Little Free Library.

“I really hated to get rid of that tree – it had such curb appeal,” she told The Washington Post. “But the core had been rotting for years. When it came time to hollow out the stump for my library, all we had to do was reach in and pull out the soft insides.” Imagining its new life helped console her when they started dismantling the tree.

That Sharaless came up with this brilliant booklover’s shrine of a tree may not have come as much of a surprise to those who know her. The mom, homemaker, artist, and community advocate works at her local library in Coeur d’Alene, and has crafted some pretty remarkable objects out of old, unrepairable books … among other creative efforts.

She drew the plans for the Little Free LIbrary herself, and no details were left unattended to. Stone steps invite book lovers up to the glass French door; charming fixtures and hardware are all perfect. And the dental molding above the door is comprised of book titles like Call of the Wild, Grapes of Wrath, and naturally, The Hobbit. Here it is, “… minus some cleanup, vegetation, and trim work.”

And its charms have not been lost on neighbors … and well, basically the world. Not surprisingly, photos of the tree have gone viral.

“I’m shocked at how many people I’ve heard from these past several months,” said Howard. “It’s really caught on, maybe because it crosses over into a lot of different passions: nature, books, libraries and people who just appreciate community projects.”

Tiny libraries operate on a simple sharing-economy principle: “Take a book, return a book.” And to that end, Sharalee says that the tree has attracted hundreds of regular lenders and lendees, with a consistent turnover of titles. She and her family started the stacks with just a few dozen books in December, and have not needed to restock the shelves once, despite the tree’s popularity.

“It’s interesting to see what kind of books people add to the shelves,” she said. “I love that even the most obscure titles end up in somebody’s hands.”

Started in 2009, the Little Free Library movement has been a remarkable success, a network of which now includes more than 80,000 locations across the United States and 91 other countries. And while there has been no shortage of creative shapes and forms – lots of cute little houses and other wee architectural wonders – Sharalee’s really stands out.

By serving double duty as book lover’s resource and as a monument to a beloved tree, this special creation makes sure that the tree’s life wasn’t lived in vain. The cottonwood’s towering limbs may be gone, but its memory lives on, one borrowed book at a time.

When her favorite cottonwood had to go, Sharalee Armitage Howard turned its stump into the best Little Free Library yet.