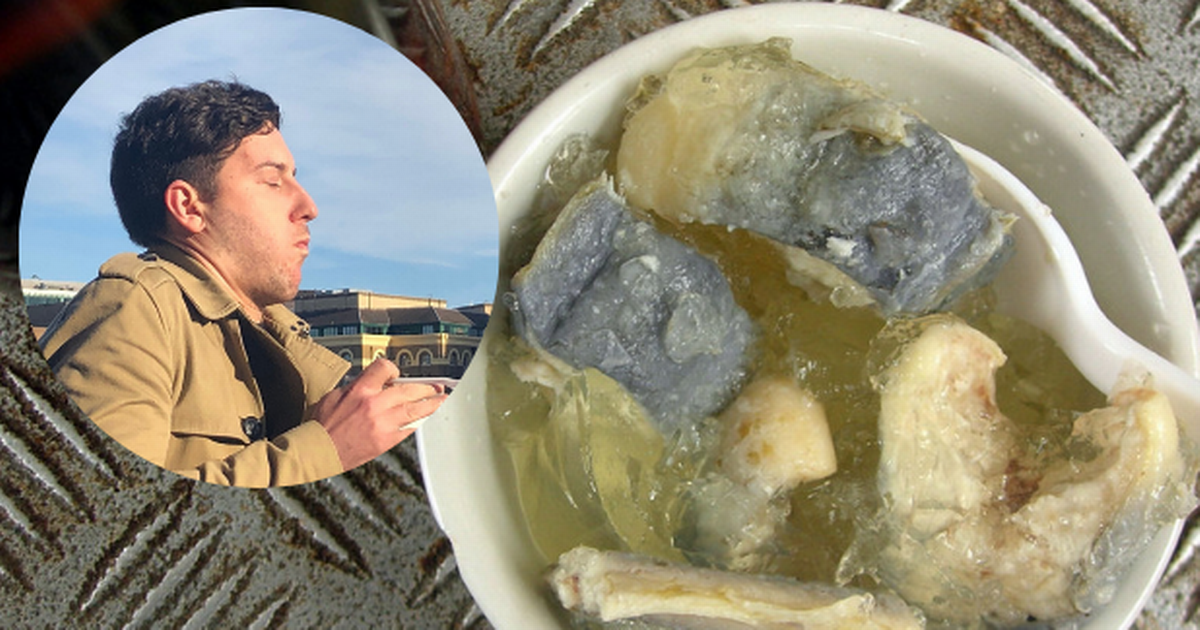 A jellied eel. To some that conjures up images of an old London, with cobbled streets and jobs on the docks.

To others it sounds like the worst thing imaginable.

But jellied eels were London’s own fast food. And while New York’s got its pizzas and Berlin has its sausages, London has become a food sponge.

Why haven’t our fast food traditions persisted? MyLondon set out to find out and I was selected to investigate. Gulp.

The first thing Robert Kelly, a veteran of the eel trade who’s family have been selling eels for more than a century, told me as I stepped into his cafe was “they’re an acquired taste”, a phrase he then repeated no less than six times over the next hour or so.

Let’s talk about that for a second. Jellied eels.

Eels are disgusting in a way very few fish are. They are the snakes of the sea and jellying them, or indeed jellying any food is, in my opinion, one of the worst ways you can eat it.  They are usually served with pie, mash and liquor, but were also snacks and good sources of cheap protein.

The first thing most people think when they are confronted with the fact that there is such a thing as jellied eels is “why”?

That’s what I asked Mr Kelly, who told me eels are in fact great fish, but I could tell he was sympathetic to my baseline disgust during my entire time working on this story.

His ‘Nana’ started the family business in eels,  when her husband was injured “working on the trams”, Mr Kelly tells me, as he beams over a family tree on the wall of his Bethal Green Road restaurant, S.R. Kelly and Sons.

He is in his 70s but still works at the shop with his wife. There were no customers in when I arrived at around 2pm, which did not seem like a surprise to either of us.

Mr Kelly is a fascinating and friendly man, who seems to have accepted that eels will die out soon.

“Are stewed eels any more popular?” I ask, hoping for his sake they were, but they aren’t he said. His pies and mash did look and smell incredible though.

“With the amount of different food outlets now, I mean the youngsters are in McDonald’s aren’t they?,” he quizzed me. Guilty, though I much prefer one of those Turkish Kebab shops he’s surrounded by than tucking into jellied eels.

He said: “Then you have the rest of them the variety of food that’s sold these days. [Eels] were the fast food of my father and my nan.

“If you look back, it was fish & chip shops, pie and mash shops and cafs.”

A time when they were a popular snack

I am sympathetic but it seems nobody wants Mr Kelly’s eels anymore. He told me of a time in the not too distant past that he had his own eel trading company.

Decades later, he’s even stopped making his own jellied eels, a process of basically just boiling them, adding gelatine and cooling. He even used to buy the eels fresh and kill and chop them himself.

There really is no need when he tells me they now sometimes shift just a dozen or so portions of eels a week, at £3.20 each.

Mr. Kelly now gets his eels pre-jellied from Mick’s Eels in Billingsgate, who he says is the absolute best.

He tilts the yellowish clear jelly with floating chunks of eels suspended in them towards me and says “Eels come graded. These are the best sized eels that you can buy.

“You pay more for them but they are the best, and you have to pay for the best unfortunately these days,” he added.

That was little reassurance although I appreciated his salesmanship.

The jelly is then broken back down to something more “edible” and I am sent off to MyLondon headquarters on the Northbank of the Thames near Tower Bridge.

I’ve been told to get people to eat some of my eels and tell us on camera what they thought. I guess we were hoping the disgusting name was a barrier to something brilliant.

Well just like the number of eels in the Thames has collapsed, so did everyone’s enthusiasm when I approached them with my jellied sea snakes and a camera.

Richard takes on the jellied eels

I return to the office, place the eels in the fridge (they are apparently best served chilled), and there is an awkward acknowledgement that we will have to literally take one for the team and try it.

On a sunny evening, by the Thames, content editor Richard Duggan, a self-confessed “lover of sea food”, stepped up to the plate, which in this case is a cold styrofoam cup filled with jellied eels.

Richard anticipated he would taste sea water, but immediately retched when the eel hit his toungue. His body convulsed towards the railing overlooking the Thames but he managed to keep the eel in.

Just as he recovers though, his arms go to jelly (sorry) and he drops the cup.

It’s a moment of pure joy for all of us.

Jellied eels are disgusting, it was settled, and we could all go home.

Whether it’s old schools, sorely missed shops or nightclubs you wish you could have one last drink in, you can post your nostalgic pictures in this group to see who else can remember.

You can also share your anecdotes from north, south, east, west and central London and connect with other people.