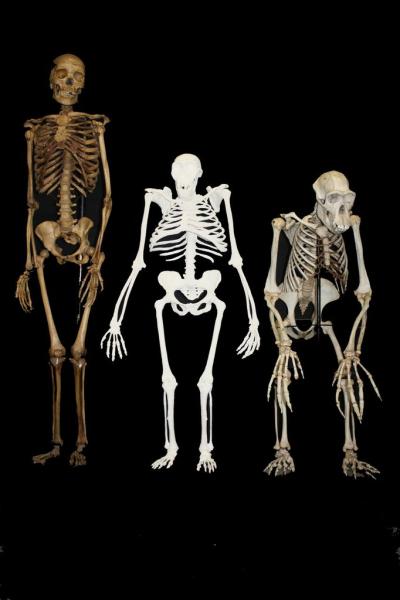 Australopithecus sediba (center) has a unique mix of anatomical traits that has led to debate over its proper place in the hominin family tree. For comparison: a small-bodied female modern human (left), and a male chimp (right). (Credit: Lee R. Berger/University of the Witwatersrand)

Remember Australopithecus sediba? The convention-challenging South African hominin, announced with much fanfare in 2010, has gotten lost in a torrent of other recent fossil finds from our family tree. A new study adds insult to injury, stacking the odds against A. sediba‘s place in our distant evolutionary past.

The last decade or so has been a wild ride for researchers trying to figure out the story of human evolution. The family tree of hominins — humans and species more closely related to us than to other apes — expanded considerably.

Paleoanthropologists found entirely new species, such as the Denisovans, Homo naledi and Homo luzonensis, plus more examples of Homo floresiensis and a host of fragmentary fossils, stretching from Ethiopia to China, not yet assigned to a particular branch.

At the start of this flurry of finds, back in 2008, paleoanthropologist Lee Berger’s young son famously noticed some bones at the South African site of Malapa. That chance observation led to the discovery of multiple specimens of a hominin Berger christened Australopithecus sediba, which lived nearly 2 million years ago.

Berger and colleagues suggested that A. sediba‘s unique blend of primitive and more highly evolved traits made it a likely direct ancestor of the genus Homo (including us). This bold claim helped reinvigorate an old idea that the roots of human evolution were in South Africa. Predictably, the idea did not sit well with a lot of other researchers, particularly the formidable camp that firmly believes humans evolved in East Africa.

In 2013, half a dozen papers published together in Science provided detailed analysis of A. sediba, coming to no firm conclusions but leaving the door open on its potential as our distant ancestor.

The back and forth between pro- and anti-Grandma Sediba camps, which has continued, has been largely overshadowed by subsequent unrelated hominin discoveries, including Berger’s team turning up H. naledi finds in unprecedented numbers.

Perhaps the biggest obstacle toward placing A. sediba as a direct ancestor of our lineage is its age. At just shy of 2 million years, the australopith is considerably younger than the earliest known members of the genus Homo.

A 2.8-million-year-old scrap of jaw bone from Ledi-Geraru, Ethiopia, has been held up as the oldest Homo fossil, though it has not yet been assigned to a particular species. (And, it’s worth nothing, not everyone agrees the Ethiopian fossil should be classified as Homo. Critics of the claim include, perhaps not surprisingly, Berger and some of his associates.)

By 2.4 million years ago, Homo habilis, the earliest defined member of our genus, was running around East Africa. The mysterious hominins of Dmanisi — described, with some controversy, as a subspecies of Homo erectus — were living well outside Africa, in the Caucasus region of southwest Asia, by about 1.87 million years ago.

So it’s clear that the Homo lineage had evolved hundreds of thousands of years before the australopiths of Malapa were alive. However, some researchers have continued to argue that it’s possible A. sediba was a direct ancestor of Homo.

In 2018, for example, a team noted that A. sediba is known from just one site so far, making it impossible to determine the species’ range, either geographically or temporally. Other mammal lineages better known from the fossil record suggest that species stick around 800,000-6.3 million years, though hominin species, at least as currently delineated, appear to have durations of just under a million years.

That means, contend the authors of the 2018 study, that it’s possible A. sediba was around early enough for one population to branch off into Homo and another to hang out at Malapa, stuck in a rut, evolutionarily speaking.

Nope, say the researchers behind a new study in Science Advances. Essentially a pointed response to the 2018 paper, the team used probability models to determine that there is a mere 0.09 percent chance that A. sediba is a direct ancestor. Instead, say the authors, the most likely direct ancestor of the Homo lineage remains East Africa’s Australopithecus afarensis.

Of course, the new research is not the nail in the coffin of the debate. It’s more the latest salvo in a long-running disagreement over the roots of our family tree. Stay tuned. There will be more.