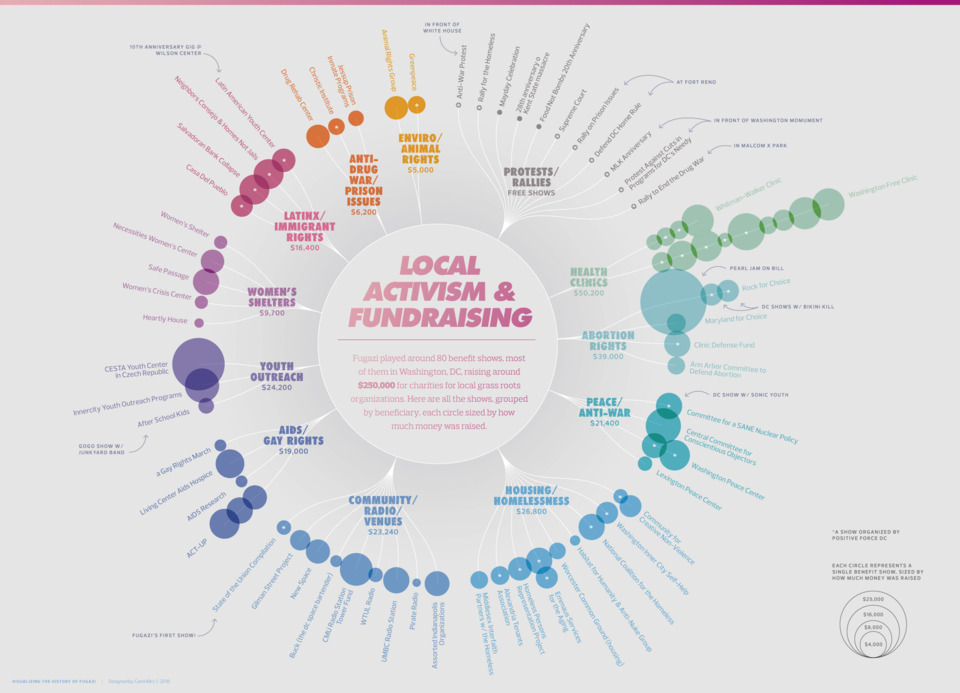 In the 16 years since Fugazi last performed live, the band has been cloaked in an air of mystique. Fans who never saw the beloved act live are quickly outnumbering those who did. Ian MacKaye, Guy Picciotto, Joe Lally, and Brendan Canty were Fugazi, whose tenure began in 1987 and lasted until 2003. Outside of the band, each musician had (and continue to have) other projects. But, nothing compares to the impact the four of them created together.

To Carni Klirs, Fugazi is not just a band, but a model for the D.C. punk scene at large, something highlighted in Action. Reaction. Action: Visualizing Fugazi. The local graphic designer explains that his collection of data visualization graphics is, in some ways, simply an homage to the lasting influence of a prolific punk band. But it also provides a way of looking at just what a community shaped by music can accomplish.

“The exhibit is about the impact the band had,” Klirs explains, “but it is [also] a story that could be told about any of the Positive Force shows in D.C. or any of the benefit shows bands were doing at that time.”

Klirs is no stranger to the city’s punk scene. He has been going to shows since the early 2000s, has performed in various bands, and operates a recording studio. When it came time to craft an immersive thesis project for his masters program in Information and Data Visualization at the Maryland Institute College of Art last fall, it did not take long for him to come up with an area of focus.

Klirs says he was originally interested in a project that looked “at how much money was raised by benefit shows” in the city. But he immediately ran into some road blocks: Records of such events are scarce and disorganized (if they exist at all). He then remembered the Fugazi Live Series: an extensive, detailed archive of the band’s performance history, created by Dischord Records and made available to the public. Klirs pulled the data from the extensive archive and began creating what would eventually become Visualizing Fugazi.

Roughly 200 hours of work went into creating the Visualizing Fugazi project, of which there are five distinct parts. There is a map of Washington, D.C. annotated with the places where Fugazi played. It takes an interesting turn when you see the unconventional venues—the Supreme Court and the National Mall stand out. A world map shows every country Fugazi visited. Klirs says it was while researching for this part he was made aware of how the band’s “egalitarian approach to music” influenced their tour schedule.

“They made a point to go places they [hadn’t] toured previously, and hit up smaller towns,” he says.

The graphic detailing Fugazi’s local activism and fundraising accomplishments is closest to what Klirs originally intended for the project. During the band’s tenure, they played around 80 benefit shows, raising roughly $250,000. The colorful web expands on the areas of interest for which each of these shows raised money. Fugazi rarely played alone, and paid special attention to the other acts they shared a bill with (all 1,000 of them!). The fourth item in Visualizing Fugazi examines the bands who most often accompanied Fugazi on tour.

The last entry in Visualizing Fugazi is one that had the most people buzzing at the opening reception on a recent Saturday evening: the band family tree. This is the only part of Klirs’ project that was altered for its display in the exhibition. In the original graphic, four degrees of separation are depicted. Klirs expanded the musical degrees of separation for the exhibition, with the hope that visitors could pick out their friends’ bands and see how everyone is connected.

Lost Origins Gallery is a natural fit for Visualizing Fugazi to reach its final form. The Mount Pleasant neighborhood in Northwest D.C. is a vital detail in the band’s story and Jason Hamacher, the gallery’s owner, was in a number of the bands featured in the Fugazi family tree—including Battery, Decahedron, and Frodus.

For this exhibit, the gallery is split into two sections. When visitors walk in they are greeted with an array of memorabilia—some of the ephemera was retrieved by John Davis, an archivist at the University of Maryland, and some are on loan from Dischord Records. You can read interviews with the band in zines, look at rarely seen photos, or reflect on an entire wall filled with thank you notes from organizations to which the band donated.

Given the subject matter, the exhibition would feel incomplete without some sort of sonic component. Rather than simply playing “Repeater” over the speakers, John Scharbach, co-director of Shining Life Press, “create[d] a sound collage of unreleased songs, improvised instrumentals, spontaneous jams, [and] interesting banter that the band had performed live.”

Visualizing Fugazi effortlessly condenses an band’s career and lasting impact into one room. But it does so in a way that does not feel overstuffed. Combined with personal touches directly supplied by the band’s members, the meticulously crafted data visualizations provide insight into some of the nitty gritty details of Fugazi’s tenure without coming off as intimidating.

For a band whose devotion to inclusivity was central to their being, approaching this project with any sort of pretension would have undermined its message; something Klirs grasps.