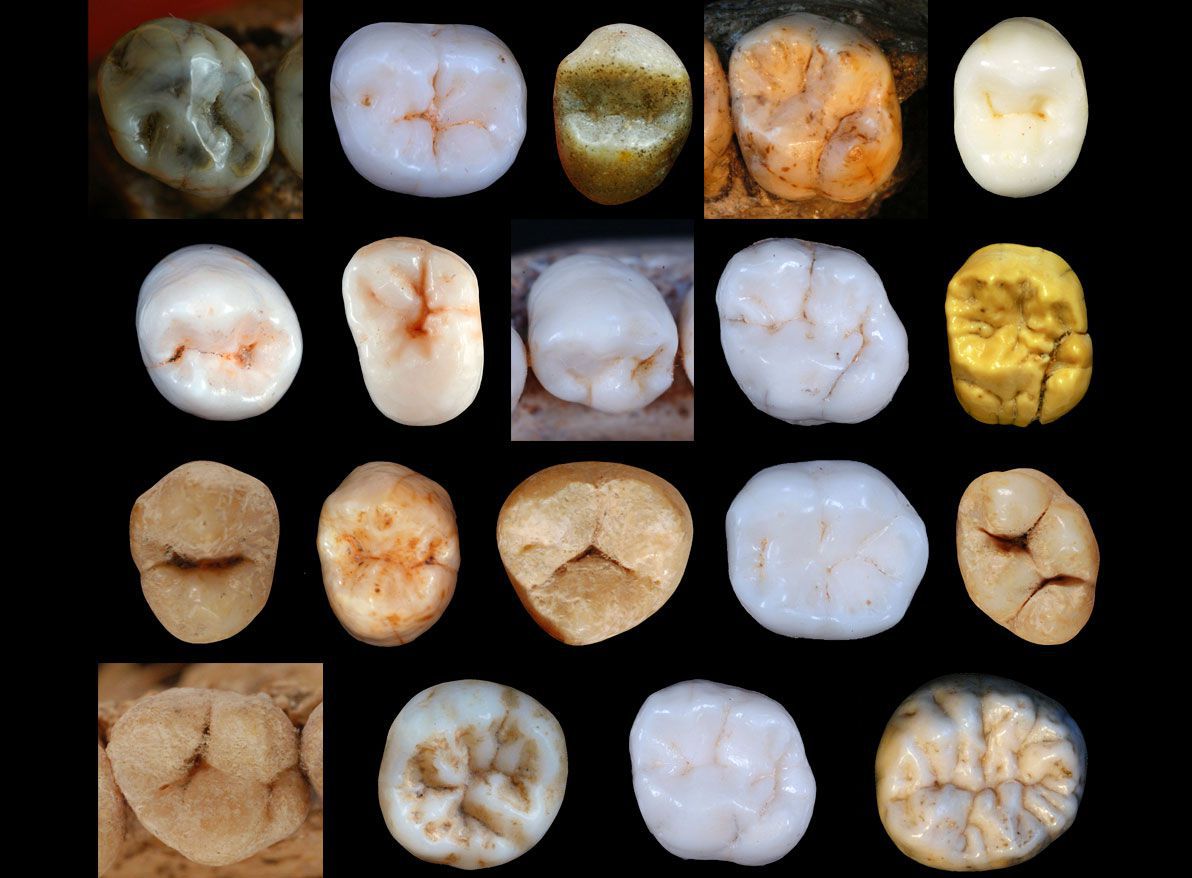 In a cave called the ‘pit of bones,’ up in the Atapuerca Mountains of Spain, a collection of 430,000-year-old teeth are curiously smaller than might be expected for the skulls they were found with. The anomaly has one scientist suggesting that the lineages of modern humans and Neanderthals split some 800,000 years ago, tens of thousands of years earlier than genetic studies have estimated.

Aida Gómez-Robles, an anthropologist at University College London, studies how ancient hominin species’ teeth evolved over the ages. She believes that because the ancient teeth look too modern for their era, they must have evolved unusually quickly or, as she finds more likely, had more time to evolve than has been generally believed. The new research was published today in Science Advances.

As various hominin species evolved, their teeth changed in notable ways, generally becoming smaller over time. Studying the teeth of various early human ancestors is one of the most common ways of differentiating between species and even identifying new ones. Gómez-Robles’ previous research suggests that teeth tend to evolve at a relatively standard rate across hominin history. If that’s true, the molars and premolars unearthed from the Spanish cave are smaller than would be expected given their age.

“When we look at these teeth, they are very similar to the teeth of later Neanderthals, even though they are much older,” Gómez-Robles says. “In this study we’ve tried to examine the amount of time that these early Neanderthals would have needed to evolve this dental shape, [which] is so much like the dental shape of Neanderthals that are much later.”

Neanderthals and Homo sapiens share a common ancestor, but exactly who that species was, and when the later lineages diverged from it, is a difficult mystery to untangle. But there are clues, and the new tooth study is far from the first evidence to emerge even from Sima de los Huesos, the fossil-rich cave site in Spain’s Atapuerca Mountains. The hominins who lived here, some 30 individuals who’ve been well-studied over the years, appear from their morphology and DNA to be early Neanderthals—in fact, the remains represent some of the oldest known Neanderthals. But how close were they really to the common ancestor of both that vanished species and our own?

Genetics has helped us peer into the past and sketch out the ancient branches of the hominin family tree. A 2016 study of 430-000-year-old Neanderthal remains from the Sima de los Huesos site estimates the time of the Neanderthal split from the Homo sapiens lineage at 550,000 to 765,000 years ago. Other genetic studies similarly suggest divergence times that are less than 800,000 years ago.

Paleoanthropologist Rick Potts, director of the Smithsonian’s Human Origins Program, says that while Gómez-Robles raises some plausible ideas, he’s far from convinced that rates of dental evolution are as standard or predictable as the paper suggests. “She’s bitten off an interesting topic here, but I just don’t see the argument that dental rates of evolution are absolutely known to the point where we can then say that for certain the Neanderthal-modern human divergence must have been earlier than 800,000 years ago,” Potts says. “A variety of molecular genetic studies suggest it’s more recent.”

It’s possible, Gómez-Robles says, that the teeth evolved at an unusually high rate due to strong selection for genetic changes. This accelerated change could have happened if the remote population lived in isolation from Europe’s other Neanderthals. But Gómez-Robles believes that the teeth simply evolved over a longer period of time, which according to her timeline of dental evolution rates would put the split between the Homo sapiens and the Neanderthal lineage at 800,000 years ago or older.

“Everything else, such as the face [and] the anatomy of these hominins, looks kind of intermediate,” Gómez-Robles says. “They look like what we’d expect for hominins of that age. But the teeth look very, very different. They look very Neanderthal, and the only thing that’s different is the teeth. … If there was selection we’d expect that to have an effect on something else, like the face, and not just the teeth.”

Potts also points out several possible causes of misinterpretation, including a variable called “generation time” that could greatly impact the timeline of dental evolution over many thousands of years. “If you have a quicker or a slower pace of development of the teeth, of growth, that would affect your estimation of rates of evolution,” he says.

Scientists do have evidence that the speed of tooth development changed over evolutionary time. Microscopic studies of tooth enamel layers allow researchers to calculate the days between a fossil hominin’s birth and the eruption of its first molar, showing that 1.5 million years ago, young Homo erectus got their first molar at around 4.5 years old. By about 200,000 years ago, Neanderthals got the same tooth by around age 6, as we humans still do today. “And we don’t know when, between 1.5 million years ago and 200,000 years ago, that rate changed to a much slower rate of development of the teeth,” Potts says. “So that’s a lot of wiggle room.”

Hybridization between different species, which appears to have been rampant during the era, is another possible complication. (Mating between the modern human and Neanderthal species occurred as recently as 50,000 years ago.) “There’s all hell breaking loose in interglacial Europe during this time period, where there are populations separating from one another for periods of time, probably undergoing fast evolution, coming back together thousands to tens of thousands of years later,” Potts says. “We don’t know what the effect of that evolutionary population’s history, dividing and coming back together over and over again during ice age and interglacial Europe, would have had on mechanisms of dental evolution.”

Given the difficulties of untangling different lines of ancient evidence, and the relatively small differences between genetic and tooth evolution estimates of the modern human-Neanderthal split, one might wonder why uncovering the true timeline is so important. But filling in such blanks is the only we can accurately chart the many evolutionary shoots and branches of our own family tree—and learn how we became who we are.

“Even when the difference is not huge,” Gómez-Robles says, “the implications of those differences can be quite important in terms of understanding the relationships between different species, and which ones are ancestral to one another.”