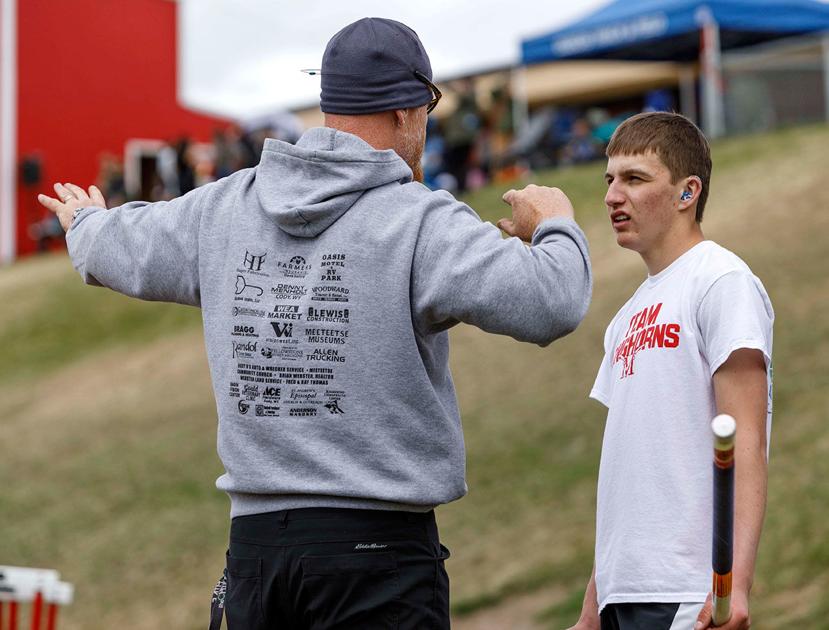 When Anthony Kluesner bounced hard on the pole vault mattress during regionals in Lander last year, a hearing aid popped out and vanished, setting off a scramble.

It was akin to a basketball player dropping a contact lens on the court, sending players to their knees doing the needle-in-the-haystack routine.

The hearing aid being a couple of inches long, it was easier to spot than a dot of a lens, and the crisis was quickly defused.

In his four years of Meeteetse High School sports, spread over 12 autumns, winters and springs, that was the only time, regardless of collisions, some with tacklers, some with floors, a hearing aid disappeared, if only briefly.

Sure, as Kluesner, whose high school sports career ends this weekend at 1A state track in Casper, competed in football, basketball and track, periodically had his essential tools for navigating the world separated from an ear. But they were quickly scooped up.

“They would fling out of my ears in football,” he said. “I’ve had it happen a time or two in basketball, diving for a loose ball.”

There was no going without. If Kluesner had tried to play sports without his hearing aids, he could not have heard his coaches’ instructions, official’s whistle or crowd applause, or communicated with teammates during play.

Except in small towns, and Meeteetse with its population of 327 qualifies, it is rare enough for high school athletes in this age of specialization to compete in a sport every school season and especially for all four years. This track season represents Kluesner’s 12th varsity letter earned for the Longhorns. He was not an all-star in any of his sports. No one is messaging him with scholarship offers. He was just a deaf kid who wanted to compete with everyone else.

He will wake up next fall with no team when he begins studying welding at Sheridan College.

“It’s scary to think of it,” Kluesner said. “This is it. It’s kind of sad I won’t be playing sports again.”

Kluesner’s parents, dad Shane and mom Maria, were the sad ones when they realized their son could not hear anything.

Kluesner, now 18, was born in Dillon, Mont., where routine hearing testing of newborns was not yet in place. The family lived 50 miles away in even smaller Lima, a community of 200-or-so.

Two things sparked concern in the Kluesners about their 3-year-old boy. Anthony had not uttered a word and when he played with noise-making toys he shook them next to his ear. He couldn’t hear words to pick up speech and he couldn’t hear squeaky-toy sounds.

The Kluesners’ first guess was that Anthony had a speech problem.

They brought him to Kitty Griffin, a speech pathologist in Dillon. Griffin, who worked with Anthony until he was in sixth grade, said the Kluesners told her, “We don’t know why he’s not talking.”

Anthony flunked some basic tests and subsequently was diagnosed as legally deaf. Doctors could find no specific reason, Shane Kleusner said, except possibly from a recessive gene in the family tree.

It might seem the problem was caught early enough that Anthony could catch up on speech skills without help. Not so, Griffin said.

“Children are talking in phrases at three,” she said. She asked the Kluesners if they wanted Anthony to learn sign language as well as develop his verbal skills. They chose both.

Kluesner’s friends, teammates and teachers may not even know he can sign. His speech is so clear it is unnecessary to use it with them.

Kluesner exhibits no self-consciousness related to his disability. If children ask what those things are hanging on the back of his ears, he patiently gives this analogy: “You know how some people need glasses to see better? I need these to hear better.”

Griffin admires this attitude because many times children are ashamed to be different. They might pretend they forgot hearing aids at home when they go to school.

“You know what’s cool about that?” Griffin said of the way Anthony handles the children’s inquiries. “The fact that he is a self-advocate.”

Cody audiologist Brandi R. Shepard said the mature manner in which Kluesner handles his disability and confronts such situations says a lot about him.

“I am in awe of him,” she said. “This kid is impressive. This kid is going to go places.”

Kluesner said only rarely has anyone made fun of him because of his hearing aids, but he shrugged it off. He is comfortable with who he is and the hand he was dealt.

“No, it didn’t bother me at all,” he said. “This is what I’m going to have for the rest of my life. There’s nothing to be ashamed of. (The hearing aids) helping me out.”

Kluesner does not sleep in his hearing aids and cannot respond to the sound of an alarm clock. But he is not above using his hearing deficit to pretend to be asleep when mom or dad try to wake him for school.

Shane said when Kluesner was first diagnosed he wondered if his son would resist wearing hearing aids or they would be a barrier to his socialization with others asking, “What’s in your ears?”

Sometimes, with a straight face, Kluesner turns things around, wielding his hearing problem in practical jokes with pals.

This is not the stuff of “America’s Funniest Home Videos,” but it demonstrates Kluesner has a sense of humor about his circumstances.

Kluesner may not use it much, but still knows his sign. Once, in the Meeteetse gym, when he was goofing off across the court from where she was sitting, Maria delivered a long-distance message.

“He was being obnoxious and I told him to stop,” she said. Kluesner sat up straight and ceased misbehaving. Busted. “It was like, ‘Oh, she saw me.’”

Learning sign language was a hedge. Maria credits his verbal language skills to his work with Griffin three days a week for years.

“I attribute everything to her,” Maria said.

When they discovered he was deaf, Shane and Maria were blindsided.

“It was such a shock,” Maria said. “You just don’t expect anything to be wrong with your son. You start thinking about the struggles he is going to have.”

Soon after the little boy received his first hearing aids, the family was outdoors and Kluesner looked at some treetops as birds chirped and said, “What’s that?”

It was a special moment for his parents. Their son could hear the birds sing.

Kluesner was in eighth grade when the family moved to Meeteetse, actually a wilderness property about 20 miles outside the tiny town.

In ninth grade he began his sports odyssey through the seasons with the football team. Meeteetse plays six-man football, so positions do not precisely match up with the common 11-man game. He has been a wide receiver and a defensive back and returned kicks.

Last fall Anthony caught three passes for one touchdown and was in on six tackles for the 7-3 Longhorns. He also may have averaged close to one dislodged hearing aid per game, but the red, white and blue devices showed up well on the green grass and no search parties were organized.

Hearing aids cost thousands of dollars and the Kluesners do not have health insurance that covers the costs. As he has grown he has had to replace pairs. His father thinks this is his fourth set. The oldest ones were pretty clunky. Not anymore.

Shane and Maria visit Kluesner’s coaches and explain his disability so they will be sensitive to his problem in practice and games.

“He is a warrior,” said Matt Jensen, Kluesner’s football coach for his entire career, as well as the school’s athletic director. “He never used it as an excuse.”

Jensen said when the Longhorns made adjustments, like a changed snap count, his teammates let him know.

Kluesner said many times whistling wind interfered with his hearing on the field and sometimes just peeling off his helmet loosened the hearing aids and he had to briefly come out of games to fix the fit.

Jensen said he instructed Kluesner to regularly maintain eye contact with him on the sideline.

“I wanted to make sure he was looking at me,” Jensen said. “I could let him know we were changing coverage.”

Zeb Hagen was both assistant football coach and head basketball coach for Kluesner’s teams. Basketball is his favorite sport and he averaged 3.7 points, 2.5 rebounds and 1.2 assists and often covered opponents’ top scorers during the 2018-19 season. He hit the game-winner against Ten Sleep, but also knocked out hearing aids pursuing loose balls.

Since Meeteetse’s schools are so small Hagen was aware of Kluesner’s hearing situation before he played.

“It was never an issue because he handled it so well,” Hagen said, although he noticed a couple of times on the basketball court Kluesner apparently not hearing an instruction. “I’ve never heard him once use it as an excuse that he couldn’t do anything.”

Other Wyoming athletes have competed with hearing aids. A few years ago, Douglas swimmer Desirae Layher was fitted with special waterproof hearing aids that allowed her to hear the starter’s gun and she won places in the state meet.

Logan Nunn of Lovell is a saddle bronc rider and team roper for Northwest College and has been a regular at Cody Nite Rodeo.

“My doctor did tell me for the rough stock riding to take them out,” Nunn said. “Team roping I leave them in.”

Kluesner, Layher and Nunn are all hearing impaired athletes with hearing aids who have adapted to a hearing world.

Not only in sports, but in everyday living, deaf people in society face many obstacles, Shepard said.

“Every single thing they do would be a challenge,” she said. “You use your ears every single minute.”

For Kluesner to compete in three sports for four years and win 12 letters goes a step beyond.

“That’s just a testament to his drive,” Shepard said.

Besides high school sports, he regularly hunts and fishes, rides snowmobiles and ATVs. He did lose one hearing aid, the right one, while riding on a side-by-side all-terrain vehicle. Poof, the one in his right ear flew away.

At regional track in Shoshoni last weekend, Anthony was part of Meeteetse’s 4×100, second-place relay team and finished fifth in the pole vault. He will compete in those events at state this week in his final high school competition.

“Just go in there and do my best and have fun,” he said of his goals. “And eat a lot of funnel cake.”

An extra reward for qualifying for state. Whatever the results, Shane is proud of his son.

“When you find out you have a child with a disability you never know what the world is going to bring to him,” he said.

If Shane worried, Kluesner’s attitude has always been, Bring it on.