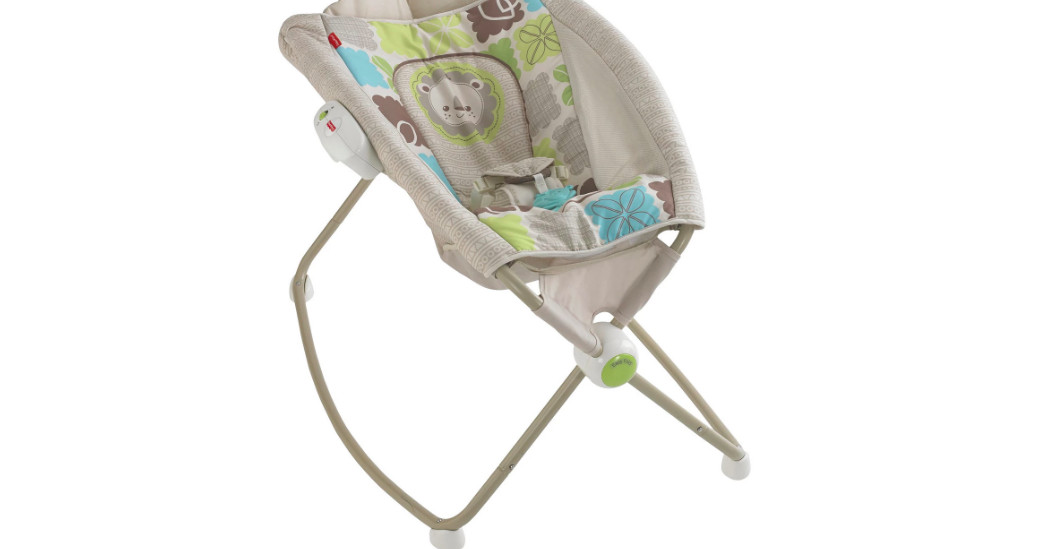 The Fisher-Price Rock ’n Play has been one of the most popular baby products on the market since it came out in 2009. A reclining baby sleeper that rocks, vibrates, and plays music, it developed a cult following among sleep-deprived parents and has been the subject of thousands of glowing reviews.

But recently, the product has come under scrutiny for safety concerns. It’s been linked to at least 32 infant deaths, and on April 12, Mattel, which owns Fisher-Price, announced it would recall all of its Rock ’n Plays. The company is advising that “consumers should immediately stop using the product.”

“Infant fatalities have occurred in Rock ’n Play Sleepers, after the infants rolled from their back to their stomach or side while unrestrained, or under other circumstances,” a joint warning from Fisher-Price and the Consumer Product Safety Commission reads.

Approximately 4.7 million products are now being recalled. The news is rattling the parenting community at a time when the baby market is booming.

How the Rock ’n Play became so popular — and so controversial

When the Rock ’n Play debuted a decade ago, it offered a solution for parents: getting infants to fall asleep without needing to be held. As pediatrician and baby sleep expert Dr. Harvey Karp of Happiest Baby has written, newborns are comforted by sound and movement because it mimics their time in the womb.

“Newborns do not sleep well. They have a poorly regulated system. And so they need a lot of assistance to fall asleep and stay asleep, and babies do tend to sleep fairly well in [Rock ’n Plays],” baby sleep expert Alexis Dubief recently told NPR. “Many parents understand that sleep in the crib is the gold standard for safety. They understand that. These are not parents who are uninformed. But they’re also miserably sleep deprived. The reality is people suffer seriously from sleep deprivation.”

As Dubief noted, the Rock ’n Play was a welcome alternative to co-sleeping, where parents sleep with their babies in their own beds. Co-sleeping has been linked to sudden infant death syndrome (SIDS), as well as other sleep-related dangers like suffocation. Some parents do it anyway because it’s a convenient way to have a baby nearby to be rocked, comforted, and fed in the middle of the night. And unlike high-end vibrating bassinets such as Karp’s Snoo, which has a $1,300 price tag, the Rock ’n Play was relatively affordable — selling for $50 to $90.

“Some call it a ‘sanity saver’: the built-in music and rocking motion will quiet down quickly even a fussy baby,” one baby gear blogger wrote in a review of the product.

“My daughter is now 3 months old and she sleeps in this every night. She started sleeping through the night at 6 weeks old and I am sure it is all thanks to this. It cuddles them in as if someone is still holding them,” another Rock ’n Play owner wrote in a review on Target’s website.

According to the baby gear blog Baby Bargains, the Rock ’n Play was so popular that Fisher-Price put out as many as 36 versions, including a smartphone-enabled edition and a rocker with several speeds.

Per Baby Bargains, the Rock ’n Play’s box read that it is “great for overnight sleep,” and the Fisher-Price website said the product’s “inclined seat helps baby sleep all night long.”

These claims, however, go against SIDS prevention guidelines put out by the American Academy of Pediatrics. Safe sleep, according to AAP, means that babies are supposed to sleep on their backs, on firm, flat surfaces that don’t move, without any pillows or blankets. These guidelines aim to curb SIDS because they limit suffocation factors, as no one knows the exact cause of SIDS. Since the AAP issued these guidelines in 1992, the number of SIDS-related deaths has decreased dramatically.

Safe sleep, according to AAP, means that babies are supposed to sleep on their backs, on firm, flat surfaces that don’t move, without any pillows or blankets

The reclining position of the Rock ’n Play, however, can put babies at risk of compromised airways and limited breathing, known as asphyxia. Some Rock ’n Play models also come with pillow headrests and toys, which could provide further risk of suffocation.

Health professionals have been warning for years that the Rock ’n Play is unsafe.

“As a pediatrician and parent consumer, I believe it is irresponsible to promote the Rock ’n Play Sleeper as a safe, overnight sleeping option for infants. By continuing to do so, you are putting babies at risk,” pediatrician Natasha Burgert wrote in an open letter to the company in 2015. “I am asking you to consider re-marketing the Rock ’n Play Sleeper as a comfortable, portable infant seat; to be used for observed play, and as a temporary place for brief rest.”

Parents, however, have continued to use the Rock ’n Play for prolonged periods of sleep, especially those caring for infants experiencing acid reflux. Some parents believed sleeping at an incline would help these babies (even though the theory has largely been debunked by medical professionals). In 2013, when Emory University pediatrics professor Roy Benaroch wrote a detailed blog post about the hazards of the Rock ’n Play, angry parents fired back at him.

“You must not have experience with reflux babies. My kids couldn’t sleep flat on their backs or bellies until 8 months. That thing is a lifesaver!!!” one commenter wrote.

The deaths linked to the Rock ’n Play

On April 8, Consumer Reports released a detailed account of how the Rock ’n Play has been linked to at least 32 infant deaths between 2011 and 2018. The report found several cases in which babies died in the Rock ’n Play due to asphyxia.

This came on the heels of a November story from the Wall Street Journal, which reported that the Consumer Product Safety Commission was aware of at least 700 injuries since 2005 connected to inclined baby sleepers.

After being confronted by Consumer Reports about the infant deaths, CPSC and Fisher-Price issued a warning that parents should stop using the Rock ’n Play with babies older than 3 months, as well as with babies who can start rolling over. (Last year, a 6-month-old baby died in a Rock ’n Play after rolling over in it and suffocating.)

The original instructions for the product stated that the Rock ’n Play was limited to babies who weighed at least 25 pounds (the average weight of a 15-month-old), so this warning came as a reversal. But the American Academy of Pediatrics pointed out that a warning is not enough for a potentially deadly product. On April 9, it called on Fisher-Price to take action.

“We cannot put any more children’s lives at risk by keeping these dangerous products on the shelves,” Dr. Rachel Moon of the AAP said in a statement. “The Rock ’n Play inclined sleeper should be removed from the market immediately. It does not meet the AAP’s recommendations for a safe sleep environment for any baby.”

Fisher-Price and the CPSC issued a recall three days after the AAP’s statement. The recall warning recommends that parents stop using the Rock ’n Play immediately, and Mattel is issuing refunds to shoppers who’ve purchased the product in the past six months. Sites like Amazon have pulled all of their Rock ’n Play products, as has Buy Buy Baby.

Some parents who spoke with Consumer Reports noted that they were drawn to the Rock ’n Play in part because it was made by such a trusted company as Fisher-Price. When turning to the internet, though, they found that product reviews were littered with complaints that the sleeper wasn’t safe.

“I bought this because I thought an incline would help my infant sleep better with reflux symptoms but it is too deep for her and so her neck looked awkward when lying in it,” one reviewer wrote in 2015. “Needless to say I returned it right away.”

Mattel, for its part, is not admitting to any product flaws. In an emailed statement to Vox, Fisher-Price vice president Chuck Scothon said, “We stand by the safety of our products. However, due to reported incidents in which the product was used contrary to the safety warnings and instructions, we have decided to conduct a voluntary recall of the Rock ’n Play Sleeper.”

Last year, when the Journal reached out to Mattel about a complaint filed against it for the death of the 6-month-old related to a Rock ’n Play, the company said it “strongly recommends parents read the instructions prior to use of their sleeper and follow those instructions to ensure a safe sleep environment for babies.”

This isn’t the first time a baby sleeper has faced criticism, nor is it likely to be the last. In 2013, a product called the Nap Nanny was recalled after it was linked to five infant deaths, as well as 92 incidents of babies falling out of the sleeper. Last year, Canada issued a warning against another popular alternative to co-sleeping: products like the DockATot, which is a baby bed meant to be placed in parents’ beds. The product claims to “offers a better way to co-sleep,” but doctors have said that with its soft, raised walls, “a baby can easily obstruct its airway by turning towards one of those elevated sides.”

The US Food and Drug Administration, too, has advised parents against using baby sleep products that claim to be “nests” or “anti-rollers” because of their increased risks of suffocation, but the DockATot is still an Amazon best-seller and is openly endorsed as a sleeping product by celebrities like Kourtney Kardashian and Lauren Conrad. And Consumer Reports has already linked at least four infant deaths to the Ingenuity Moonlight Rocking Sleeper, a product similar to the Rock ’n Play made by the company Kids II. Like Mattel, Kids II told Consumer Reports, “In the four cases, there were either extenuating circumstances not relating to the sleep product or a failure to follow instructions and warnings. No incidents were a result of product malfunction or design.” As of now, it’s still for sale.

Want more stories from The Goods by Vox? Sign up for our newsletter here.