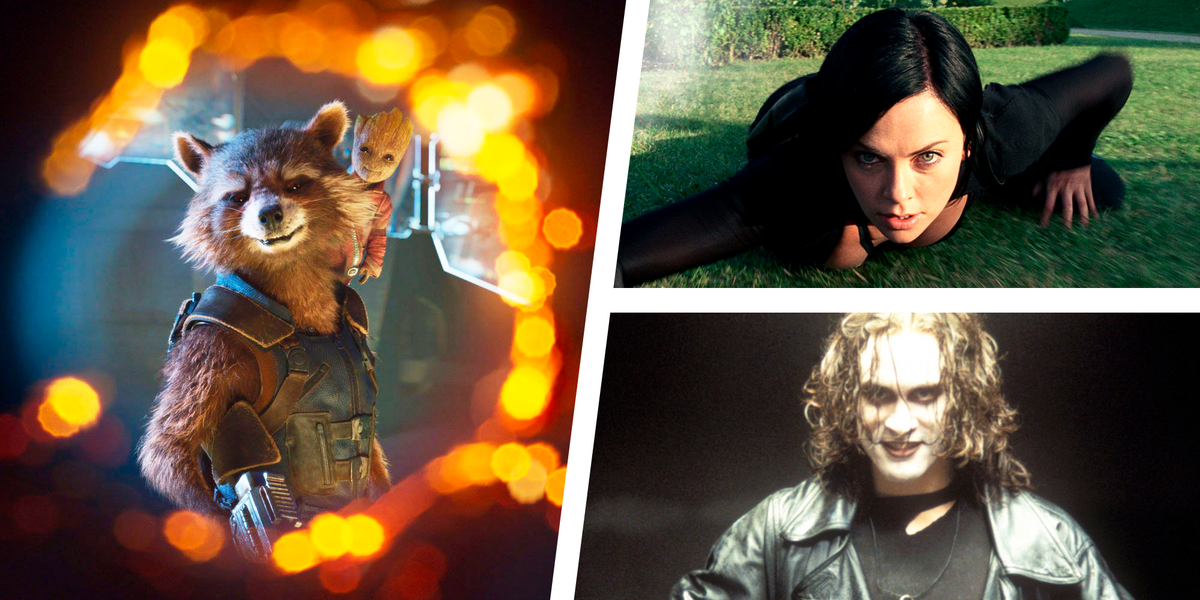 One of the best things to ever happen to the summer blockbuster was when former toy mogul Avi Arad realized his licensing partner Marvel Comics was sitting on an intellectual property goldmine. There were superhero movies before then–Richard Donner’s Superman and Tim Burton’s Batman come to mind–but thanks to Marvel’s aggressive move to the silver screen, we’re now in the Golden Age of the mega-budget superhero movie.

There’s lots of Marvel and DC content on Netflix, but most of it is in TV shows like The Flash, Arrow, Gotham, The Defenders, Iron Fist, Supergirl, Daredevil–you name it. They’re great, but sometimes you’re just in the mood for a movie –maybe even another culture’s take on the superhero myth. We’ve put together a list of 14 superhero flicks now streaming on Netflix that you may have overlooked–plus some mainstream hits that deserve another viewing.

How did this hidden gem get lost in 2015’s crush of superhero films? A nebbishy schoolteacher (Simon Pegg) becomes the unwitting guinea pig of an alien council (voiced by John Cleese, Eric Idle, Michael Palin, Terry Jones, and Terry Gilliam) trying to decide whether to destroy Earth. They grant omnipotence to this random nobody and wait to see whether he uses it for selfish or unselfish gain. (Which category does his wish “Let me have a penis that women find exciting” fall under?) This Groundhog Day-ish parody of the superhero origin story is the first film to reunite the five then-surviving Monty Python members since The Life of Brian – not surprising, since it was directed and co-written by Terry Jones. (It’s also Robin Williams’s final screen role, as the voice of our hero’s dog.) Absolutely Anything is a frothy, fun fantasy, but it’s also got a pleasantly British edge that’s not afraid of unlikeable characters and jokes too dark for American movies.

Okay, so Richard Thorncroft (Julian Barratt) technically isn’t really a superhero. He just played one on Mindhorn, a cheesy cult ‘80s show that made Manimal look like Dostoyevsky. Now he’s flabby, forgotten, and desperate for work – but his fortunes change when a delusional fugitive insists he’ll only surrender to his favorite cybernetic detective. When law enforcement begs him to help in the manhunt, he’s happy to don the eyepatch for what he thinks is his comeback — only to quickly realize the outer limits of his buffoonery. A side note: where do movie serial killers shop for the red yarn and thumbtacks they need for their wall-sized crazy collages? This suspect’s got a collector’s lair that’ll make any memorabilia hoarder jealous.

Director Karyn Kusama (Girlfight) and Charlize Theron had a tough act to follow. Peter Chung’s original Æon Flux cartoon (part of MTV’s alt-animation showcase Liquid Television) serialized the adventures of the titular fetish-clad razorgirl in a style that merged anime with German Expressionism. They inevitably fell short, but the live action Æon Flux is worth a revisit – not because it’s any good, let’s be clear, but because it’s a forgotten side alley of artsy ‘90s cyberpunk where pools of liquid hold memories and blades of grass really act like blades. (It’s a shame we can’t watch Kusama’s director’s cut after nervous studio exes cut her original vision to the bone.) Plus, Frances McDormand’s in it – and no movie with Frances McDormand can be all bad.

They Call Me Jeeg

If you felt Logan was too sweetness and light, this Italian superhero drama is for you. A low-level hoodlum (Claudio Santamaria) gets doused in radioactive goop and gains superpowers. The goop can’t give him ambition or a moral core, however, so the best he can manage is accidental YouTube notoriety and a semi-relationship with an emotionally arrested woman (Ilenia Pastorelli). Add in Catholic guilt, ugly apartments, matter-of-fact sex between broken people, and a glam rock mafioso who’s a former reality show star, and you’ve got a real guttercrawl.

would have been a mainstream box office hit if audiences hadn’t flocked to it because of its notoriety. (Maybe not, because of its stomach-crawling rape scenes and grimy squalor.) But that’s not what its sizeable cult loves about this bittersweet rape-revenge tale directed by Alex Proyas, who returned to a shadowy urban netherworld with his other cult movie Dark City. And then there’s the lead performance: in his own smoldering, tortured way, Brandon Lee was just as charismatic as his father, and his loss adds a veneer of heartbreak to an already elegiac tale. The Crow is a grunge goth Batman that deserves to be more than the answer to a trivia question.

American superhero movies don’t have a monopoly on franchises, and it was only a matter of time before Bollywood got into the superhero game. Krrish

is the sequel to the playful Koi . . . Mil Gaya (also on Netflix, along with the trilogy’s conclusion Krrish 2), the story of how the mentally disabled son of an extraterrestrial life researcher becomes a superhero after coming into contact with an adorable blue-skinned alien. But Krrish is, as George Lucas used to say, faster and more intense, with its hunked-up star Hrithik Roshan struggling with his secret identity while battling a computer that can predict the future, saving children from a circus fire, and wooing the woman he loves. (Priyanka Chopra). And yes, there are song and dance numbers.

No, it’s not the tale of a porn star who gets bitten by a radioactive butt plug. This innovative (or gimmicky, depending on your opinion) cinematic experiment is told from the POV of its amnesiac and mute protagonist who’s had his body rebuilt with cybernetic implants. He’s got to rescue his kidnapped wife before the juice in his implants runs out, and the entire movie feels like a live action first person shooter video game. This movie is a rare true “love it or hate it”, with critical opinion split right down the 50% middle on Rotten Tomatoes. (Some internet cynics described it as “a feature length cut scene”.) But I’m one of the “love its” – it reminds me of the opening scene tour of the alien slums in District 9, or Robocop crossed with Man Bites Dog, the dark mockmentary told from the POV of a film crew following a serial killer.

Hear me out now – yes, it’s a kid’s movie. Yes, the brother and sister spy duo (Daryl Sabara and Alexa PenaVega) are superheroes more in the gadget-heavy, un-superpowered Batman mold. But when was the last time you saw Danny Trejo in a Disney movie? Director Robert Rodriguez (From Dusk Till Dawn, Sin City) has created a surreal, fun, rollicking adventure of a movie that’s appropriate for kids and a real surprise for parents who don’t expect something this polished. It’s a cult classic just waiting to happen among open-minded adults.

American superhero movies self-segregate into dimly lit and grave, or bright, colorful, and epic. Avengers: Infinity War is a triumph just from a screenwriting perspective — how would YOU like to be assigned a screenplay with nearly thirty named, major characters whose all-over-the-place motivations all need to funnel into the same scorched earth conclusion? But this thrilling, poignant megabattle against nihilism merges those two moods into a rich and complex vision that’s just as nuanced as archvillain Thanos’s “you know, the guy has a point” evil plan. The sequel is coming, but that doesn’t diminish its will-everything-be-all-right? cliffhanger.

Scott Pilgrim vs. The World

Adorkable slacker Scott Pilgrim (Michael Cera) isn’t superpowered. But every one of the “Seven Deadly Exes” he’s got to defeat in his quest to win the heart of the turquoise-haired Helen of Troy named Ramona Flowers (Mary Elizabeth Winstead) is. This cheeky geek comedy from director and co-writer Edgar Wright (Baby Driver) borrows its look from 16-bit classics, with Scott snatching power-ups out of the air and “pee bars” measuring how full his bladder is. Best of all, some of the Seven Exes are played by actors like Chris Evans and Brandon Routh, who happily mock their superhero resume, Birdman style, with ridiculous characters like Routh’s psychic vegan whose Kryptonite is coffee with real dairy.

A million Alan Moore fans howl a dull roar of protest that Watchmen’s on this list. I wasn’t impressed by this adaptation of THE superhero graphic novel when it first came out: how can you love something that’s a mere shadow of a masterpiece? But on second viewing, it’s clear how complex, nuanced, and beautifully art-directed even a shadow can be. Jackie Earle Haley’s embodiment of the uncompromising and brutal Rorschach is everything a purist could want. And hey, this is Men’s Health – if you need fitness goals, look no further than Dr. Manhattan and his bravely swinging wing-wang.

Guardians of the Galaxy, vol. 2

This dorm room black light poster come to life is, deep down, about a family, and it’s hard to pick a favorite member – deadpan Drax (Dave Bautista)? Squeeable baby Groot (Vin Diesel)? No guff Rocket Raccoon (Bradley Cooper)? Or Gamora (Zoe Saldana), the green-skinned tough cookie who won’t admit she’s as much in love-hate with Peter “Starlord” Quill (Chris Pratt) as he is with her? But a yearning for family is the Achilles heel that gets the whole crew into trouble this go-round, when Starlord’s intergalactic father he never knew (Kurt Russell) informs him he’s of noble alien heritage. It’s easy to make a gritty reboot of anything, but this Marvel movie perfectly captures the cosmic “Merry Marvel Marching Society” bongwater vibe of far-out 1970s fandom.

Even a studio as all-cylinders as Pixar can lose momentum when it takes fourteen years to make a sequel. Luckily, that didn’t happen when writer/director Brad Bird (The Iron Giant) found a way to continue the story of the superpowered Parr family that’s still above-par. This time, it’s mom Elastigirl (Holly Hunter) who gets her mojo back after she’s recruited to convince the public it’s time to make being a superhero legal again. The whole look of the 1950s-inspired movie is fun, but it’s worth watching it just for Elastigirl’s battle against the villain Screenslaver. Skip it if you’ve got a seizure disorder, but their fisticuffs in a box lined with disorienting bullseye LED patterns is one of the most striking moments in animation, computer or otherwise.

I know – you’ve seen it. It’s great. And ground-breaking. What else can be said? But consider this: you’re reading the Men’s Health website to get tips on becoming a better man, right? And what better man is T’Challa? He’s fit. He’s brave. He knows right from wrong. He loves his family. He has pride in where he comes from, where he is, and where he’s going. And the strong women in his life know it too – even if they tease him sometimes, or wish he’d tell them he loves them more often. That’s why they’re there for him in his darkest hour, in a way they refuse to be for Killmonger, who thinks women are disposable on his way to a world domination that never happens. So when you’re doing your crunches, or making that protein shake, or prepping for that big meeting, or even putting those sex tips to good use, keep a little Wakanda in your heart. Everyone’s gonna be happier that way – especially you.