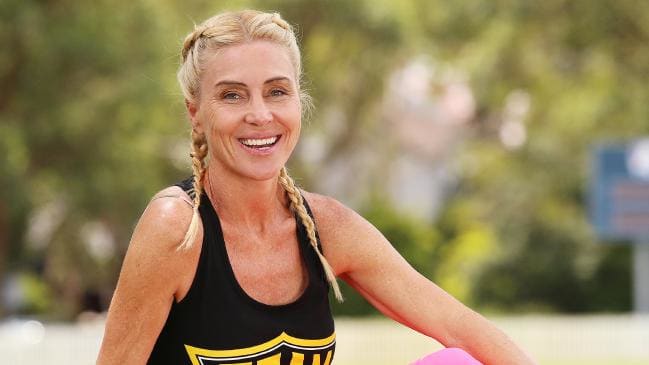 You might have thought Susie Maroney’s epic ocean swim from Cuba to Florida — a 39-hour epic that saw the then 22-year-old Australian fighting both stingers and extreme nausea most of the way — might have turned her off the water for good.

But even now, the 44-year-old mother of three describes the water as her happy place, and she says she seeks solace in her local pool every single day.

“That Cuba to America swim was the hardest; 39 hours in water, you’re getting stung by jellyfish and vomiting, it was just terrible,” she says.

“But I still swim every morning. I make the kids swim for an hour every day, and I go in the other lane and I just focus on my stroke.

“That’s my mum time for the hour.

“There are no distractions, no mobile phones, and it allows me to just completely zone out. Besides, having swum the English Channel, a little bit of cold water doesn’t bother me much.”

Susie’s greatest hits are simply incredible. There was the Cuba to Florida swim, of course, plus she was the fastest woman to cross the English Channel twice (a feat she achieved at just 17). She also swam the 197km from Mexico to Cuba, then from Jamaica to Cuba, too.

These days, though, the Order of Australia Medal recipient takes a far more relaxed approach to her training.

“I just want to be healthy for my age,” she says. “I’m 44 now, and I have three children, so really my goal is to keep up with them.

“So I swim in the morning, and then in the afternoon I might go for a long walk while kids are doing an after-school activity.

“At this age, I just want to be able to use my body and to keep relatively fit as I move into older life. It’s about practical fitness now that I’m not doing so many marathon swims.”

Like most kids of her generation, Susie says she was raised on a diet of “party pies and fish fingers”, but she says she’s developed some tricks to ensure her kids have a healthier upbringing.

“It’s never easy. I’m a busy, single mum, so I find I emotionally eat sometimes. But you can do as much exercise as you want, if you’re not going your getting proper nutrition, then it’s not going to effective,” she says.

“So for me, that can be a shake in the morning, which is something fast and easy and you know you’re having something good. And we park further away from school now and walk the rest of the way, too. The kids don’t know, but we’re actually exercising.

“But the biggest trick is just to leave healthy snacks around the house. Things like watermelon, grapes, vegetables, those kinds of things. And eventually, when the kids get hungry enough, they’ll pick at them. It really works.”

HOW TO HACK ACHIEVING A GOAL

Susie Maroney knows a thing or two about achieving the impossible. Here she shares with us her tips for tackling a big goal.

Focus on the big picture

“Always focus on a goal,” she says. “If you’re struggling with motivation, just write down your goal in your diary 12 weeks out, and then focus on what you need to do to get there.”

“We’ve all had those days when the kids are diving you crazy or you’ve eaten badly,” she says. “But the trick is to put it behind you as fast as you can and get right back on track.”

Hi Adam, the weather will soon be cooling down, and that means flus and colds will be everywhere again. Have you got any tips for fighting them off?

Obviously you want to avoid getting the flu (and vaccination is one good option, but so is getting good sleep and regular exercise, both of which will help keep your immune system fighting fit). But if you do get the sick, you can shorten the virus’ impacts with a very simple trick. Hydration is the key, and it will help you flush the toxins from your body. Most important, though, is that you don’t have to tough it out. Rest, let your body recover, and you’ll be back on your feet in no time.

Adam MacDougall is a former NRL player and the creator of The Man Shake. Continue the conversation @adammacdougall5