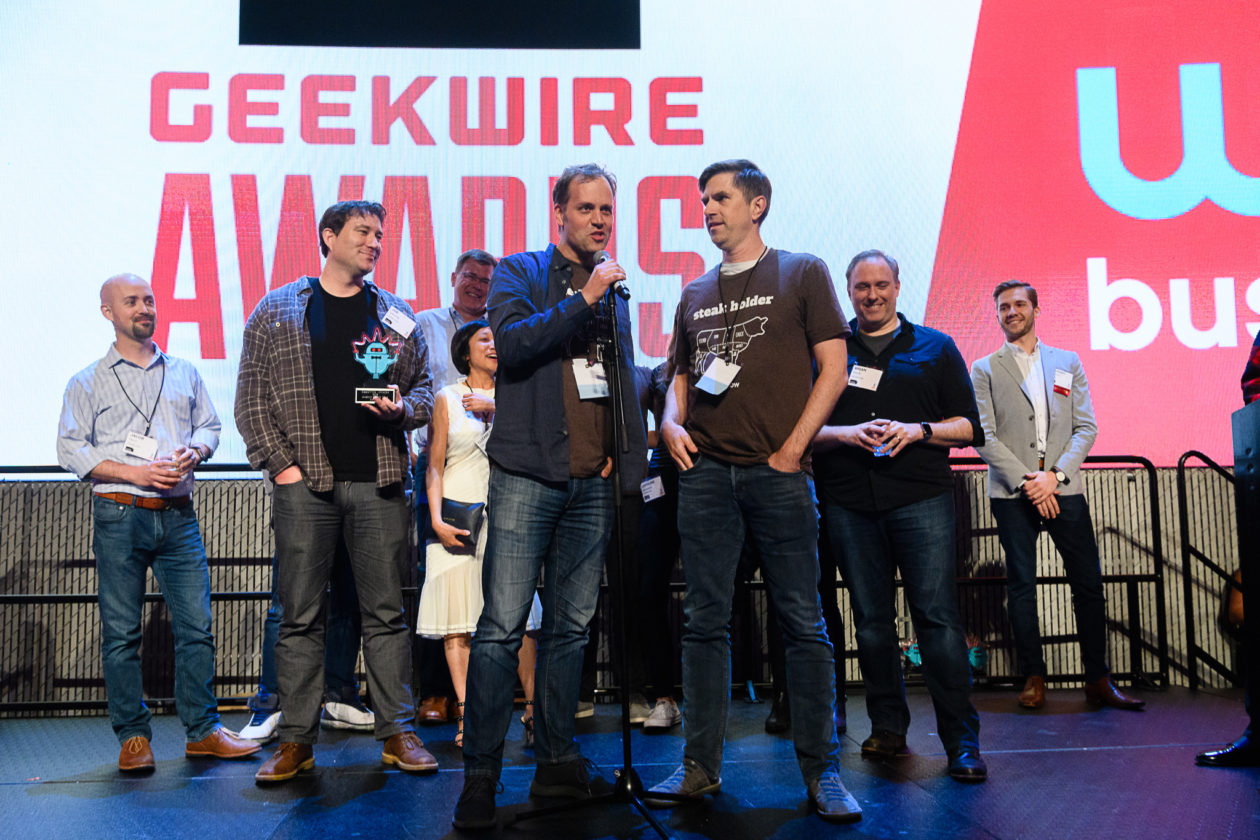 A quick gander at the GeekWire 200, our index of Pacific Northwest startups, shows the density of up-and-coming tech companies based in this region. That’s what makes the five nominees for this year’s Startup of the Year category at the 2019 GeekWire Awards all the more impressive. 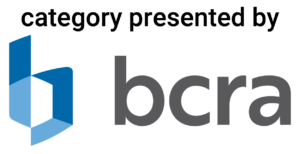 Amperity, Boundless, The Riveter, Rubica, and Sana Biotechnology beat out a bevy of other early-stage startups as nominees for a category that has honored fast-growing companies such as Crowd Cow, Convoy, Arivale, Rover, and others in the past.

We’ve opened voting in 11 GeekWire Awards categories, and community votes will be factored in with feedback from more than 30 judges. On May 2 we will announce the winners live on stage at the GeekWire Awards — presented by Wave Business — in front of more than 800 geeks at the Museum of Pop Culture in Seattle. Community voting ends April 19.

This year’s nominees are using technology to disrupt everything from gene editing to cybersecurity — read more about them below and vote on all the categories while you’re here. And don’t forget to grab your tickets here, as the GeekWire Awards sell out every year.

Create your own user feedback survey

Amperity launched a year-and-a-half ago and already has clients such as GAP, Nordstrom, Alaska Airlines, Wynn Hotels, and others who use its customer data technology platform. The company made headlines in October 2017 when it raised funding from Tiger Global Management, a New York-based firm known globally for making long-term investments in companies including Spotify, Facebook, LinkedIn, Flipkart, and other tech giants.

The Seattle startup is led by co-founders Kabir Shahani and Derek Slager. The entrepreneurs previously started Appature and sold the Seattle-based healthcare marketing startup to IMS Health in 2013.

Amberity CEO Kabir Shahani: “It’s still early days for us, but it will come as no surprise that our secret sauce is absolutely our people. We are fortunate to have attracted a world-class team, that beyond having skills, experience, and ambition that is unrivaled, are just wonderful to spend time with. This has been foundational to our ability to attract and maintain world-class customers like Gap, Nordstrom, Wynn Hotels, Alaska Airlines, and several other iconic consumer brands.

The support of these organizations and the forward thinking leaders in these companies that took a chance on us early in our journey, have allowed us the opportunity to be an iconic company ourselves one day. We’re fortunate that all of this started with unwavering support from our investors and a strong board of directors that continually push us to be bold and ambitious in the pursuit of our mission to enable the world’s most loved brands to use data to unleash the full potential of their teams, and in turn create meaningful customer experiences.”

Shahani: “Every entrepreneur starts their journey with clarity of vision to make something better. I find that it’s important to be bold in your ambition when trying to solve that problem, and reduce the noise at each step of the way, including your own self-talk. I’ve found that every time I focus on the opportunity at-hand, in its largest, most audacious form, and work to enable those around me to achieve their goals against that vision, all the right things happen.”

In the two years since it launched, Boundless has become the top destination for immigrants applying for marriage-based green cards in the United States. The company, a spinout of Seattle startup studio Pioneer Square Labs, helps customers connect with attorneys, file applications online, and receive support throughout the immigration process. It also publishes research and resources on its website to help immigrants navigate an increasingly complex system.

Boundless CEO Xiao Wang: “Creating an environment and culture where people can thrive. One of the huge advantages of being an early-stage startup is to be able to deliberately craft the type of place you have always wanted to work at. I think that everyone is capable of doing incredible work, but often organizations put into place structures, policies, and processes that deliberately hamper the motivation and effectiveness of its employees.

What we take seriously is to continuously evaluate how we operate — establishing the right levels of ownership, autonomy, and trust — that makes Boundless a place people want to build at. Are we perfect? Not even close. But as with everything else at Boundless, we will never stop experimenting and working at making it better.”

Wang: “First, it’s to focus. When you are building something new, there are an infinite number of opportunities that have potential or should be pursued. It is so easy (and usually it’s the entrepreneur’s fault) to fall into the trap of ‘let’s just add one more thing to this project’ or ‘what if we just tried that?’ In nearly all cases, you’re better off pursuing fewer initiatives at a deeper level than to scatter your precious time and resources. Spreading too thin often results to lots of inconclusive results that barely move the needle. Focus on the few things that matter.

Second, it’s to hire people who are better than you. Looking across my team, each one of my reports is much, much better at their areas than I am, which is exactly how it should be. Your job is to find and convince these people to leave well-paying, stable jobs to join your crazy idea, and then to clear as many obstacles as possible so that they can do their best work.”

Founded in 2017, The Riveter differentiates itself from other co-working spaces by providing amenities, programming, and other membership perks geared toward female professionals. The company, which is open to all genders, raised a $15 million investment round last year that is helping it expand across the nation. Last month it opened its sixth location in Austin, Texas, and has plans to launch in Dallas, Denver, Portland, Ore., Minneapolis – St. Paul, and Atlanta. The plan is to reach 100 locations by 2022.

The Riveter, which won the Newcomer of the Year category at the 2017 GeekWire Awards, was co-founded by Amy Nelson, a former Wall Street lawyer who helped launch the company after continuously running into “bro-working” spaces.

The Riveter CEO Amy Nelson: “We (and I do mean ‘we’ – this is an enormous collective effort) are building something we believe the world needs and we are emboldened by the fact that we need it, too. We live in a world where we welcome A.I. into our homes and yet current trends show that men and women will continue to be compensated — and, valued — differently for 100 years, until the year 2119. We know we can do better and we’re building a movement and a company around that fact. Our need for a different tomorrow drives us when it’s hard — and it’s often hard. In less than two years, we’ve accomplished a lot but we know there is so much more work to be done.”

What are one or two pieces of advice for other entrepreneurs? “The first is simple, hire a team of colleagues who you believe are smarter than you and who bring experience to the table that you don’t have. We have an incredible team of 51 people and every person brings something unique to what we’re building — and something we very much need.

Second, lean into and highlight the differences that make you strong. I’m pregnant with my fourth daughter in four years. In a world where less than 3 percent of VC dollars go to all-female founding teams (and I believe The Riveter is the only all-female founding team in this category), I’ve been visibly pregnant or breastfeeding while raising every cent of the $21 million we’ve secured to grow The Riveter. Rather than hiding this or downplaying it, I talk a lot with investors, partners and teammates about how motherhood has made me a better leader. We can reframe the things society sees as weaknesses into the absolute strengths that they are.”

Rubica began as a research-and-design project focused on advanced cybersecurity within Concentric Advisors, a company the provides physical and digital security to prominent and high-net-worth families. In 2016, Concentric spun out its cyber division to become Rubica. The Seattle startup aims to protect both individuals and their families from cyberattacks.

Frances Dewing, previously an exec at Concentric, co-founded Rubica with Roderick Jones, a cybersecurity expert and former colleague at Concentric. The company has raised more than $13 million from both angel investors and venture capital firms.

Rubica CEO Frances Dewing: “Our people, and our inclusive culture. We’ve created an environment where people can trust each other and take risks and challenge the status quo. Rubica is a place of comradery where people are empowered to bring their multifaceted talents. We have cyber analysts who are also talented artists, software engineers with law degrees, and security professionals with creative writing skills. This collective creativity and diverse intelligence is the engine of our scrappy, innovative, mission-driven team.”

Dewing: “Be genuine. Be honest and transparent with your team. It builds trust – and trust is crucial on the rollercoaster ride of startups! The Rubica team knows that we are in this together, and that I will not abandon them or leave them in the dark. I’m honest about what’s working and what’s not, and we take the wins and losses together. When people know you mean it, and you’re all in, then they are too.

Hire people that aren’t like you. Surround yourself with smart people that fill in your weaknesses. Intentionally look for people that are different or better than you in some way. This requires putting ego aside, but that’s what will allow you to build a winning team.”

Backed by ARCH Venture Partners, Flagship Pioneering and F-Prime Capital Partners, the company has an experienced leadership team that previously co-founded Juno, another Seattle biotech startup that was sold to Celgene last year for $9 billion. Sana is reportedly working on a Series A funding round with the goal of raising between $800 million and $1 billion, according to Axios.

Sana CEO Steve Harr: “Sana focuses on the most challenging issues in understanding how to engineer biology to make important medicines. This vision and willingness to tackle big problems has attracted a unique and talented group of people, who are Sana’s secret sauce.”