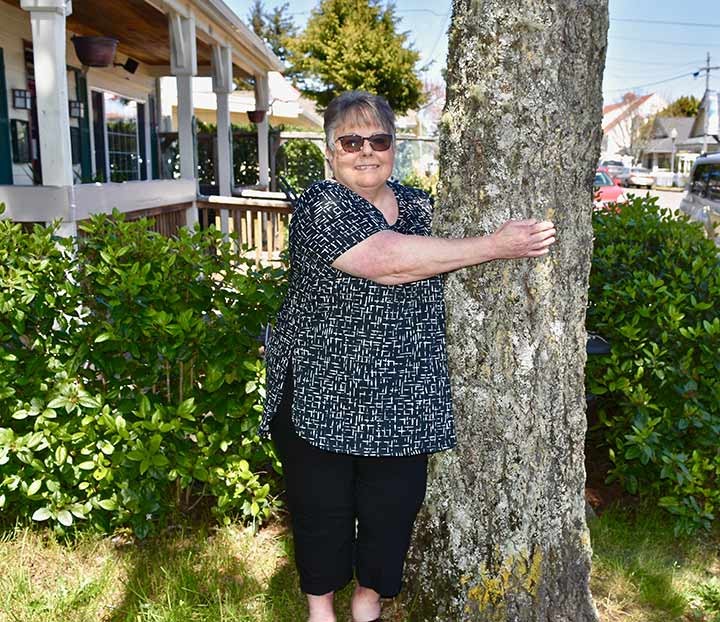 May 15, 2019 — Sometimes a terrible tragedy can indirectly produce some good. Occasionally, that good takes root, grows and flourishes.

Fortunately, sadness and grief have a way of diminishing over time, allowing those impacted by death or loss to take the experience and use it to educate, inform and inspire others.

That is certainly the case when considering the life and work of Florence resident Jacquie Beveridge, who has turned a personal tragedy into a life-saving education template for search and rescue organizations across the country.

Beveridge, a retired law enforcement officer, is known for volunteerism and her long-standing commitment to support first responders, service personnel, veterans and students. She has spent a great deal of time raising awareness on a variety of issues related to children’s safety and education, in addition to being a leader in the Oregon Dunes Chapter of the National Society of the Daughters of the American Revolution (DAR).

Beveridge is also a mother who has experienced the pain of losing a young child.

One of the most meaningful causes that Beveridge has embraced is a program called “Hug-A-Tree and Survive, which stems from a personal tragedy that struck her family in 1981.

The program was created after the death of Beveridge’s young son, Jimmy, who became lost while on a family camping trip in the hills outside of San Diego.

The program is now overseen by the State of Oregon, although Beveridge remains involved with networking and promotion of the program.

“Oregon State Parks is doing the program now, and last September Katie Pollut, an Interpretive Ranger, presented the program twice at Honeyman (State Park),” Beveridge said. “I talked with Police Chief Tom Turner and suggested, since we now have a School Resource Officer, it might be time to get Brandon [Bailey] trained to do it.”

That conversation led directly to the upcoming May 20 presentation at Siuslaw Elementary School.

Beveridge recently sat down with the Siuslaw News to provide background information on the internationally successful Hug-a-Tree program, and also take the opportunity to share the lessons she has learned in the nearly 40 years since her son’s death. Beveridge said these difficult lessons were the result of her a determination to make sure that her son’s death would not be the end of his story.

Beveridge takes a deep, full breath and visibly steadies herself before sharing the painful memories from decades ago…

The weekend weather forecast for San Diego hills wasn’t a major concern for a family looking to get away for a few days. The forecast called for a mix of sunshine and precipitation, but no major weather systems were in the area during her family camping trip back in 1981.

Beveridge, her husband Larry, and their three sons — Robbie, 15, Jeffrey, 7, and Jimmy, 9 — decided they would take a short camping trip to Palomar Mountain in San Diego County.

Larry and Jacquie parked the RV they had rented for the weekend at their site, letting the rambunctious tangle of boys with them explore the woods around the campsite.

The sounds of her sons having fun as they went to play was familiar to the parents and they were relatively unconcerned as the boys ran off to play in the forest. A short time later, Robbie and Jeffrey returned to camp expecting to see Jimmy, who had raced ahead of his brothers to the site.

But Jimmy had never arrived.

Larry and Jackie searched for a short period, thinking Jimmy would soon be found or return as the family started to prepare dinner. After both parents were unable to locate the 9-year old boy, the gravity of the situation became clear.

Authorities were called and search parties were formed. Within a few hours, a well-organized group of searchers was beginning to deploy on Palomar Mountain. Unfortunately, the weather had changed. It had become cold and rainy, turning the search for Jimmy into a race against time and the elements.

“It evolved into the largest search in the history of San Diego County,” Beveridge said. “There were eventually 200 marines and various search and rescue teams from throughout the state — some even came from Arizona. And many volunteers that were there to help in any way they could.”

As darkness descended, the once optimistic family grew distraught as search and rescue teams were still unable to locate the missing boy. The search soon grew to include the San Diego community at-large, with church groups and volunteers showing up at Palomar throughout the night, and into early morning to walk the search grid that rescuers had created.

And then a third day.

Optimism that Jimmy would be found safe began to diminish.

Helicopters were grounded due to the low cloud ceiling and search dogs were ineffective due to an unusually high amount of rain. Finally, during a break in the weather on Tuesday, an aerial spotters flying above the search area in a news chopper found a clue to Jimmy’s whereabouts.

Searchers were directed to the area, where they found Jimmy at the base of a tree, a victim of hypothermia.

The tragedy that took Jimmy Beveridge’s life would propel his family — and in particular his mother — to help prevent the same tragedy from happening to other families. This was in part prompted by the hundreds of letters of condolence and sympathy the family received, many from strangers after Jimmy was found.

“We got letters from all over the country. Some were simply addressed to the ‘Beveridge family’ and our mailman delivered them,” she said. “There was such an outpouring of concern that, within a month of Jimmy’s death, the program came together.”

Beveridge immediately began working on a short educational presentation to share some simple facts with young people who might get lost in the woods. Most of those early concepts are still included in Hug-A-Tree presentations.

The concepts shared in the Hug-a-Tree Program are easy to remember because, like its namesake suggests, it begins by actually hugging a tree.

“Staying in one place increases your chances of being found. The further you wander, the larger the search area becomes — and the harder it is to find someone that is lost.”

The response to the initial version of the Hug-a-Tree program was positive and, soon, school districts and eventually the National Association for Search and Rescue incorporated the program into the groups educational outreach efforts.

Other easy steps that Hug-A-Tree teaches to increase an individual’s chances of surviving in the wild include carrying a whistle to signal others and a trash bag for warmth and to stay dry.

The first set of ideas that Beveridge wrote down and shared has been modified over the years and the program has been expanded to include training for all ages.

The later versions of the program have been a mainstay of Canadian Search and Rescue efforts for years and the concepts are part of school curriculums across both countries.

Beveridge has remained involved peripherally with Hug-a-Tree over the years and continues to share the information in the program with others. She was instrumental in bringing the Hug-a-Tree Program to SES next week and hopes to continue her involvement with the organization, which remains close to her heart.

Beveridge also shared a story that spoke to the need for common sense planning from people of all ages when they are venturing into the great outdoors.

“Two weeks ago, a 50-plus-year-old friend of mine was saved because of the program. She and I met a number of years ago and I talked to her about the program. She is an artist who lives in Canada and had gone out walking — and she wasn’t prepared for the weather,” Beveridge explained, then paused to offer a teary smile. “But she remembered what I had shared with her about staying put and staying warm. And she survived because of what she had learned.”

For survival tips for people of all ages, visit www.nasar.org/education/hug-a-tree.