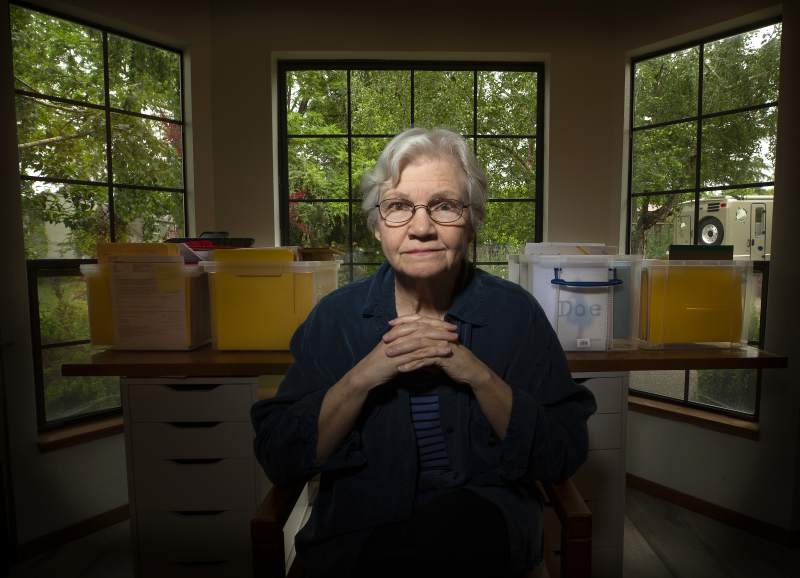 The press conference to announce the solving of a 37-year-old cold case murder took place Tuesday at the Washoe County Sheriff’s Office in Reno, Nevada.

The optics were arresting: Standing amid imposing law enforcement officials were a pair of unassuming elderly women — “two little old ladies,” wisecracked one of them, Colleen Fitzpatrick. The other was white-haired, wire-rimmed, 72-year-old Margaret Press who made the four-hour drive from her home in Sebastopol the day before.

A retired linguist, computer programmer, crime novelist and grandmother, Press also happens to be one of the world’s top experts in the use of genetic geneology to crack cold cases. It quickly became clear, after she made her way to the podium, that without her and Fitzpatrick, the case in question would still be frigid.

They are the co-founders of 2-year-old DNA Doe Project, a crowdsourcing group of citizen scientists who use genetic geneology to help close the book on long unsolved murder mysteries.

They specialize in identifying victims.

“We keep our mission very clear,” Press said in an interview. “We focus on John and Jane Does, not suspects. I’d love to get the suspects solved, but someone else can do it.”

There are other outfits devoted to identifying victims, but none with the expertise offered by Press, Fitzpatrick and their group — “the tough cases that require whole-genome sequencing,” Press said.

Hovering on a screen behind Press at the Reno news conference was the face of a 30-something woman. More precisely, it was a digital 3D facial reconstruction based on forensics, dental records and DNA.

It was the face of woman known, since July 1982, as Sheep’s Flat Jane Doe. She’d been murdered and left near a popular hiking trail off the Mount Rose Highway, near a scenic meadow known by locals as the Sheep’s Flat.

With no suspects and no leads, the case languished for decades. In February 2018, members of the forensic science division of the Washoe County Sheriff’s Office attended a lecture by Fitzpatrick. Hopeful that forensic geneology could help them solve their cold case, they contacted the DNA Doe Project.

Sheep’s Flat Jane Doe’s DNA profile was uploaded at GEDMatch, an online database that differs from testing companies like Ancestry.com and 23andMe. Rather, GEDMatch is a place in which those profiles can be compared. “Like a DNA swap meet,” Press said, “where you have all these tables of families and you’re basically asking one another, ‘I’m trying to find a match for my silver set, do you have any spoons with this pattern?’ ”

The answer, in the case of Sheep’s Flat Jane Doe, was yes. Within hours, Press and her small army of volunteer sleuths had found a close match, a profile with enough DNA markers to be considered a first cousin, once removed. Eventually, they found another match, then two more matches connected to a different family tree.

The case had been unsolved for 37 years. It took DNA Doe project, working closely with Detective Kathleen Bishop of the Washoe County Sheriff’s Office, three days to come up with the name of the victim, Mary Edith Silvani, the daughter of Blanche and John Silvani, from Detroit. After nearly four decades, the Sheep’s Flat Jane Doe had an identity.