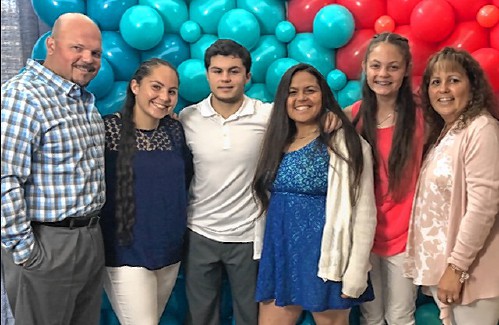 No matter the season, there’s a Rivera competing for Bishop Brady.

In the spring, there’s Freddy Rivera coaching his daughters Ami, a sophomore, and Isabella, a freshman, on Brady’s softball team. In the fall, it’s Ismael Rivera, a junior, on the football team. In the winter, all four of them are involved in the Giants’ basketball program. And these three Rivera children followed in the footsteps of their older sister, Lily, who was a four-year varsity softball and basketball player before graduating from Brady in 2017.

“They’re gym rats in all sense of the words,” said Annie Alosa, Bishop Brady’s Athletic Director and girls’ basketball coach. “They’re humble and hardworking, and that’s applause to their parents and their upbringing.”

While Freddy has been coaching all of his kids in multiple sports since they were little, their mother, Lydia, has focused more on keeping their academic pursuits in order. But she appreciates the positive impact sports has had on her children.

That’s because most days the Rivera family is knee deep in multiple seasons. Ismael plays football, basketball and baseball for the Giants. Ami and Isabella both play basketball and softball, and during the fall they’re practicing or playing AAU for one of those two sports. And Freddy is the head coach for softball, the JV boys’ basketball coach and a football bench coach.

“We calculated it one time and I think we get two weeks off a year,” Lydia said.

Lily is now a sophomore at Gordon College and was named to the All-Commonwealth Coast Conference Second Team this year after leading Gordon in batting average (.402) and setting a school record for doubles (13), a total which also led the conference. Lily may have been busy at the Wenham, Mass., college, but she has no problem following Brady athletics from a distance, not with a house full of inside sources eager to give her details.

“I’m so proud to see them do so well and having fun and doing it together, it’s just great to see,” Lily said. “They call me after games and they tell me how well they did, it’s great.”

Freddy used to take Lily to his men’s league softball games when she was just a little girl and, “she would be on the sidelines, hanging out with dad, playing catch whenever she could and just waiting until she could play,” Freddy said. When it was time for her to play, Lily had her own small Rivera watching from the sidelines.

“I used to follow Lily everywhere. I was her shadow,” said Ami, who was a First Team Division II girls’ basketball pick this winter. “But I learned everything from Lily because I followed her around everywhere.”

And big sister didn’t mind at all.

“My siblings would follow me all the way to practice and then they would be sitting off to the side just watching,” Lily said. “And after practice they would say, ‘Oh, Lily can you teach me this?’ or ‘How do you do that?’ So I would teach them what I just learned in practice and it was the best thing. I always had my three best friends with me doing what we loved together. There was nothing in the world that I loved more than that.”

Lily was also the trailblazer when it came to playing for dad.

“Lily was the one who went through everything first,” Freddy said. “It took me a few years to learn, but I had to learn how to separate being a dad from being a coach. And when we’re at any kind of game, softball, basketball, anything, they always call me coach and not dad. I don’t give them special treatment, if anything I ride them a little harder, but I also learned to step back a little in that area as well.”

His oldest daughter can confirm that.

“I loved having my dad as coach. He pushed me to be a better athlete. Sometimes I was like, ‘Why is he always so hard on me?’ and then it clicked in college that because he was so hard on me it pushed me to be a better player and it prepared me mentally and physically and I’m so much tougher now thanks to him,” Lily said. “There were times when we bickered back and forth, typical father-daughter arguments, but looking back now I wouldn’t change any of it and I would love to have him as a coach again some day.”

Like his older sister, Ismael was hungry to improve athletically, and his father was happy to support that extra effort.

“I was really bad at baseball at first, but I wanted to get better, and my dad wanted me to get better, so we would go to the gym at night and take like 1,000 swings and hit the small whiffle balls and everything,” said Ismael, who has started for the Brady baseball team since his freshman year. “And the game after doing all that practice for the first time, I hit my first triple, so it was worth it. And ever since then I’ve been putting in the work for every sport.”

While the three older Rivera kids took to the hardwood or diamond right away, that wasn’t the case with Isabella.

“When I was younger, I wanted to be a cheerleader, so I didn’t pay much attention to them playing sports. But when I started playing I realized how much I enjoyed it,” said Isabella, who is the Giants starting softball shortstop as a freshman and played varsity basketball this winter.

Ismael also had some questions about how he fit in with his siblings, but those questions have been answered.

“I wasn’t really happy that I didn’t have a brother, but my three sisters are all competitive, they always challenge me,” Ismael said. “We’ll play basketball, one-on-one, or go outside and play whiffle ball all the time.”

Those games can get feisty, and same goes for board games on family game night. But in the end, all the Riveras are on the same team.

“We have six people in this family and every single one of us is competitive, including mom,” Freddy said. “But at the same time, all six of us support each other in whatever we do. My son goes to the girls’ games, the girls go to my son’s games, so even though we compete, everybody is always supporting each other.”

(Tim O’Sullivan can be reached at 369-3341 or tosullivan@cmonitor.com or on Twitter @timosullivan20)