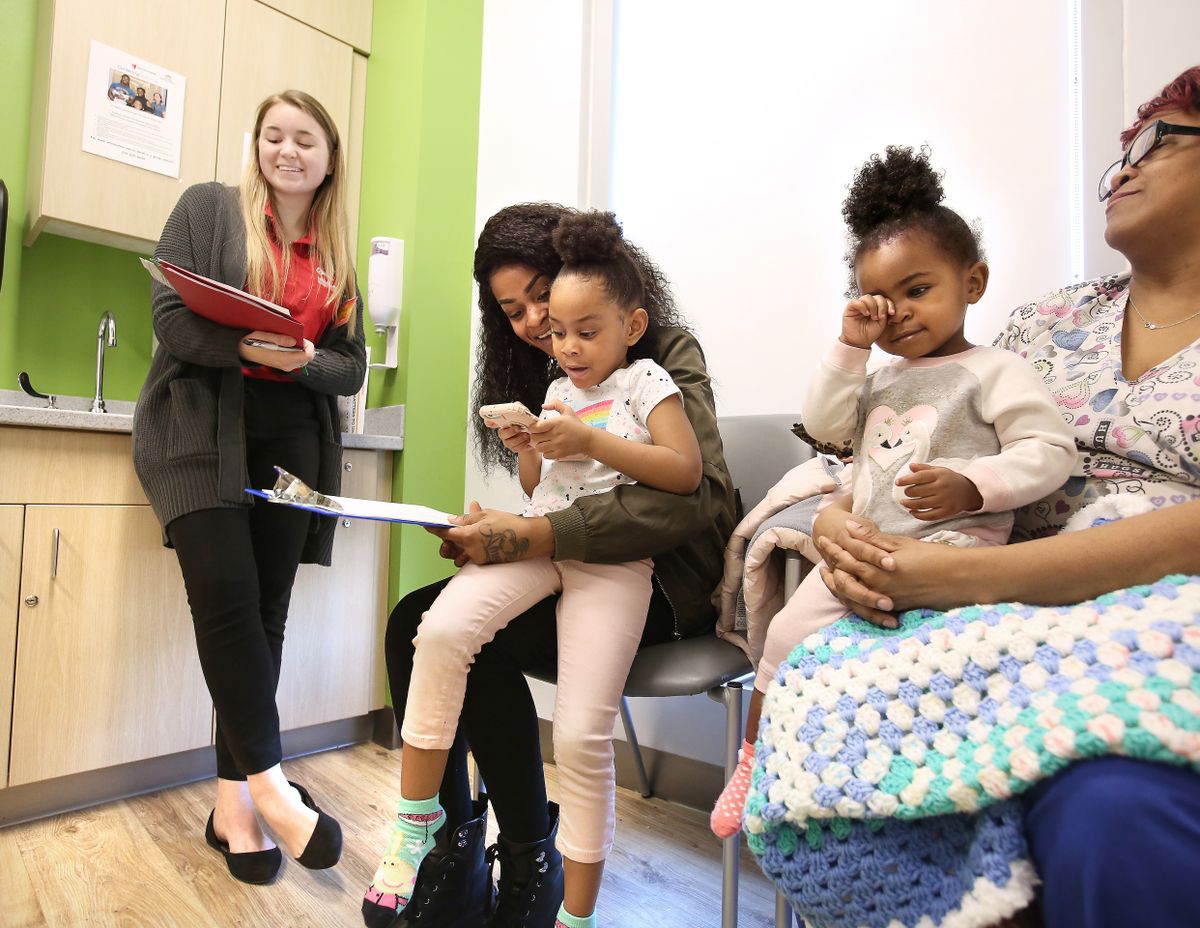 CLEVELAND, Ohio — Aliyah Henderson brought her daughters to University Hospitals Rainbow Center for Women and Children on Euclid Ave. for a checkup in March, and left the clinic with two big, non-medical, worries off her mind: how to afford the furniture she’d need after an upcoming move, and how to pay for the diapers she never seems to have enough of.

That’s because in addition to the routine heart, lung and temperature checks of a well-child visit, Henderson also received a visit from a student volunteer with the health center’s Rainbow Connects team. The program works to identify and help meet families’ basic social needs — things like food, clothing, diapers, utilities and furniture — to help them stay healthy.

Rainbow Connects is a reboot of Health Leads, a two-year pilot initiative launched at the hospital system in 2016, which served two small patient groups to see if helping with basic necessities would impact their health and wellbeing. The program is now primarily serving families at well-child pediatric visits and participants in the hospital system’s CenteringPregnancy group prenatal care visits.

Health Leads was designed in Boston in 1996 and has been used in 19 health systems across the country. In a 2016 study in JAMA Pediatrics, caregivers of children at two hospitals in San Francisco who received a social needs assessment and in-person intervention reported a significant decrease in needs and significant improvement of the child’s overall health after four months compared to a control group that only received written information on community resources.

The UH Health Leads pilot reached more than 3,000 families and helped connect about 20 percent with needed resources. It was successful enough to warrant making it a permanent service, says the UH Center’s Director, Jordan Javier. With the help of a $1 million grant from Key Bank last year, Rainbow Connects is funded for four years. The grant covers the cost of two full-time employees as well as administrative and technical costs of running the program; about 20 student-volunteers deliver the bulk of the in-person interventions during appointments.

Eventually, the hospital system hopes to gather enough data on the long-term health impacts of the program to be able to make a strong case for more sustainable funding models, such as having Medicaid reimburse for the service.

“It’s great we have funding but how do we sustain this going forward?” says Javier. “We hope that with these upstream initiatives that we’re doing to help families address some of the major health disparities that we have and perhaps bend the cost-curve downstream.”

Needs many, similar among patients

At Henderson’s visit in March, volunteer Meghan Beard walked the young mother through a quick questionnaire (usually delivered via iPad, but on this day with paper and pencil due to technical issues) about her needs.

“In the last year did you ever worry that you’d run out of food stamps or not have enough money for food?” asked Beard, 22, a graduate student in medical physiology at Case Western Reserve University, who plans on becoming a doctor.

Beard continues down her list, and Henderson tells her she also needs help with baby clothes, furniture and diapers.

“Everybody needs diapers,” she tells Beard, holding her 3-year-old daughter, Amor Wilson, on her lap. Next to her, grandmother Lei Branic entertains Henderson’s younger daughter, 1-year-old Mila Chatman, with a game of peekaboo using a donated hand-knit blanket.

The Supplemental Nutrition Assistance Program (SNAP), also known as food stamps, can’t be used to pay for baby items such as diapers, which can cost a family $75 to $100 a month. And the area’s only official diaper bank, the non-profit Cuyahoga County Diaper Bank, shut its doors in 2016, leaving only a few nonprofits that offer diapers on a limited basis.

“Baby supplies are a huge need, I cannot overstate that,” says Genevieve Birkby, Rainbow Connects program director. “That’s everything from diapers to car seats, to baby clothing to cribs and safe sleep spaces.”

In addition to baby supplies, the most frequently reported needs for families are food, furniture, clothing and assistance with utilities, Birkby says. Of the 867 caregivers Rainbow Connects has screened since October of 2018, 78 percent reported at least one need, and on average there were four or more needs among those who said they needed help.

Javier and Birkby say one of the biggest obstacles to helping people like Henderson access the resources they need is the ever-changing landscape of community providers. Health Leads has found that in a typical year, 40 percent of community resources change their contact information or offerings and another 20 percent are new to the landscape.

The other main problem is when there are no available resources to fill a need, what is available is too far away from a patient’s home or bus route to be accessible or is simply too difficult to use.

For example, the Percentage of Income Payment Plan (PIPP), a statewide program that helps low-income families manage their energy bills, is “not set up to be easy for people all the time,” Birkby says. Much of the work of Rainbow Connects continues to be helping people reach the right places and ensuring they get what they need.

About 30 percent of people with identified needs are successfully accessing provided resources through Rainbow Connects, an increase from the 18 percent connection rate for Health Leads, Birkby says. The group hopes to drive this figure even higher with more in-person follow-ups at appointments, she says.

“It’s a chance to reengage them about their needs and remind them of what is available,” she says. “That is often the best strategy.”

The second time was the charm for Henderson, who says she remembers a volunteer talking to her about things like food and utilities when she was in for an earlier appointment, but she didn’t pay close attention to the details.

She’s glad she did this time.

“I could really use the help,” she says.