What questions were asked in the 1950 census? In this live video Premiere I’ll explain what was asked, and how the answers given can help provide clues for additional research about your family. You’ll also learn what was not asked and which questions were asked for the first time in 1950. Then we’ll wrap up with my Genealogy Pro Tip for the 1950 Census.

Live Premiere Date: Thursday, April 22, 2021
Time: 11:00 am CENTRAL
Place: The Genealogy Gems YouTube Channel where you can participate in the Live Chat. You can also watch using the video player below:

We’re all looking forward to the 1950 census coming out in April 2022, followed soon after by the searchable index. But before we dig into it, it’s helpful to know what kinds of questions were asked and what kind of information you can expect to find about you, your parents, your grandparents or even your great grandparents.

If you haven’t watched it already, check out Elevenses with Lisa episode 51 for an overview of the 1950 census.

And I’ll have that video link for you again at the end of this video. And of course the best way to find your own genealogy gems is to follow my genealogy gems channel, so click the YouTube Subscribe button and that will toss me and this channel into your favorites list on YouTube for safe keeping and happy viewing for years to come.

The U.S. Federal Census is taken every 10 years here in the United States. Typically in genealogy we see more and more questions being asked each decade, which is awesome for us as family historians. But did you know that the 1950 population questionnaire actually asked FEWER questions than its predecessor in 1940.

Yep, according to the U.S. Census bureau, in 1940 every household was asked 34 questions. However, in 1950 they were asked just 20 questions. As we go through the questions I’ll let you know what’s the same, what unfortunately you will NOT being seeing, BUT also the few NEW questions that were asked.

The following questions were asked of everyone in the household.

1. Name of street, avenue or road where the household is located

5. If no, is this house on a place of three or more acres? (New question for 1950 thanks to the expansion of suburbia.)

Census takers were instructed to assume that all members of the related household were the same race. For unrelated people they were to ask. And if you see a description you are unfamiliar with, consult the 1950 census enumerator instructions.)

11. How old was this person on his last birthday?

It was expected that there would be some folks who either didn’t know their exact age or didn’t care to share it. Census takers were instructed to try to zero in and get as accurate as possible. If age wasn’t known, they were instructed to enter an estimate as the very last resort, and footnote that it was an estimate.

Marriage codes found in this column:
MAR = married
WD = widowed
D = divorced
SEP = separated
NEV = never married. People under the age of 14 were automatically labeled as never married. Also, common-law marriages were reported as Married, so while marital status can be an indicator to look for marriage records, it is possible that there may not be any.

13. What State or country was the person born in?

It’s important to note that if the baby was born in a hospital across the state line, they were reported as being born in the state where the family lived. This is important to keep in mind when hunting for birth certificates.

14. If foreign born, is the person naturalized?

This will be a yes or no. But if you see “AP” it means the person was born of American parents abroad or at sea. Also, if born at sea they were an American citizen if their father was, or if they were born after 5/24/1934 and either parent was American.

Before we get to the last six questions which were asked only of people 14 years of age and older, let’s take a look at the questions you might have expected to see that were asked in the previous 1940 census but were not.

You may be wondering why the last 6 questions of the 1950 census were only asked of people over the age of 14. It’s because these questions were about employment status. Not surprisingly, these questions vary a bit from what was asked about in employment in 1940, but they are pretty similar.

16. If the person was “keeping house” or “something else” in question 15, did the person do any work at all last week, not counting work around the house? (Including work-for-pay, in his own business, working on a farm or unpaid family work)

18. If the person answered “no” to question 17, even if he didn’t work last week, does he have a job or business?

19. If the person was working, how many hours did he or she work in the last week?

20. What kind of work does the person do?

Here’s an example of an entry you might see for someone’s employment: Jewelry, Salesman, P. Armed forces was used for all types of military service.

The one glaring omission in 1950 is questions about whether the person worked for one of the government program  such as the Works Progress Administration known as the WPA or The Civilian Conversation Corp known as the CCC. This actually makes sense because these employment programs were focused on helping the unemployed during the Depression. WWII had most Americans working and doing their part in some fashion creating low unemployment. Therefore, the WPA was ended in 1943.

Let’s quickly recap what you will learn from the answers to the questions asked during the 1950 census that can help you learn more about your family history:

You’ll see the names of your relatives and ancestors, where they lived and the relationships within the family.

You’ll find out where they were living and get the actual address. You can then use this information to find old maps, search city directories and learn much more about their neighborhood and their lives.

You’re also going to learn your relative’s age which will get you even closer to determining their birthdate. This in turn will help you locate their birth records. You will also learn the state or country where they were born.

Episode 31: Immigration and Naturalization Records for Family History, Part 3.
Stephen Danko talks in-depth about passenger list annotations and the immigrant’s experience at Ellis Island. You didn’t know what you were missing with those mysterious scribbles on 20th-century passenger manifests!

And finally, you’ll not only find out if they were married and if they had any previous marriages.

The answer is, maybe.

Pro Tip: Keep an eye out for additional questions.

As in 1940, 5 percent of the population were asked an additional slate of questions. This was to provide sample data about the population. One of those questions asked was “If female and ever married, how many children has she ever borne, not counting stillbirths?”

Here are the additional questions that were asked of just 5% of the population in the 1950 U.S. Federal Census. (Note: They were asked of all ages.)

21. Was the person living in the same house a year ago? If the answer was no, then…

23. If no to question 21, was the person living in the same county a year ago?

25. What country were the person’s mother and father born in?

26. What is the highest grade of school that the person has attended?

27. Did the person finish this grade?

28. Has the person attended school since February 1st?

For members of the household who were 14 years and older, they also answered these questions centered around employment details, money, military service previous marriages and the question Suzanne is hoping to have answered – children born to women in the household. 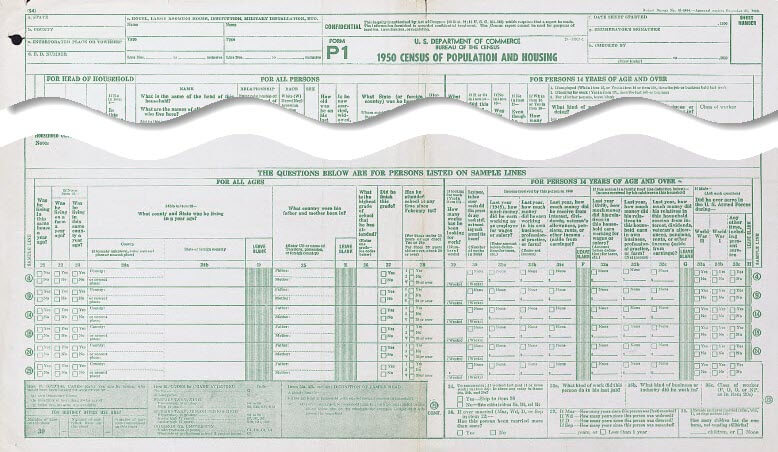 1950 census supplemental questions asked of 5% of the population.

30. Last year, how many weeks did this person not work at all, not counting work around the house?

31. Last year, how much money did the person earn working as an employee for wages or salary?

32. Last year, how much money did the person earn working at his own business, professional occupation, or farm?

33. Last year, how much money did the person receive from interest, dividends, veteran’s allowances, pensions, rents, or other income (aside from earnings)?

34. If this person is the head of the household: last year, how much money did his relatives in this household earn working for wages or salary?

35. If this person is the head of the household: last year, how much money did the person earn working at his own business, professional occupation, or farm?

36. If this person is the head of the household: last year, how much money did the person receive from interest, dividends, veteran’s allowances, pensions, rents, or other income (aside from earnings)?

40. If ever married, has this person been married before?

41. If married, widowed, divorced, or separated, how many years since this event occurred?

42. If female and ever married, how many children has she ever borne, not counting stillbirths?

So now you know all the details on what you can look forward to learning about in the 1950 census. If you would like to learn more about the 1950 census, watch The 1950 Census for Genealogy. You can watch the video and get the complete show notes here.

Watch episode 51 and get the show notes here.

Elevenses with Lisa is a genealogy community, and discussion is a big part of the experience. In the Comments below please share on one of these topics: