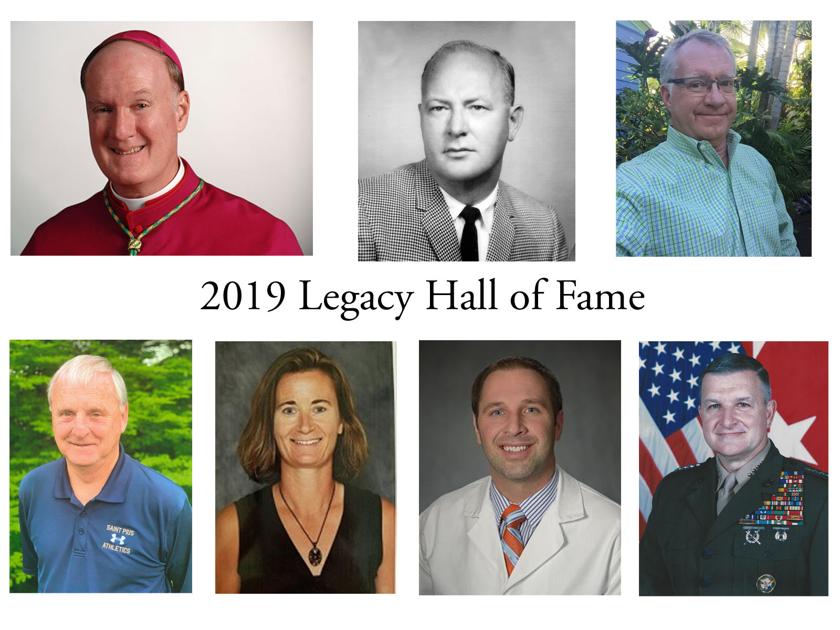 UPPER PROVIDENCE — With seven new inductees, Pope John Paul II High School Legacy of Impact Hall of Fame will get a little more crowded on May 18.

On that night, beginning at 6:30 p.m. at the school, alumni representing the Legacy Schools that make up the branches of Pope John Paul’s family tree — St. Patrick, St. Matthew, Bishop Kenrick, Archbishop Kennedy, Kennedy-Kenrick and St. Pius X — will be recognized for their common bond of serving as role models for their modern counterparts at Pope John Paul II High School.

The inaugural Hall of Fame was held in 2017, noted Mike Duffy, a 1969 Bishop Kenrick grad and now director of alumni relations at Pope John Paul.

“The first Hall of Fame went really well. Nothing was scripted. We didn’t tell the ones accepting (the awards) what to say. They were remembering the teachers they had in their speeches and that’s what made it so spontaneous and memorable,” Duffy said.

According to the school’s website, www.pjphs.org, eligibility criteria for consideration of a nominee extends to alumni who have been a role model for current alumni by distinguishing  themselves with great leadership at the local, state, national, and/or international level through their chosen careers or vocations, or who have made distinguished contributions to society through their work or donation of time.

Although many inductees have highlighted their academic years with sports, the Legacy of Impact Hall of Fame is not sports-oriented, Duffy assured.

“It’s a Legacy Hall of Fame, not a Sports Hall of Fame,” he said. “Though a lot of inductees have done well in sports, we tried to make it more about their education and how they were able to use that to become successful in their careers and also give back. The thing about a Catholic education is paying it forward and I think that’s where some of these people really stand out. Sports can be part of it, but it’s not about you excelling at sports. Sports is not a criteria.”

A selection committee made up of a cross section of evaluators – parents, former teachers, students – narrowed nearly 20 nominees down to seven, Duffy explained.

“They ranked the nominees in order of who is most deserving. We want the Hall to be about the students of today recognizing what the people who went before them accomplished. If they can realize that ‘so-and-so was a graduate of Bishop Kenrick, and my grandfather went to Bishop Kenrick,’  it kind of gets that connection going.

Rev. Michael J. Fitzgerald, Bishop Kenrick Class of 1966, served as Judge on the Metropolitan Tribunal for nearly six years, and was named Chaplain to His Holiness with the title Monsignor in 2003. Ordained into the priesthood in 1980, Fitzgerald has many years of educational and theological experience in the Catholic Church

Charles (Jerry) Kehoe, St. Patrick’s Class of 1949, gained renown for his athletic achievements, ranging from varsity sports during his junior and senior years, and first team all-suburban Catholic league in basketball and football in his junior and senior years. His football highlights include an 87-yard punt return for a touchdown against Malvern Preparatory, as well as throwing three touchdown passes in one game as quarterback. Kehoe was also a beloved coach at Bishop Kenrick High School, first serving as assistant football and basketball coach to Joe Brown. On Brown’s retirement, Kehoe was the head varsity basketball coach.

Thomas J. Pilecki, Archbishop Kennedy Class of 1969, best known for honing his theatrical talents while at Archbishop Kennedy and ultimately building a successful career from the opportunities he was given while at this Legacy school. His interest in drama, music, chorus and orchestra led him on a professional path to becoming a best-selling author, educational consultant, artistic and executive director, program creator, founder and principal of St. Augustine’s School of the Arts/Augustine Fine Arts, Inc.  and creating award-winning documentary films.

Gen. Anthony Zinni, St. Matthew High School, Class of 1961,  former U.S.  Marine Corps general and a former commander-in-chief of the U.S. Central command (CENTCOM). After earning his degree in economics, Zinni was commissioned as a second lieutenant in the U.S.  Marine Corps. He was later assigned to the second Marine division, where he served as a platoon commander, company executive officer, and company commander. He was later selected to be a special envoy for the United States to Israel and the Palestinian authority in 2002. Fifteen years later, Zinni traveled to the Persian Gulf, after a request by U.S. Secretary of State Rex Tillerson to help mediate the 2017-18 QATAR diplomatic crisis.

David A. Psota, St. Pius X Class of 1963, whose name has been synonymous with St. Pius X from early September, 1959, until the building closed in June, 2010. Arriving as a student and ending as Alumni Director, wearing many “hats” in between, “Mr. P” (as he was known to the students) was seen by many as the epitome of Pius Pride. As a member of the social studies department, Dave was an inspiration to students who, when asked to describe him, used words such as “dedicated”, “honest”, and “caring.”  Psota served as golf coach, assistant football coach, and activities director, when Pius Basketball won their State Title. As Alumni Director, he was instrumental in organizing and mobilizing the Pius alums into an integral part of the Pius Community.

A varsity letter winner in tennis, softball and basketball for all of her four years at Saint Pius X, Maria Rapchinski, Class of 1992, somehow also found time to serve on the Legacy school’s student council, earning her BS and Masters degrees while coaching tennis and volunteering in the athletic department while in graduate school, and also teaching underprivileged school districts in the Bronx, NY. Rapchinski has been a middle school teacher and high school coach at Governor Mifflin for 20 years, coaching roughly 20 teams in the CYO and YMCA.

Dr. Ryan D. Reber, St. Pius X Class of 2001, who was involved in both academia and athletics during his time at St. Pius, receiving seven varsity letters over his four years, earning four in golf and three in basketball. Reber graduated Summa Cum Laud with a degree in Biology from Rider University, earning the prestigious Andrew J Rider Scholar Award for highest grade point average in the School of Liberal Arts and Sciences. He was also awarded the NCAA Student Athlete Award for excellence in academics and athletics, later attending medical school at Philadelphia College of Osteopathic Medicine, graduating valedictorian of his class in 2009.

Duffy credited Pope John Paul president Jason Bozzone for elevating the significance of the Legacy schools for a modern, if warmly nostalgic, context and for aggressively engaging with the alumni from each school.

To that end, a gathering of Bishop Kenrick alumni was held at the school in January.

“We’re doing this in segments because each school has its own culture and its own traditions,” Bozzone had noted. “By doing each one of these segmented events then we want to bring them all together as one school. We can impact today and forever if we all come together as one Catholic entity. This is my third year as president and from my first year it was really important for me to understand our legacy alumni. I understood right away how John Paul was built and how the merger of Bishop Kenrick and Archbishop Kennedy, with St. Pius X, all came into one. It was important for me to understand that culture because it’s very important to celebrate the past and the future for us to be successful at Pope John Paul. It’s so important for us to bring our Kenrick folks back because Kenrick is really the foundation of who we are. The most important thing we do is to provide a high quality Catholic education,” he added, “but a lot of things we do stem from our Legacy schools like Kenrick.”

Duffy, who’s been on the job here for three years, about as long as Bozzone, noted that Pope John Paul is now recognizing its Legacy schools in a variety of ways.

“We give the incoming freshmen a Legacy pin with an oak tree symbolizing the different schools that came together as one school. And at graduation we have all the flags from our Legacy schools there on stage, with the Pope John Paul flag in the center. We’ve come a long way in a short amount of time. The school went for almost seven years without recognizing its legacy. It’s not going to happen overnight,” he added, ” but the alumni of all our Legacy schools have been gradually coming around.”

Tickets for the Legacy of Impact Hall of Fame are available at the www.pjphs.org