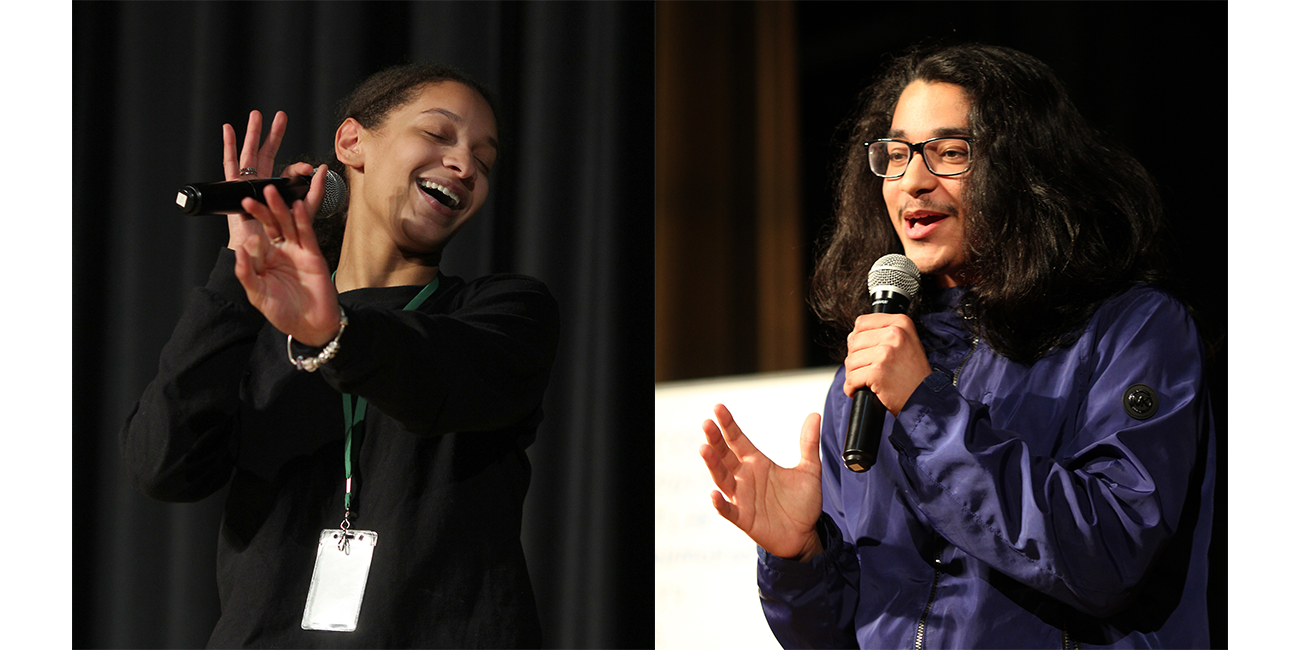 LYNN — There’s a method to what seems to be the madness at Story Slam.

Monday’s contest at Lynn Classical gave 11 students a chance to talk, in a three-minute presentation, about different events in their lives. All of them did their best to be entertaining, and they all succeeded.

But everyone associated with the event agreed that if you want to get a good idea of what kids think about, and worry about, let them put it into a short Story Slam vignette.

“Some of them can be pretty poignant,” said Tony Toledo, one of the storytellers present Monday to help move the event along.

In its eighth year, the slam serves multiple purposes. Aside from being an excellent teaching tool, it affords seniors at Classical one period of light-hearted entertainment. However, the lessons come in unexpected ways.

For example, three consecutive speakers recounted their misadventures with police and crime-solving apparatus.

Rigoberto Espana talked about the day three years ago that he and his friends decided to sneak a few goods out of Walmart — and got caught.

Espana, demonstrating how his hand was shaking as he was being questioned by police, concluded his talk with the admonition, “the moral of the story: don’t steal from Walmart with your friends.”

Immediately after Espana, Joshua Guerrero was up talking about the time he accidentally locked a pair of handcuffs to his wrists, and nobody had the key.

He finally had to have them taken off by a police officer.

“It was the first time I was ever handcuffed,” he said. “And I am never going to be handcuffed again.”

And Jeffrey Fuentes talked about the time he and his friends were skimming rocks along a neighbor’s swimming pool when his stone skimmed a little too much and broke a window. It turned out that a police officer owned the house, and the man gave chase for a while before giving up.

“It was the first time, and the only time, I’ve been chased by the cops.”

Students performing were asked to stick to one of seven themes: where I am from, epic fail, the first time, lost and found, risky business, rite of passage, says who, and up the family tree.

Frey said that part of the English curriculum at Classical is teaching speaking and listening skills. Stories Live is a program that the school has brought into the classroom “that has created a curriculum to teach kids how to speak in public and how to listen,” she said. “It is a motivational program.”

The curriculum is a required course, and every student has to deliver a slam in the course of the semester.

“Some of those stories are heart-wrenching,” said Toledo, “particularly when you consider that these kids don’t all know each other that well. They have to dig deep and tell people around themselves.”

Some of the stories were downright funny. Angel Acosta, the first speaker, riffed on getting ketchup on his pants just as he was about to take a date to the movies. He made the situation worse by trying to rub it off with water and a paper towel.

When the date was over, the girl told him, “I had a good time, but I noticed you got a stain on your pants. I wasn’t going to say anything, but it was awkward.”

The result?
“I never got a text back from her,” Acosta said. “Who cares?”

Andrew Flarety talked about accompanying his father to work one day at a construction site when he was 8 years old. It was a day full of misadventures, including when his dad — who had narcolepsy — fell asleep near a power saw, then woke with a start when someone turned it on.

At the end of the day, the young Flarety wanted to know why he didn’t get paid.

Some of the stories focused on personal issues, such as Skyler Crayton’s dilemma while tubing, Anthony Toro’s problems with his bathing suit while he was frolicking at the beach, and Jonathan Ventura’s rant on the condition of the school’s restrooms.

Speakers were judged on several criteria, and award winners will be announced at a later date. Lynn Tech still has to have its contest. The Tech students were supposed to speak with the Classical kids, but ran into logistical difficulties.