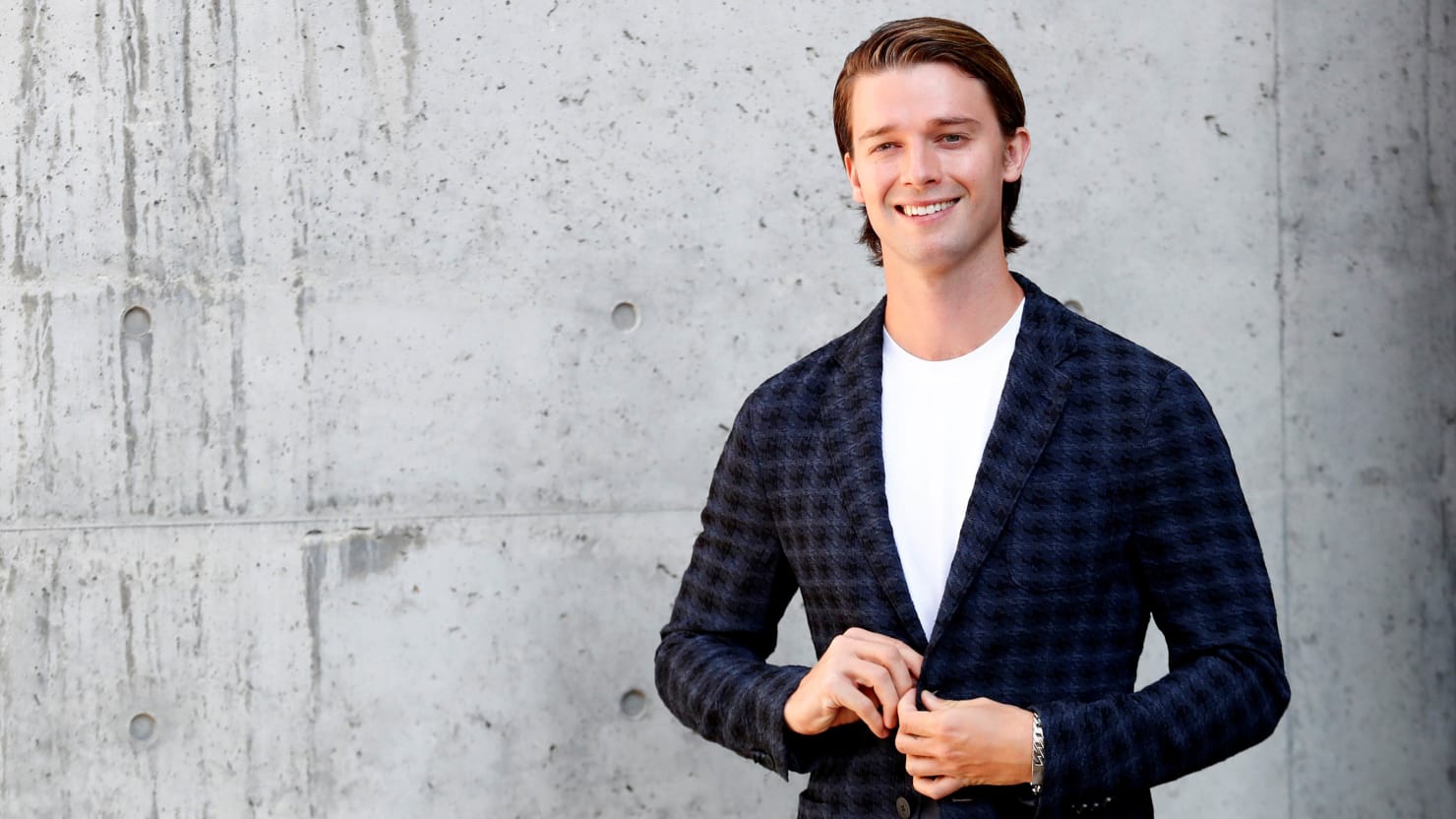 AUSTIN, Texas—Patrick Schwarzenegger wants you to know that he’s a very normal person. Well, “normal-ish.” Despite Schwarzenegger’s best efforts, he exudes a “that guy is probably famous” glow, drinking fresh orange juice in a hotel restaurant and actually pulling off a wide brim hat (many at SXSW have tried, and almost all have failed). Schwarzenegger is in Austin to promote his new film, Daniel Isn’t Real—and to watch it. “I literally haven’t seen anything,” Schwarzenegger laughs. Also on the agenda is hanging out with his mom, journalist and author Maria Shriver, who spoke at the festival; they’re planning on getting barbecue in the very near future.

Daniel Isn’t Real is a bit of a departure for Schwarzenegger. In the film, he plays the “imaginary” best friend who’s been terrorizing protagonist Luke (Miles Robbins) since he was a child. Luke eventually leaves for college, where he finds that Daniel has grown up too. At first, Daniel is the ideal mentor, encouraging Luke to talk to new people and get out of his comfort zone. But the situation quickly grows sinister, as we come to understand that Daniel is, perhaps literally, the devil on Luke’s shoulder. His advice starts to cross the line from flirting tips to naked sexual aggression; when Luke puts his foot down, Daniel tries to take over his body. While Luke seeks out a diagnosis for the voice in his head, viewers are left to wonder if the swaggering, casually cruel Daniel is actually Luke’s alter-ego, or perhaps his truest self.

Schwarzenegger describes Daniel as “the complete opposite of who I am.” But as a young actor who learned to navigate the spotlight years before his first day on set, he knows what it’s like “to have other voices in your head.”

“That’s the thing with fame,” Schwarzenegger, who is the son of two very famous people, continues, having already admitted that that word makes him cringe. “There are so many people telling you what to do, or like the yes men around you saying keep doing this or do that, or this is how you should act because you’ll be perceived better…I don’t know. Like, I just want to be who I am and if it works, cool, and if not, I’m still happy.”

That isn’t strictly hypothetical—Schwarzenegger knows that he can find work outside of the entertainment industry, because he already has. The 25-year-old is a slightly unconventional multi-hyphenate whose resume ranges from acting and modeling to investing in a fast-casual pizza chain. “I have about thirteen businesses under my mother company,” he explains. “I started that in high school.” Perhaps unsurprisingly, Patrick Schwarzenegger doesn’t like when people ask him what he does for a living.

“I hate that question! I always say I’m an actor, I’m doing film work, I am a business owner and an entrepreneur and…” he trails off, before exclaiming, “There are so many things that I want to do with my life! But so many people kind of scoff at that, they’re like OK, it sounds like you don’t really know what you’re doing, you’re a little bit all over the place, Patrick. And I’m always like, no, not really. I know what I want to do and those are the things that I’m doing. I love business, I love film, there’s a bunch of things that I love—and that’s kind of the American dream. The beauty of America is trying to do what you love to do.”

Schwarzenegger also points out that he’s adopted his dad’s template for success. The elder Schwarzenegger always encouraged him to follow his dreams, no matter how seemingly disparate. “He was like, that’s what I wanted to do—everyone said I was crazy that I wanted to be an actor and a politician and a bodybuilder, like the three polar opposites. But those are the three things that I wanted to focus on, so those are the three things that I did…And the same goes for me.” Arnold inspired his son at a young age; In 2018, Patrick told Parade that, “I grew up going to film sets, loving watching my dad act and doing film roles.”

Still, Schwarzenegger maintains that his parents “did a really good job of kind of keeping me out of the spotlight when I was growing up.” He continues, “My mom was in the spotlight growing up, with the Kennedys and them being in politics and everything. And my dad is the complete opposite, he grew up on a small farm in Austria with a population of a few hundred people, and he had a very different upbringing. So together they kind of balanced that out.”

“So many people kind of scoff at that, they’re like OK, it sounds like you don’t really know what you’re doing, you’re a little bit all over the place, Patrick.”

“I think that the one thing I would say is, I’ve had friends that have gone from nothing to becoming some of the most famous people in their industries, and they have a harder time understanding the idea of fame and coping with that. And I guess with a little bit of background with my family being in that, I feel more comfortable navigating through it.”

Acting is a natural fit for Schwarzenegger’s curiosity. It allows him to inhabit lives that are not easily accessible to your average scion. “I’m growing as a human and as Patrick and as a man and everything, and acting helps a lot with that,” Schwarzenegger contemplates. “Whether I’m in class or trying to put myself in someone else’s shoes for roles, just getting to learn what that character goes through. It helps me learn each day about different people. Whether that’s a cowboy or something on a ranch in Texas or whether that’s a kid in LA.”

Schwarzenegger was specifically drawn to Daniel because the role felt like an opportunity to experiment and expand his range. “I had this film come out this last year called Midnight Sun. and that was more of the heartthrob teen thing—which was really fun! It came out in theaters and it was really awesome for me. But as far as stretching as an actor and getting to really mess with a role and let myself go and play…This was something that I really got to play with.”

The project also struck Schwarzenegger as a timely one, citing a global conversation “about men’s health and men’s mental health, and what is masculinity? What is it like to be a man, all these different things.” Daniel often comes across as a mouthpiece for toxic masculinity, whether he’s berating Luke for his perceived frailty or possessing his body to initiate a disturbing sex scene. “I found it pretty interesting that this kind of tapped in a little bit to that subject, and then at the same time dealt with mental health, schizophrenia, all that stuff,” Patrick explains. “It tapped into a teenager that was going through the hardships of having that kind of a voice in his head, and his relationship with it. And I know this movie obviously takes it to a different degree, but I think it’s something that’s a pretty prominent discussion in our society today. Everyone has some sort of voice in their head, whether it’s telling you to do something or not, or second-guessing yourself or questioning yourself, or if it’s that side of you that’s telling you to keep going, boosting your confidence.”

Like Luke, Patrick was bound to Daniel whether he liked it or not. “It was really with me for those few weeks that we were filming,” he recalls, “especially because I would wear the wardrobe out everywhere, and it was hilarious, like I’d be in the Starbucks line with my fishnet see-through things on, my see-through pants and glasses and chains and bleached eyebrows and black hair. And everyone in the Starbucks line is staring at me. But it’s an interesting thing to be like, OK, what does it feel like to be this kind of person? You know, putting yourself into someone else’s shoes.”

“But you know, there are actors that have gone way more method,” he’s quick to add. “I don’t want to say that I’m like, full method.”

On set, director Adam Egypt Mortimer encouraged Schwarzenegger to let go and improvise. “[The producers] had done a film with Nicolas Cage prior called Mandy, and they were like, Nic Cage would just come to set, do whatever the fuck he wanted on the screen, would bring 100 percent and would bring his own opinions of the role and everything like that. And that’s what we want you to do,” Schwarzenegger laughs. “The crew probably thought I was fucking odd and weird. I was screaming all the time and yelling and doing weird shit after scenes and messing with people. But it was fun, and it definitely wasn’t who I am…But that taps into the kind of movie it is as well.” He grins. “It’s like, everyone has another side of themselves.”