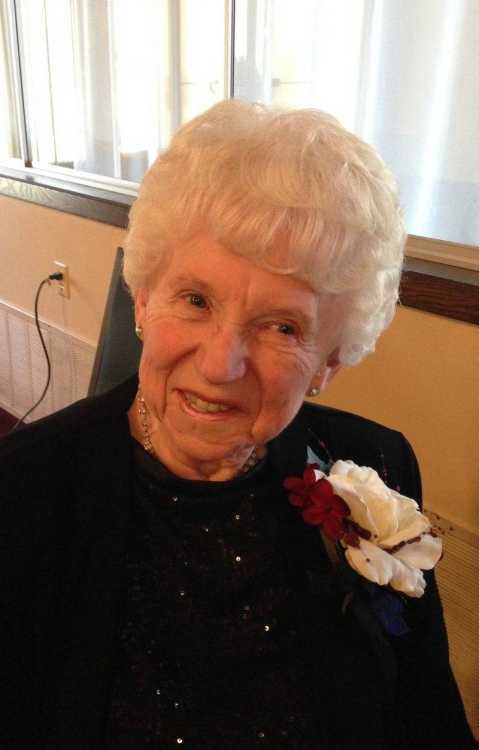 Isobel Ann (Kubal) Wilberding, beloved mother, grandmother, and great-grandmother, passed away on May 3, 2019 at the age of 87, due to complications from a hip injury following an unfortunate fall. A Mass of Christian Burial will be held at 10:30 a.m. Wednesday, May 8, 2019, at Immaculate Conception Catholic Church in Cherokee. Father Kenneth Seifried will officiate. Burial will take place at Maryhill Visitation Cemetery, rural Cherokee. Visitation will begin at 4:00 p.m. Tuesday, with the family present from 5:00-7:00 p.m. Tuesday night at the Greenwood-Schubert Funeral Home in Cherokee. A Catholic Daughters Rosary will take place at 4:00 p.m. Tuesday followed by a prayer service at 7:00 p.m. Tuesday night, following the visitation at the funeral home. Online condolences may be sent to the family at www.greenwoodfuneral.com.

Isobel Ann (Kubal) Wilberding, the daughter of James William and Isabella Maryana (Wallenberg), Kubal, was born on January 22, 1932 in Sioux City, Iowa. She was the eldest of three children.

Ann attended the Sioux City area schools and graduated from Heelan High School in 1950. As fate would have it, she met the love of her life, one Lawrence “Larry” Wilberding, shortly before her senior year of high school. Upon spying her walking down, the street, ith a bouquet of flowers in hand, Larry suggested they find the nearest church and tie the knot. Real love soon followed and the two were married on June 13, 1950. They immediately settled in rural Cherokee County, forming lifelong friendships among the wonderful people of Visitation Parish of Maryhill. Anns days were soon filled to capacity with farm life and the raising of their six children.

Ann was a firm believer in giving back to both church and community. Anne was a proud member of the Catholic Daughters of America. She served on the Maryhill Parish Council and its Guild. Anne was a part of Maryhill’s Decorating Committee, Funeral Committee, and Cemetery Board. She also taught Catechism to the youth of the church. Ann assisted in the archiving of church photos, a treasured part of its history, which today is found on display at Maryhill’s Museum. One of Anns favorite activities was the Birthday Club, a small group of Maryhill women who gathered monthly to celebrate one another’s birthdays and holidays. This tradition lasted for over 50 years. Ann and her husband Larry were also active in a couples card group made up of dear Maryhill friends.

In 1976, the Wilberdings left country life behind and settled in nearby Meriden, Iowa, where they lived and relished the small-town atmosphere for decades. Ann especially looked forward to the get-togethers of the Meriden Ladies Coffee Club having made some numerous cherished friends at their get-togethers. Ann put her keen fashion sense to work, taking a job in the bridal department of (the former) Hope’s Fashion Farm. She enjoyed the company of her co-workers until her retirement. Upon retirement, always up for learning something new, Ann studied the art of calligraphy.

In her free time, Ann served as President of the Cherokee County Historical Society, as well as managing its museum for many years. She was passionate in her love of genealogy and greatly enjoyed sharing that interest with others. Ann also served as the President of the Local 179 AFL-CIO in 1979 and 1980. Ann also became active in local politics, serving as the first female member of Meriden’s Town Council. Ann also served on the local hospital auxiliary board. For hobbies, she enjoyed ceramics, sewing, gardening, cooking, and hosting friends at her home.

Ann was preceded in death by her parents, her beloved husband Larry, and her sister Marjorie. She is survived by her brother and sister-in-law, John and Bernice Kubal of Brookings, South Dakota, as well as her six children: Al and (Kathy) Felix of Tucson, AZ ; (Dave) and Cindy Wilberding of Cherokee, IA; Bob and (Dianne) Aust of Sioux City, IA; Dan Wilberding of Marion, IN; Mike and (Merry Jo) Daniel of Marion, IN and Thane and (Laura) Van Zomeren of Harpers Ferry, WV.

Memorial contributions may be directed to the Cherokee Historical Preservation Committee.

The Wilberding Family especially wishes to thank Dr. Timothy Rice and the staff of Accura for the wonderful and compassionate care shown to their mother. She often remarked how grateful she was to have found such great care and a warm place to call home late in life.

” Well done oh good and faithful servant! You will be greatly missed, but never forgotten.”