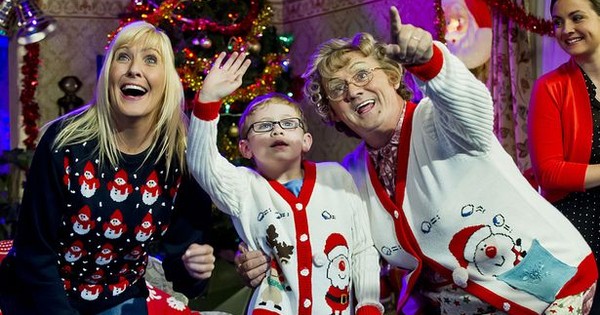 When casting the Brown family, Mrs Brown’s Boys creator Brendan O’Carroll didn’t need to look far. In fact, he didn’t have to look beyond his own living room.

The cast of the hit BBC comedy are mostly members of the comedy writer’s family, but how are they all related?

The titular mammy is the daddy of the family and father to Danny O’Carroll who plays Buster, and Fiona O’Carroll who plays Maria. His sister Eilish plays next door neighbour Winnie, his wife Jennifer plays daughter Cathy, and his real-life grandson, Jamie O’Carroll, plays Mrs Brown’s grandson, Bono.

His on screen daughter-in-law Betty (Amanda Woods) is his real life daughter-in-law (she’s married to Danny aka Buster), while TV son Trevor (Martin Delany) is actually his son-in-law (married to Fiona O’Carroll aka Maria), and his sister-in-law plays Winnie’s daughter, Sharon.

Next door neighbour Winnie may be Agnes’ best pal on screen but in real life she’s Brendan O’Carroll’s sister.

Plus Winnie’s daughter, Sharon, is her real-life sister.

Mrs Brown’s on screen daughter-in-law Maria is actually Brendan’s daughter, Fiona O’Carroll – or Fiona Delany to call her by her married name. That makes Jennifer Gibney (Cathy) her stepmum, Eilish O’Carroll (Winnie) her aunt and Buster (Danny O’Carroll) her brother.

Little Bono Brown is actually her nephew, Jamie, while her sister-in-law, Amanda Woods, is Betty Brown.

Mrs Brown’s youngest son is played by O’Carroll’s son-in-law, Martin Delany, who is married to Fiona O’Carroll – his on-screen sister-in-law.

The new Rory is played by Damien McKiernan, a friend of the family who took over the role from Rory Cowan in the 2017 Christmas special.