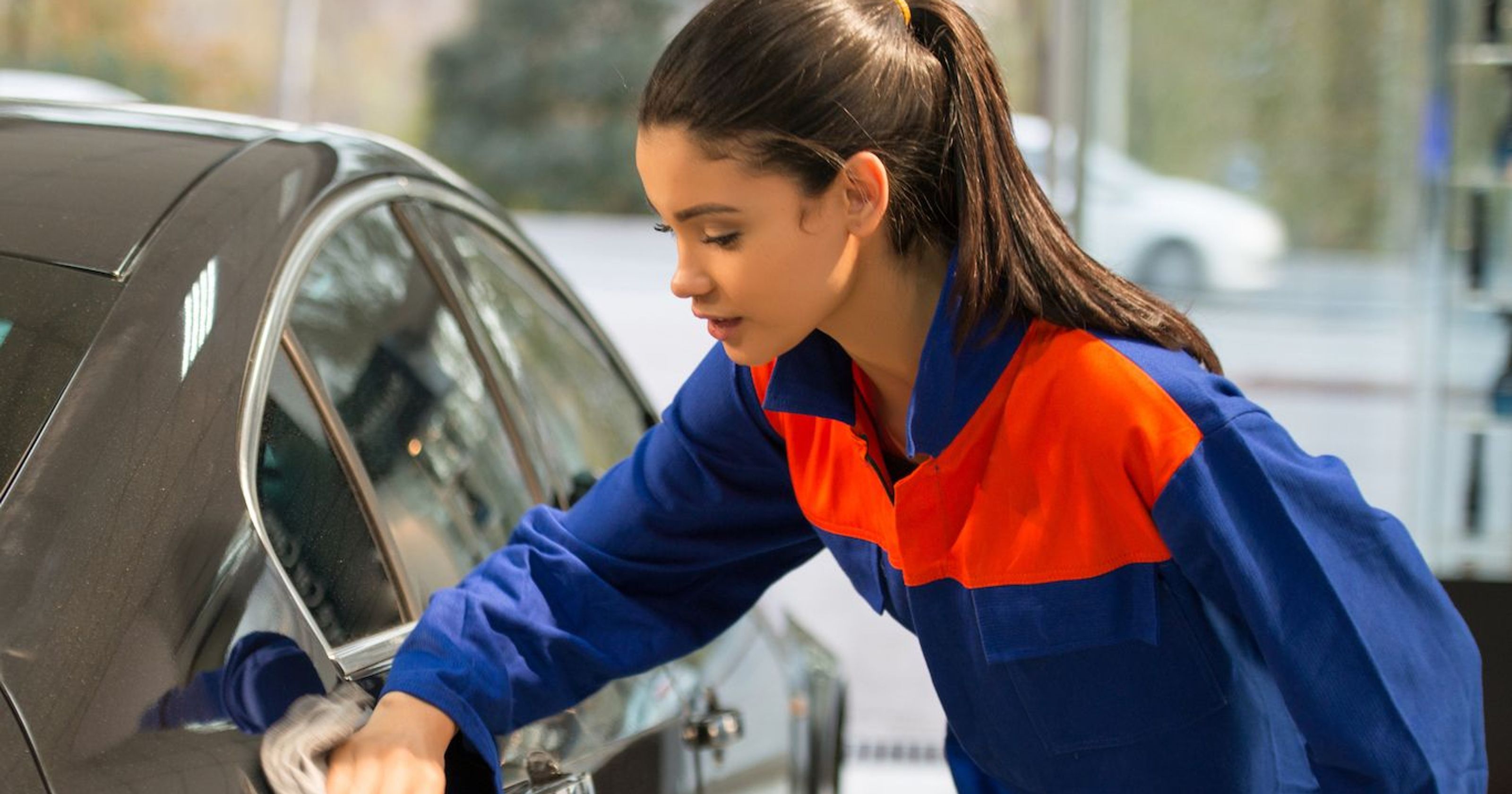 Wages in the United States have recently hit their highest rate of growth since the end of the Great Recession in 2009. The 3.1 percent increase from 2017 to 2018 is a good sign for the American economy.

But the effects are not being felt evenly. Millions of working Americans are earning less than $30,000 each year.

Typically, unskilled jobs – such as those in the food or customer service industries – do not pay well. Though these are often important jobs, workers can be easily replaced, whether by another unskilled worker or by automation. This drives down these jobs’ potential earnings.

Looking for a high-paying job?: Here are the top 25 in the US.

Middle-skill jobs are those that require skills and experience beyond a high school diploma – like a certification – but less than a bachelor’s degree. These jobs include those in transportation, food preparation, and packaging. “The divide between men and women in middle-skill jobs is due, in part, to conventional wisdom about occupations and gender roles,” according to IWPR.

Women are also likely to be paid less than their male counterparts in the same job. There is no job in the U.S. in which women’s median annual earnings exceed $100,000.

Some construction sites across the country look different these days: More women in hardhats are showing up, trained and toughened to do the gritty work in an industry that’s still dominated by men. (March 8)
AP

The 25 lowest paying jobs in the US

The category of miscellaneous agricultural workers includes workers who help farmers grow crops and tend to their livestock. The job requires physical labor and, often, heavy machinery operation. The job does not typically have any formal education requirements. Over the next decade, the number of workers in this occupation will not likely change very much from current levels.

Employment of bakers is projected to grow about 8% by 2026, roughly in line with the average American job. (Photo: Petar Chernaev / Getty Images)

Unlike many of the lowest paying jobs in America, bakers are often required to have some additional education beyond high school, such as an apprenticeship or culinary school education. Still, many bakers learn their trade through extensive on-the-job training over a long period, rather than in a classroom. Employment of bakers is projected to grow about 8 percent by 2026, roughly in line with the average American job.

Though all 50 states require that barbers and cosmetologists obtain a license to work in that state, the profession is one of the lowest paying in the country, with median annual earnings of $28,340. Hair care is a necessary service for most people, so as the population grows, so will employment in the field. Cosmetology employment is projected to grow 13 percent over the next decade, well ahead of the average job projected growth rate.

Vehicle and equipment cleaners are often employed by automotive care shops and car dealerships. The job, which has no educational requirements, is one of very few jobs in the United States in which the typical worker makes less than $28,000 per year.

Packaging and filling machine operators and tenders tend to work in factories that package food and other consumer goods. Typically, this occupation requires a high school diploma, if that, as a minimum level of education. This job can be labor intensive and may require overnight and overtime shifts.

Miscellaneous personal appearance workers, such as those who work in nail salons and other personal care services, typically make around $27,200 a year. (Photo: Foremniakowski / Getty Images)

Miscellaneous personal appearance workers, such as those who work in nail salons and other personal care services, typically make around $27,200 a year. Personal appearance work is considered a luxury and it relies on a strong economy in which Americans have enough disposable income to spend on these types of services. In 2014, the BLS projected this industry to have employment growth of 13.4 percent over the next decade, nearly double the 7.4 percent projected growth of the average American job.

Entertainment attendants and related workers are highly concentrated near Orlando, Florida, and the surrounding area – close to Disney World and Universal Studios Orlando. In addition to theme parks, workers in this field are often employed by casinos and gambling industries and theaters. Entertainment attendants and related workers earned a median of $523 per week in 2018, well below the U.S. weekly median of $900, which is equivalent to $46,800 annually.

Hotel desk clerks rank among the lowest paying jobs in the United States likely in part because it typically does not require education beyond a high school diploma, though some high-end places may prefer college graduates. These workers are often early in their careers – the most common age for a desk clerk is 23. Desk clerks typically make around $520 per week.

Unlike registered nurses, home health aides are not required to have any sort of college degree, though some workers in hospice centers must be certified. As the Baby Boomer generation continues to age, home health aides are expected to be in high demand. Though there are more than 1.4 million home health aides currently, the BLS predicts employment in the field will grow 41 percent over the next decade, more than five times faster than the average job growth.

The median weekly wage for a personal care aide is $500, one of the lowest wages in the country. (Photo: KatarzynaBialasiewicz / Getty Images)

For working parents, child care is a necessity and child care workers are essential. These workers help children with dressing and feeding and supervise them throughout the day. The median earnings of a child care worker is $26,000 per year, well below the overall U.S. median of $46,800.

Sewing machine operators are some of the lowest paid workers in the United States, earning a median of less than $26,000 annually. Still, these jobs are disappearing in the U.S. apparel industry as companies automate production and are able to find less expensive labor sources in other countries. In 2014, the BLS projected sewing machine operating jobs would decline 16.7 percent by 2024.

Since the federal minimum wage for tipped workers is less than one-third the minimum wage for all workers, servers in many states must rely on tips to make up the difference (Photo: Orbon Alija / Getty Images)

The federal minimum wage for tipped workers is less than a third of the minimum wage for all other workers. While some states require employers to pay servers higher wages, in most states servers must rely on tips to make up the difference. This, coupled with the fact that servers are often younger and professionally inexperienced, are some of the reasons for the profession’s low wage.

More and more Americans are shopping online, but the growth rate of people who hand package items in warehouses is slowing. Hand packaging jobs are projected to grow 1.8 percent by 2024, whereas the average job is projected to grow 7.4 percent over the same time frame. This slow job growth is attributable to the increased automation in the field. As unskilled workers, packers are not well-compensated, with most earning less than $26,000 per year.

Though many cooks attend culinary school before they begin working, most cooks learn their trade through on-the-job training. Cooking can be a difficult job as it requires long periods of standing and non-traditional working hours. Demand for cooks is projected to increase about 6 percent by 2026, roughly equivalent to average growth across all jobs.

Non-restaurant food servers, such as those in hospital cafeterias and hotels, earn a median of $484 per week, or just over $25,000 per year. Many in the profession are part-time workers, and demand for these workers is projected to grow slightly faster than average. There is a high turnover rate for non-restaurant food servers, meaning there are likely always a high number of jobs available in the field.

Hosts and hostesses are one of several food service jobs to rank among the 10 lowest paying professions in America. It is a position overwhelmingly held by women, particularly those age 25 and younger. Like many other positions in the food service industry, hosting does not require any formal education and typically pays relatively low wages.

Maids and housekeeping cleaners are most often employed by hotels and other accommodation services. These workers are more concentrated in tourist destinations such as Hawaii and Las Vegas. As a job that is part of the tourism industry, growth for this position depends heavily on a strong economy.

Americans working as cashiers are especially susceptible to job loss due to automation. Fast food restaurants have already begun replacing cashiers with computer kiosks that can take orders and payment from customers. Though the BLS projects 7 percent average job growth nationwide by 2026, the number of cashiers is projected to decrease by 1 percent in the same time frame.

As automation increases, the number of cashiers is projected to decrease by 1 percent by 2026. During that time, average job growth is expected to be about 7 percent. (Photo: sturti / Getty Images)

Food preparation workers generally assist cooks with tasks like chopping, peeling, and preparing cold foods. As these workers operate under the supervision and direction of cooks, they are typically not as well paid as cooks – a job that also ranks on this list. The median earnings of a food preparation worker is about $24,000 in a year.

Dining room and cafeteria attendants and bartender helpers, often known as bussers or bar backs, work one of just four American jobs that typically pay less than $24,000 per year. These workers clean and bus tables and provide cooks and bartenders with ingredients they need. An unskilled job that requires only brief on-the-job training, these food service jobs are projected to be in high demand in the coming years.

Dishwashers are commonly employed in restaurants, hospitals, hotels, and anywhere else that serves food. Washing dishes is one of the few low paying jobs that is male dominated – over 80 percent of dishwashers are men. A low-skill job, dishwashing is one of just three fields that usually pays less than $23,000 per year.

Combined food preparation and serving workers have to both prepare and serve the food, often at chain fast food establishments. These workers are often paid at or near minimum wage. As the popularity of fast food and fast casual restaurants continues to grow, the amount of jobs in the field is also expected to increase. The BLS projects this type of employment will grow 16.8 percent by 2024, more than double the average job growth rate.

Many of the lowest paying jobs in the country are generally held by younger people, but laundry and dry cleaning workers are, on average, 44.8 years old. (Photo: kali9 / Getty Images)

Laundry and dry-cleaning workers are the lowest paid workers in the United States, earning a median wage of $432 per week, or $22,464 per year. These jobs are most common in densely-populated areas with high shares of renters who do not usually own a washing machine. Many of the lowest paying jobs in the country are generally held by younger people, but laundry and dry cleaning workers are, on average, 44.8 years old.