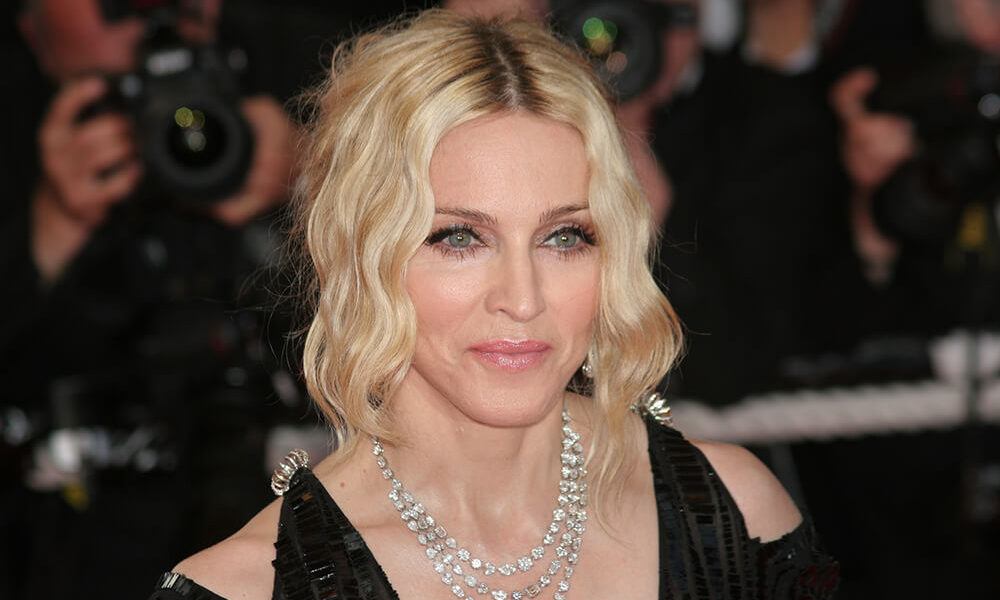 Contestants from 41 countries walked an orange carpet in Tel Aviv’s “Culture Square” on Sunday for the opening ceremony of Eurovision 2019, brushing aside security concerns and calls for a Boycott, Divestment and Sanctions (BDS) boycott.

Controversy, however, continues to swirl around the 64th Eurovision Song Contest where the semi-finals were held on Tuesday evening and will be held again on Thursday ahead of the grand final on Saturday. Tel Aviv was chosen as the locale as it is Israel’s hub of entertainment and business enterprises of all stripes.

According to a Haaretz report, the winning 10 acts will qualify for Saturday’s Grand Final.

Last year’s winner, Israel’s Netta Barzilai, opened the show on Tuesday night with a special version of her song “Toy” which catapulted her to fame this time last year in Lisbon. The winning country customarily hosts the following year. Photo Credit: Shutterstock

Last year’s winner, Israel’s Netta Barzilai, opened the show on Tuesday night with a special version of her song “Toy” which catapulted her to fame this time last year in Lisbon. The winning country customarily hosts the following year.

Eurovision fans at home may vote if they are from one of the 17 countries participating in the semi-final, as was reported by Haaretz.

The so-called “Big Five”–Britain, France, Germany, Italy and Spain–automatically get into the Grand Final as they make the biggest financial contributions to the European Broadcasting Union (EBU), which produces the competition. In addition Israel, as the host country, pre-qualifies, according to the Haaretz report.

Viewers from Israel, France and Spain are eligible to vote in the first semi-final while people from Britain, Germany and Italy may vote in the second one. 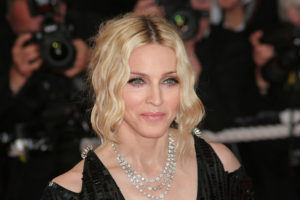 Superstar pop icon Madonna was scheduled to perform at the conclusion of the Eurovision contest, despite pressure from anti-Israel forces to cancel her appearance. According to a Reuters report, the “Material Girl” said, “I’ll never stop playing music to suit someone’s political agenda nor will I stop speaking out against violations of human rights wherever in the world they may be.” Photo Credit: Shutterstock

Superstar pop icon Madonna was scheduled to perform at the conclusion of the Eurovision contest, despite pressure from anti-Israel forces to cancel her appearance. According to a Reuters report, the “Material Girl” said, “I’ll never stop playing music to suit someone’s political agenda nor will I stop speaking out against violations of human rights wherever in the world they may be.”

“My heart breaks every time I hear about the innocent lives that are lost in this region and the violence that is so often perpetuated to suit the political goals of people who benefit from this ancient conflict. I hope and pray that we will soon break free from this terrible cycle of destruction and create a new path towards peace,” she added.

Reuters reported that Madonna, 60, is expected to perform two songs in Tel Aviv, one from her upcoming “Madame X” album to be released in June. In recent interviews, Madonna had said that she had chosen the name of her upcoming album from the nickname that she was dubbed by her first dance instructor when she arrived in New York City in the late 1970s from her native Michigan.

She had taken her world tours to Israel in 2009 and 2012 and is a follower of the mystical form of Judaism known as Kabbalah. Reports circulated in recent years that Madonna had considered purchasing property in or near the ancient Kabbalistic city of Tzfat in northern Israel.

They include funding teachers’ salaries at schools in the Gaza Strip through the United Nations Palestinian Refugee Agency UNRWA and micro loans to female farmers through the Palestine Fair Trade Association. The foundation also supports Americans for Peace Now, which campaigns for a diplomatic solution to the Israeli-Palestinian conflict.

Israel has launched a PR campaign to counter calls for a boycott of the Eurovision contest by the international boycott, divestment and sanctions (BDS) movement. Security has been tight in Tel Aviv amid fears that activists may seek to disrupt the competition.

Haaretz reported that last Wednesday, the Gaza-based Palestinian Artists Association called for a boycott of Eurovision, saying that Israel was using the event to “perpetuate oppression, promote injustice or whitewash a brutal apartheid regime.”

As the Eurovision ceremony began, more than a dozen local and international BDS activists held a solidarity protest with Palestinian prisoners, briefly blocking one of the main entrances to the opening ceremony for 20 minutes, according to a Haaretz report. They were removed by 20-30 police and border police, who relocated the protestors to a different section, where the protest was allowed to continue, as was reported by Haaretz.

One protester, Sophia Ton, a musician from Russia, told Haaretz: “I am against cultural washing and the withdrawing of the world community’s attention from the Israeli-Palestinian crisis. You cannot host a cultural, music event in a place with a racist, apartheid regime. Art and culture should be a messenger for change, not for hiding the truth.”

Haaretz reported that BDS activists have called on artists and broadcasters to withdraw, saying that holding it in Tel Aviv amounted to “artwashing–whitewashing through arts” Israel’s policies toward Palestinians in the occupied West Bank and Gaza.

According to the Independent of the UK, the rock band ‘Alice Wolf’ have joined the boycott of this year’s Eurovision Song Contest.

The Mercury Prize-winning band spoke to Sky News, where they accused Israel of “weaponizing culture” and of being “serial human rights abusers”.

Wolf Alice guitarist Joff Oddie claimed that the country was using Eurovision and wider culture to “whitewash over their human rights abuses”, and said the boycott was a response to “a call from Palestinian civil society”.

“If you say you’re not gonna go to Israel, then lots of people ask you why you’re going to other countries where you don’t believe in their government’s actions,” frontwoman Ellie Rowsell added. ”People ask, ‘Why do you go to America? Does that mean you support Trump?’

“And I can see why [they] think that’s hypocritical, but you won’t do anything if you think like that. Everywhere’s f****d, and in terms of the cultural boycott of Israel, that’s what the Palestinian people have asked for.”

Meanwhile, the Times of Israel has reported that the Israeli government had taken steps to set up a public relations campaign aiming to counter calls to boycott the Eurovision Song Contest, according to a report on Friday.

The initiative posts advertisements on Google which appear to be in support of the boycott movement, but which actually link to a pro-Israel website, as was reported by Reuters. The campaign’s website describes Israel as “Beautiful, Diverse, Sensational,” a play on the initials of the movement.

The website, boycotteurovision.net, highlights Israel’s attributes with videos featuring footage of Eurovision contestants, Tel Aviv’s gay pride week and tourist sites around the country, alongside photo montages and talking points playing up Israel’s diversity, landscapes and culture, according to a Times of Israel report.

The Israeli counter-campaign, according to a Haaretz report, confronts and formidably challenges incessant BDS attacks and accuses some BDS supporters of being anti-Semitic or having ties to militant groups such as Hamas and the Popular Front for the Liberation of Palestine.

Israel’s Ministry of Strategic Affairs and Public Diplomacy confirmed that it was running the campaign.

In a report that appeared last Thursday in the Guardian of London, the Israeli foreign ministry said that they intended to bar entry to people known to be planning to disrupt the contest.

Foreign Ministry spokesperson Emmanuel Nahshon told the British newspaper that Israel would only ban those who broke Israeli law, which includes a prohibition on support for boycotts of the Jewish state, according to a Haaretz report.

“This is going to be a huge party in which thousands of people will participate but we will remain extremely vigilant in order to make sure that no one comes here in order to disturb and destroy,” Nahshon said, according to The Guardian. 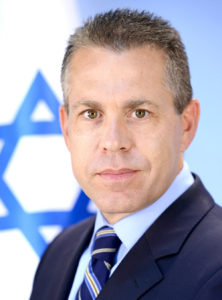 Strategic Affairs Minister Gilad Erdan, whose office is in charge of battling BDS, reacted on Twitter to a report about Israel attempting to prevent BDS activists from arriving in Israel for the Eurovision competition. He said that the report that was originally in the Guardian of the UK was “another lie” put forth by the paper. Photo Credit: Wikipedia

However, Strategic Affairs Minister Gilad Erdan, whose office is in charge of battling BDS, reacted to the report on Twitter, saying it was “another lie by The Guardian.”

Haaretz reported that concerns had been raised that the contest could be disrupted by a surge in cross-border violence between Israel and Hamas terrorists in Gaza, who are being supported by the Iranian regime. A cease-fire that went into effect a week ago has been holding thus far.

The Presenting Partner of the 2019 Eurovision Song Contest is a group known as MyHeritage. As part of their One Big Family project, they have extensively researched the background of several of Eurovision’s contestants based on their DNA profile.

The first semi-final was opened by last year’s winner, Netta Barzilai. Netta’s MyHeritage DNA results showed the different journeys her ancestors took before her grandparents met, and even gave her a few surprises. She is 51.4% Sephardic Jewish from North Africa, 45.4% Ashkenazi Jewish, 1.7% Baltic, and 1.5% Irish, Scottish, and Welsh. Netta was thrilled to discover that she has some Irish DNA and shared her lifelong affinity for the Irish people.

Netta’s great-grandfather, Natan Barzilai, was from the town of Tomashov Lubelski in Poland. His original family name was Szpisajzen, and he changed it to Barzilai, both of which mean blacksmith.

It was reported that one of the DNA researchers also has family origins in Tomashov Lubelski, and he has a map of the town from the late 1930’s that lists the names of the residents. The family name Szpisajzen appears in several places.

The same researcher traveled to Poland and tirelessly searched for clues that would help him find out where Natan lived. He sifted through documents at the local and state archives, and with the help of some local residents, was able to finally locate Netta’s great-grandfather’s home.

As he added new details to Netta’s family tree, he discovered that he and Netta are in fact related by marriage!

Netta’s grandfather married Netta’s grandmother Ilana. Ilana’s close resemblance to Netta is quite striking! Netta was very moved by the image of her grandmother and spoke about the profound impact she had on her life.