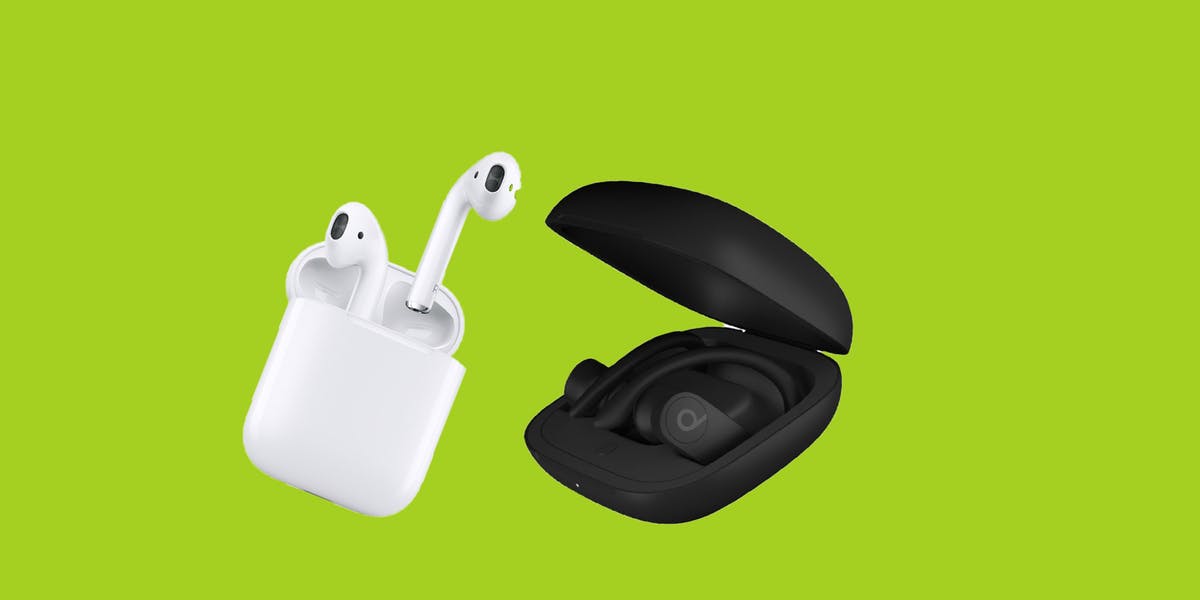 It’s been a busy month for Apple news: The very day that the company announced its suite of new gaming, streaming, and consumer lending services, it also released the iOS 12.2 update to the public. In addition to Apple News+ integration and a few new Animoji characters, iOS 12.2 may have also revealed future details about one of the Cupertino-based company’s wireless earbuds.

Apple already upgraded its AirPods this year, and it appears the company will very soon drop a wireless version of the Beats Powerbeats headphones. 9to5Mac unearthed renders of the upcoming “Powerbeats Pro” earbuds hidden in iOS 12.2. This comes only a week after CNET reported that the Apple subsidiary was gearing up to launch a cordless version of its popular workout earbuds.

The designs look very similar to the Powerbeats 3 that were released in 2016 and retail for $200, but with a few distinct AirPods characteristics. The fusion of the two products could be a match made in heaven, as the Powerbeats line remains a popular alternative to the AirPods for users with a bigger focus on fitness.

Here are breakdown of how the leaked earbuds square up to the AirPods:

The Powerbeats Pro moved one step closer to the AirPods by ditching the connective wire that tethered the Powerbeats 3’s two individual buds together. That means that the previous Powerbeats were only technically wireless: While you could obviously use Bluetooth to play audio instead of a physical connection, the Powerbeats Pro 3 was still encumbered by a necklace-like cord.

Apple has done away with that completely, making each an individual earpiece much like the AirPods.

It looks like the new Powerbeats will come in two colors: 9to5Mac reported that they found both white and black variations to the Powerbeats Pro, giving them an extra color variation compared to the only-white AirPods. This makes sense as the Beats have usually embraced more color variants. The current generation Powerbeats 3 are available in white, black, and a red-and-black combo.

The most notable difference between the Powerbeats Pro and the AirPods series are the Beats’ ear hooks. These rubber grips are one of the Powerbeats’ major selling points as they ensure that the buds won’t slip out during a run or some other kind of workout.

By eschewing the hooks, the AirPods opt for a less-practical, but ultimately sleeker and more comfortable look that’s better for casual use or wearing for your commute. This has turned the AirPods into almost more of a fashion or office accessory than workout gear.

Based on the leaked renderings, Apple chose not to change the Powerbeats 3’s ear tips. The AirPods make use of an outside-the-ear tip that rests on the outer area of users’ ear canals. It looks like, at least in the meanwhile, the Powerbeats Pro will continue using the in-ear tips to achieve better grip during workouts.

The inclusion of in-ear tips also suggests that the tips will be soft and made of rubber — like the Powerbeats 3 — and won’t use the same hard-plastic shell as the AirPods.

The render also gives us some clues about the charging case. In the 9to5 image, The Powerbeats Pro’s rounded charging case looks very similar to the AirPods’ case, though a few of the details remain unclear, for example whether it will charge wirelessly. The device pictured certainly has a Lightning Connector port on the back along with a small, red light on its front to notify users that it’s charging.

The recently upgraded AirPods received Apple’s latest H1 chip, which the company said bolstered battery life, improved connectivity, and enabled hands-free “Hey, Siri” functionality. It’s obviously hard to glean much about the Powerbeats Pro’s internals based on a render, but past patterns suggest the two lines have shared similar chipsets in the past.

The Powerbeats 3 came with Apple’s W1 chip, the same chipset that was inside of the original AirPods that also launched in 2016. Seeing as Beats’ leaked buds appear to be slightly inspired by the AirPods’ form factor, they will more than likely tout the same specs again this time around.