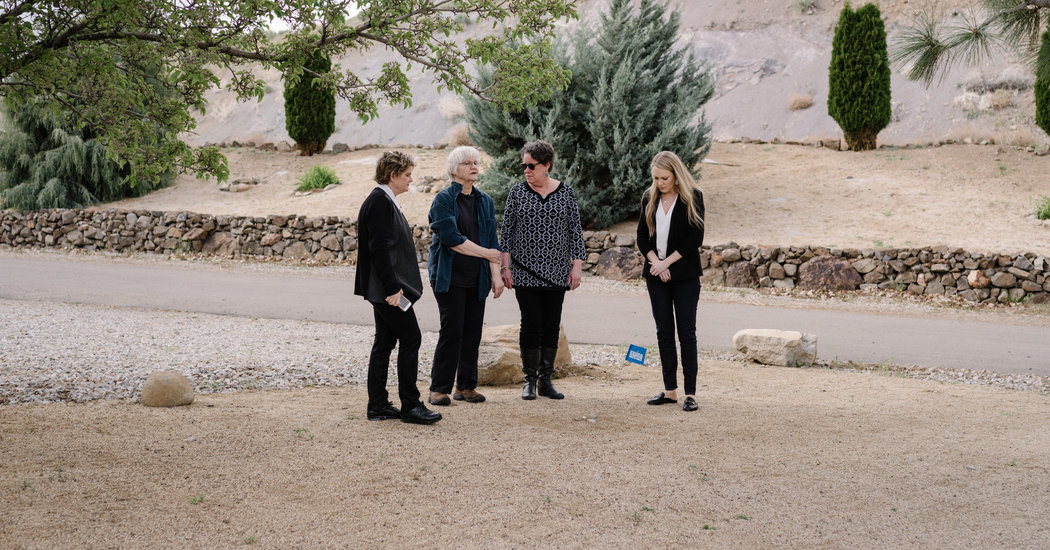 One could not select a more serene location for a homicide. On July 17, 1982, a woman’s body was found in a meadow in the mountains that run along the border between California and Nevada, not far from Lake Tahoe.

Footprints revealed that she and her killer had strolled half a mile or so from the road to an area known as Sheep’s Flat. It appeared that she was seated on a log when she was shot in the back of the head.

“I found that unusual,” said Len Iljana, who was a deputy at the Washoe County Sheriff’s Office at the time.

For years, he and his colleagues tried to identify the woman. They circulated news releases that stated she was in her 20s or 30s, five and a half feet tall with hazel eyes and brown hair, which she wore in a bun at the time of her death. The quality of the dental work suggested she might be European. Her last meal was a salad. None of that led anywhere.

The team became desperate enough to explore leads from psychics, he said.

On Tuesday, more than 36 years after she died, the Washoe County Sheriff’s Office announced her name: Mary Edith Silvani, born Sept. 29, 1948. Detectives also believe they now know who killed her.

These two puzzles of identity were solved with genetic genealogy, a technique that puts a name to DNA with the help of relatives on genealogy sites. Over the past year, the method has been used to advance dozens of cold cases. This is the first time officials have announced in one fell swoop that the technique has been used to identify an adult victim’s body as well as the person’s killer.

The role that a group of volunteer sleuths played in the investigation is a bit different from that in other recent cases. The role played by infidelity and adoption is very much the same.

In February 2018, investigators in Nevada heard about a method for identifying DNA developed by Colleen Fitzpatrick, a physicist turned forensic genealogist. They contracted the DNA Doe Project, an organization founded by Dr. Fitzpatrick and Margaret Press, a mystery writer and software developer.

After uploading the victim’s DNA to GEDmatch, a genealogical database, the group had a relatives list to work with. Each volunteer was assigned to build a tree around one match. Whenever volunteers ran into trouble, they knew they could throw it out to others who would “pounce on it like a bunch of sharks,” said Ruth Foreman, a retired human resources director who served as a team leader for the group.

One common reason to do a DNA test is to find a parent, so many people on genealogy sites are adoptees. One close relative of Ms. Silvani’s fell into this category. The volunteers helped identify her mother. From there, they quickly arrived at a couple who seemed as if they could be the victim’s parents: John and Blanche Silvani of Detroit.

A relative said the Silvanis had one son and two daughters. The volunteers found that in 1982, the year Ms. Silvani was killed, the son, Charles Silvani, jumped off a parking structure in San Diego and died. His life had been troubled for years: In 1972, he killed a bar owner in Fresno, Calif.

A tip from a man claiming to be Ms. Silvani’s nephew revealed that there was another brother, Bob, whose profile page on the Internet Movie Database revealed mostly pornography projects from the 1970s, according to Cheryl Hester of Frisco, Tex., a volunteer charged with taking screenshots of his face. “They never looked at the camera,” she said. “It was awful.”

Eventually property records led to a former neighbor of John and Blanche Silvani’s in Detroit. He clarified that the couple had two sons and one daughter — not one son and two daughters. That meant Sheep’s Flat Jane Doe had to be Mary Edith Silvani, who was 33 at her death. Had she lived, she would be 70.

Detective Kathleen Bishop of the Washoe County Sheriff’s Office located a 1974 misdemeanor arrest for loitering in Detroit. The fingerprints matched.

The DNA Doe Project seeks to identify only bodies, not killers. Dr. Fitzpatrick leads a separate organization, Identifinders, that tracks down suspects.

Upon uploading a DNA profile to GEDmatch that had been extracted from semen discovered at the scene, Dr. Fitzpatrick identified a second cousin living in Texas. From there, Ms. Hester, who honed her genealogical skills by helping Vietnam War babies find their fathers, took the lead. She eventually identified a man who seemed likely to be the suspect’s father. Family records showed he had one son.

Law enforcement was dispatched to collect discarded DNA when the son left his house. But he never emerged, Dr. Fitzpatrick said, because he had recently died.

That was not the end. Investigators located a son of the newly deceased man in a criminal database. It ruled out his father as the killer. What did that mean? It meant the deceased man had a half brother, one he might not have known about.

Confused? Actually, discrepancies between families as defined by records versus by DNA are common. Follow any family line long enough and you are will encounter at least one “nonpaternity event,” to use genealogists’ polite term. Sometimes they involve infidelity.

Critics of this new approach to cold cases warn that sooner or later confusing family records will lead to the wrong person. Forensic genealogy has misled the police before. But for defenders of the approach, its complexity is part of the reason they say critics are overreacting: Even though most Americans’ DNA is now identifiable, you cannot simply upload DNA into a machine that will pump out a name.

Sometimes, to get from point A to point B, you must build a tree containing 16,000 people. That is what Ms. Hester did. Eventually, another critical match emerged, and a 90-year-old relative agreed to upload DNA.

That led to James Richard Curry, born in Texas in 1946. The more Ms. Hester read, the more excited she grew. He had confessed to three murders around the time of Ms. Silvani’s death and went after people he knew. He killed himself in January 1983, but his children offered their DNA, providing investigators with the confirmation they needed.

The team was elated. And frustrated. Mary Edith Silvani had a name, but she was still just a collection of facts. She was born in Pontiac, Mich. to a mother who spent her life in and out of mental hospitals and a father who died when she was 16, leaving her homeless. She may or may not have had a baby whom she gave up for adoption in Detroit. She never had a driver’s license, as far as the team could tell. She was never reported missing. She wore a blue bathing suit under her Lee Rider jeans, hinting at plans to swim on the day she died.

Ms. Silvani’s nephew, Robert Silvani Jr., 53, was the closest living relative located. He barely knew his own father and had never met his aunt.

“She gets to be remembered now,” he said, adding that, in a “family with the background mine has,” he’s grateful anytime something works out.