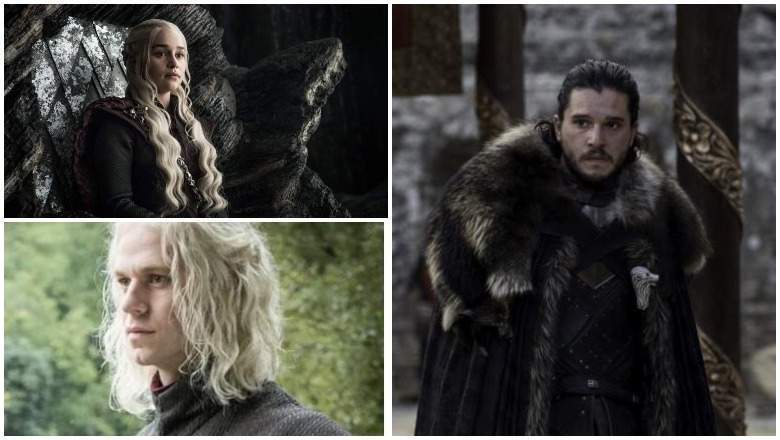 The Targaryen family tree sure can get complicated, and now Jon Snow is caught up in the middle of it on Game of Thrones. Is Daenerys really Jon Snow’s aunt? How are they related? And how does that make him related to the infamous Mad King? The Stark and Targaryen family trees rarely mix, so here’s a detailed look.

From back in history, Starks and Targaryens have been separated. The Starks have been in the North as far back as anyone can remember, descended from the First Men. (The Night King himself was originally a First Man whom the Children of the Forest stabbed in the heart with dragonglass, turning him into the creator of the White Walkers and the wights.) The Targaryens, meanwhile, are an offshoot of the Valyrians and the only branch to survive the Doom of Valyria because they were at Dragonstone, not Valyria, when the mysterious doom happened. Dragon fire had never been tried on the Night King before this season, according to Bran, which means the Valyrians didn’t interact with this part of Planetos, until the Targaryens conquered Westeros long after the original Long Night.

While the Targaryens have a special bond with dragons, the Starks have a bond with direwolves, which means both family trees have magic in them. Jon Snow, as part Targaryen and part Stark, could theoretically be stronger in the “magic” arena, which is why he has had bonds with both a direwolf and a dragon.

Here’s something you may not have considered: with all this speculation about Dany inheriting the Mad King’s craziness, Jon Snow easily could have too. The Mad King Aerys Targaryen is Daenerys’ father (and also the father of Rhaegar and Viserys.) Because Rhaegar is Jon Snow’s dad, that makes the Mad King the grandfather of Jon Snow. So yes, those crazy genetics are in Jon’s blood too.

There are a few theories about why Aerys went mad. One is that it has to do with inbreeding, since Tagaryens prefer to marry and have children within their own bloodline, believing they have magical dragon blood.

Another theory is that Bran somehow caused him to go crazy. Aerys was hearing whispers when he went crazy. We saw that Bran was able to speak into the past at the Tower of Joy and younger Ned Stark heard him. Bran was also able to affect Hodor and essentially cause him to lose his mind. Did Bran do the same to the Mad King? Since Bran told Tyrion recently that he spends most of his time in the past these days, I’m guessing that yes, Bran was the cause of Aerys’ madness.

So Rhaegar Targaryen (Dany’s older brother) secretly married Lyanna Stark (Ned Stark’s sister) after annulling his marriage to Elia Martell (Oberyn’s sister.) (Oberyn was killed by The Mountain in that gruesome fight scene many seasons ago.) Rhaegar and Lyanna had a baby boy: Jon Snow. Ned pretended Jon was his bastard son so Robert Baratheon wouldn’t kill him. This makes Dany officially Jon’s aunt. To Jon that could be weird, but to Dany it isn’t because Targaryens marry their own relatives pretty regularly.

Dany never met Rhaegar in person; he was dead long before she was born. Barristan Selmy told Dany that Rhaegar used to disguise himself as a minstrel and play in King’s Landing. He usually gave the money he made to other minstrels or orphans. He said that despite Rhaegar’s history, he actually never liked killing and preferred singing.

Rhaegar was killed in “Robert’s Rebellion,” during a battle called the Battle of the Trident by Robert Baratheon, Lyanna Stark’s betrothed. Robert was king and sat on the Iron Throne when Game of Thrones first began, and he and Ned Stark were close friends. Robert is also the father of fan favorite Gendry.

Robert killed Rhaegar with a single blow from his warhammer. Rhaegar was wearing armor encrusted with rubies, and the rubies were scattered under the water. Shortly after his death, Jaime killed Rhaegar’s dad, The Mad King. Book readers have theorized that Rhaegar wasn’t really killed, but someone glamoured to look like Rhaegar. This is because Rhaegar was wearing rubies, and we all know that Melisandre used a ruby necklace to glamour her appearance. This theory likely will never see the light of day on the TV show.

For a recap, here’s Jon Snow’s family tree, as shared on Reddit:

Here’s a comprehensive family tree shared on Reddit of almost all the characters:

READ NEXT: Was Ghost a Good Boy? Take This Poll & Let Us Know.