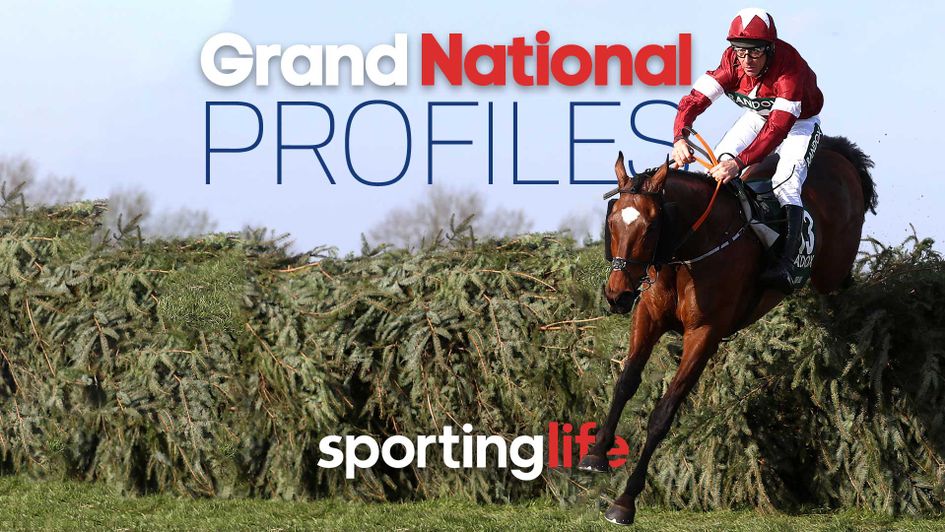 Our racing expert Ben Linfoot picks out five big outsiders to consider for the Randox Health Grand National at Aintree on Saturday.

For all the safety modifications and the tinkering of the weights from the handicapper, the Grand National remains an incredibly difficult puzzle to solve.

Who would’ve thought it – huh? – as 40 brave horses do battle over (still) the biggest 30 fences in racing.

It’s not quite four-and-a-half miles these days, but it’s still the longest race of them all at the extended 4m2f and anything can, and invariably does, happen.

So, however you play this great race, there’s at least room for one humongously-priced each-way outsider in your National ledger. Just make sure you take those odds early doors.

JP McManus has won the Grand National once, with Don’t Push It, from 58 runners in the race and his main hope this year is Gold Cup runner-up Anibale Fly, who was fourth in the Aintree spectacular last season off a 5lb lower mark.

He has an incredibly tough task off top weight this time around, though, and it could be worth looking out for one of the McManus coloured caps lower down the weights, specifically the one sported by the jockey of REGAL ENCORE.

The man on board is likely to be Richie McLernon, who currently sports the moniker of ‘jockey that went closest to winning the National without actually winning it’ following his nose second on Sunnyhillboy behind Neptune Collonges in 2012.

Last year he was robbed of a ride in the race when Regal Encore was pulled out at the 11th hour due to ‘abnormal bloods’, but hopefully the pair get the chance to line-up this time around as this horse has enough in his favour at big odds.

Those things are – a) he’s experienced the race before having hunted his way around for eighth in 2017, b) he’s handicapped to have a say off 152 having won a handicap off 150 in the past and c) his prep and only chase start of the season went well at Ascot last time (travelled well, finished third, despite losing a shoe).

He’s by King’s Theatre, as well, which I like, a sire that has produced plenty of strong stayers like Balthazar King and Royale Knight.

The negative is he’s been pulled up on six occasions in his career and whether he has the resolution for such a test is a concern. However, we can take positives from his eighth in this race two years ago and if he is on a going day I can see him running really well.

It’s always worth watching the previous year’s Grand National to get your eye in for Saturday and the 2018 renewal has particular significance with the top four from last year; Tiger Roll, Pleasant Company, Bless The Wings and Anibale Fly all set to line up again.

However, if you do refresh your memory with a replay of Tiger Roll’s success, be sure to keep an eye on the Gigginstown white cap, VALSEUR LIDO, who was given a super rail-hugging ride from Keith Donoghue on the inside.

He took to the fences really well, jumping nicely throughout, and he still had a chance four out before his stamina really started to peter out two from home. He lost a few places on the run-in, as well, eventually finishing a 56-length eighth.

The ground was heavy, though, and he was carrying 11st7lb from a mark of 158. This year conditions aren’t likely to be as testing, while his National rating is 12lb lower and he carries 10st6lb from a mark of 146.

There’s obviously a reason for that; he hasn’t been very good this season. But, if the Aintree fences spark him into life, he becomes a very interesting outsider. After all, he’s a triple Grade One winner over fences and he has form in this race. That’s just the sort of 100/1 shot I like.

The red-hot Rachael Blackmore takes the ride, also. That’s reason enough to expect a hefty enough shortening of his odds.

Gigginstown are likely to have 10 contenders in the race, including Tiger Roll and Valseur Lido, but I couldn’t write a feature on National outsiders without considering one of Gordon Elliott’s underlings.

All of the attention will be on the favourite, but Elliott has an army of National horses in his stable and some of them will be left in a Tiger-shaped shade. There could be value in those shadows.

MONBEG NOTORIOUS has a nice enough profile for an 80/1 shot. He’s a respectable three from 10 over fences, was sent off 8/1 for an Irish Grand National in which he finished eighth and his best run this season was his last one, when sixth in the Leinster National at Naas.

He was outpaced that day but kept on well for sixth, suggesting, not for the first time, that tackling a marathon trip might just unlock some more improvement.

Milan, his sire, is certainly adept at producing a proper stayer. Just look at Josies Orders, Mountainous, Big Shu, Milansbar and former National winner One For Arthur. There’s a chance that Monbeg Notorious needs a trip as well.

He looked a promising novice last year, this fellow. He won the Thyestes Chase by 11 lengths in a first-time visor, he won the Ten Up Novice Chase at Navan and he was second, albeit fortuitously, in that Grade One at Punchestown.

His second season over fences has taken time to catch fire. He came back in late and was stuffed on his first two appearances. But there was much promise in that Leinster National run.

With Sean Bowen booked (four from 19 at 21 per cent for Elliott), a season’s best looks highly likely considering his improvement last time. Having won in a first-time visor and first-time blinkers, it’s a potential headgear switcheroo I’ll be looking out for… 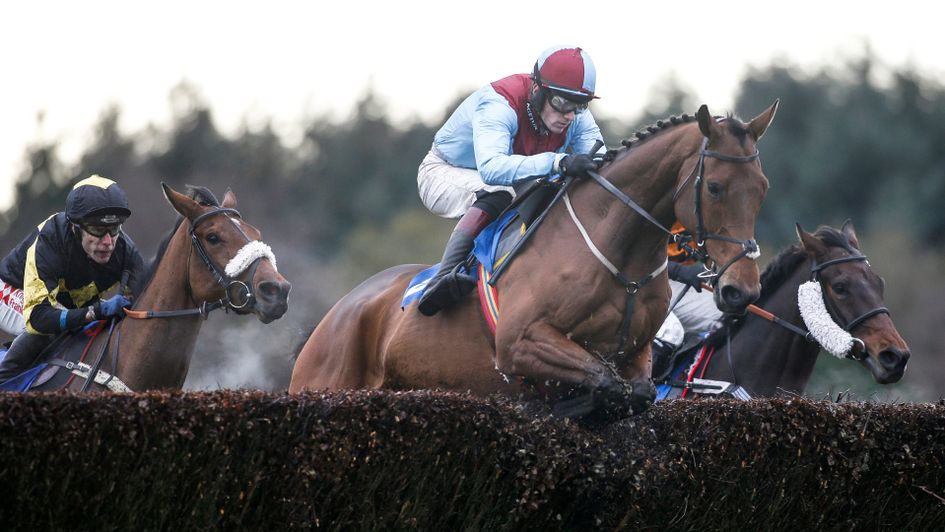 Nigel Twiston-Davies has won the Grand National twice before and he has a fine record in just about every race over the famous fences.

His last National winner was Bindaree in 2002 and he has two chances this year, Go Conquer, who jumps lovely but might be a doubtful stayer, and BALLYOPTIC who is very much all about stamina.

His novice chase form from last year stands up to close inspection, as he beat Elegant Escape by 13 lengths at Exeter, he beat Vintage Clouds by almost three lengths at Wetherby (giving him 3lb) and then he followed up his RSA Chase fourth with a nose second to Joe Farrell in the Scottish National.

With that super run in mind, his campaign looks to have been planned backwards from Aintree and it started in Liverpool, in the Becher, where he fell. An optimist (we have to be at these prices) will remember that Pineau De Re fell in the Becher before his National success.

His sixth in the Welsh National was a step in the right direction, but then he was pulled up in the Haydock Grand National trial on his latest start which is clearly not an ideal prep.

He’s 3lb wrong at the weights, as well, but the positives are his trainer’s record over these fences, his excellent novice chase form and his stamina, which was on show in that narrow Scottish National defeat.

Oh, he won the Grade One Sefton Novices’ Hurdle in 2016, too, a race that has produced a couple of National winners in recent years – Neptune Collonges and One For Arthur – while Saint Are, The Last Samuri and Blaklion were all placed in the big one having run in the Sefton earlier in their careers.

Finally, we get to JUST A PAR, and in a feature full of wild fantasies a win for this chap is the most outlandish vision of the lot.

Number 43 in the list, he’s not even guaranteed a run yet, but his participation does look more likely now with Sandymount Duke out and he’s another one with Sefton form having finished second in the 2013 renewal behind At Fishers Cross.

He’s run over the Aintree fences four times including in two Grand Nationals, and he at least finished the big race on both occasions giving hope that he’ll at least get round.

That immediately gets him on the each-way radar, then, and there are grounds to expect significant improvement from his Becher Chase run in December.

A well beaten seventh in that, he was hampered in the race and it was his first start for almost 600 days as well as his stable debut for Jimmy Moffatt.

Moffatt has previous, though, when it comes to rejuvenating a horse ahead of a National-fences assignment.

Back in 2015 he won the Becher with Highland Lodge on his stable debut, a horse that has placed in two subsequent renewals of that race, although he was pulled up on his only go at the Grand National.

At 12-years-old, he’s a longshot and deserves to be, but with his Sefton form, two completed Nationals and his new surroundings, he might strike something in the most optimistic of punters, a breed of folk that grow in number at this time of year.

GET THE FULL PICTURE: Don’t miss out on FREE video replays and our fantastic My Stable tracker. Log in now and become a Sporting Life Insider.