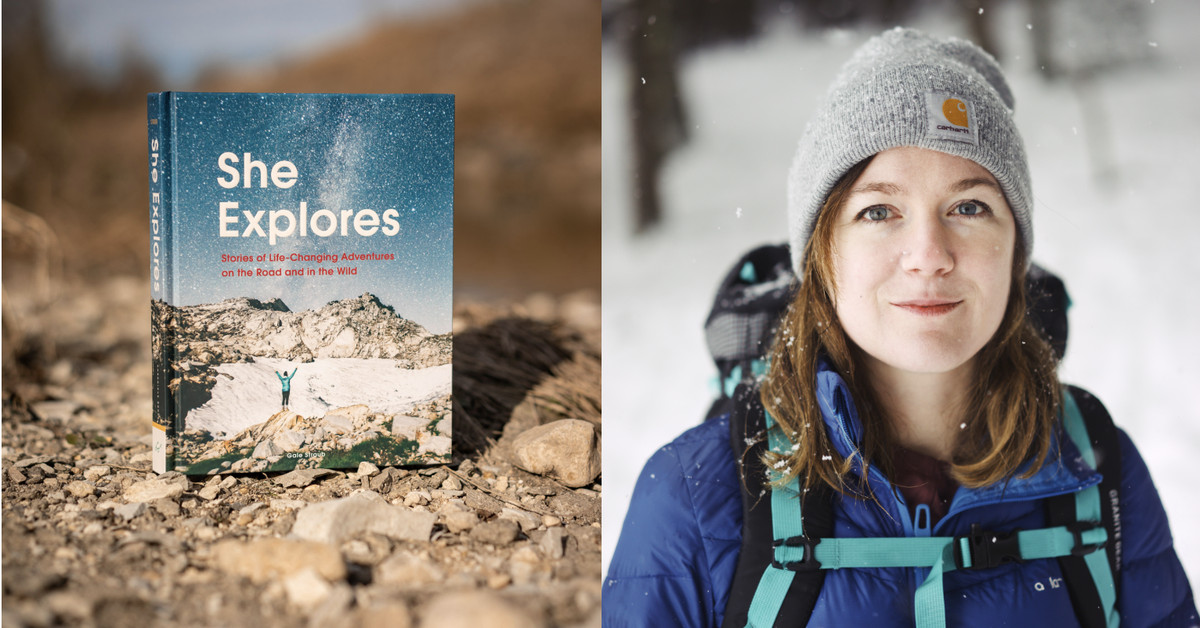 Who do you picture when you think of an outdooorswoman? That’s the question that kicks off She Explores, a new book about real adventures of women on the road and in the outdoors.

Author Gale Straub is one of those women. In 2014, she quit her job, bought a Sprinter van, and left on a year-long road trip with her partner. Back then, the #Vanlife movement was fairly new. Now, it’s a lifestyle. (Some have even moved on to #fakevanlife). The aim of Straub’s book is to serve as a starting point for “those who prefer to take the back roads home.”

While on the road, Straub started the She Explores website as a way to not only share her experiences, but also highlight and connect with other women who were doing the same thing. “I wanted to find a community of women who love the outdoors and its beauty as much as I do,” she writes in the introduction, “so I created a platform that allowed women to share their work and their thoughts with others.”

She Explores has expanded beyond just a website; there’s an Instagram account, a Facebook community, two podcasts — She Explores and Women on the Road — and, most recently, an in-person gathering for women in this community. The book is a sampling of the stories shared across these platforms, with poems, photographs, illustrations, and outdoor tips sprinkled through the different sections: stories from enthusiasts, creatives, founders and professionals, nomads, transplants, and advocates.

Along with three other people who make up the team, Straub spends her time researching and speaking with all kinds of fascinating women who are interacting with the natural world in some way. Her own personal inspiration for what she does now comes from her childhood in rural New Hampshire, hiking with her dad and watching her mom, a visual artist, work.

I spoke with Straub over the phone about the process of putting together this book, growing this community, and the inspiring women she meets along the way. Our conversation — edited for clarity and length — follows.

How did spending time outdoors while growing up in New Hampshire shape you today?

We sometimes have this idea in our head as to what “outdoorsy” means, or what it means to be an “outdoorsy person.” I never really thought about the way I grew up as spending time in the outdoors. You know when you’re a kid, you play outside and run through the woods, but it’s not the same as maybe learning how to start a fire and setting up a tent and backpacking, which I learned how to do later in life. But the way I grew up did instill an appreciation for nature, and also it instilled an appreciation for taking time to get to know a place intimately.

Fast forwarding, you spent a year in your 20s traveling around the US in a Sprinter van. What advice would you give to someone who’s interested in doing that, but doesn’t know how to take the leap?

My advice now is not the same as it would’ve been back when I did it [in 2014]. I started planning for it in 2013, maybe the end of 2012. I was an accountant, so I was very analytical, and I had a spreadsheet. I thought a lot about what I would need, and what my partner and I would need to do it together.

But now, there are so many more women who are doing it, and it’s so much more of a community. I would try to tap into some of those networks if it’s not something that your friends or family really understand.

How did you pick which stories and which images you were going to include in the book?

I really wanted to have a broad array of women, so that a lot of people could read the book and both find themselves in it, but also feel like they could learn about other people too. We’re always looking to see ourselves reflected, but it’s also wonderful to learn from other people.

I love the different ways people express themselves after spending time outside, or the way that the outdoors inspired you in that literal way. So I knew I wanted to have artists.

I knew I wanted to have women who were advocates in some way, too. So you can see the group Fat Girls Hiking is represented there, through Summer, the founder. And then there’s Theresa Baker, who has recently launched an Outdoor CEO Diversity Pledge. Even 10 years ago, you wouldn’t even see that many women in outdoor imagery — so a lot of progress has happened, but there’s still so much more work to be done.

I wanted to make sure that was reflected in the book because a lot of what’s going on in the outdoor industry is paralleling what’s going on nationally in the country. I didn’t want the book to be a complete fantasy, even though there’s a lot that is inspiration about it. And I wanted to elevate those people because they’re doing such important work.

I wanted to have people who’ve made a career in the outdoor industry or through environmental work, because that’s something I get a lot of questions about from younger people. So, I included Agnes Vianzon, the founder of Eastern Sierra Conservation Corps, which specifically tries to recruit women. It’s awesome that she found herself by doing that kind of work, and she wants to share that with other people.

The range of experiences in the book drives home the point that there isn’t one way to be a woman in the outdoors. Everyone from musicians to scientists to rock climbers is represented. Which of the highlighted experiences stand out to you?

Gretchen Powers’s story, because of the focus on mental health; that’s something that we talk about a lot in both the [Women on the Road] podcast and the blog.

Simone Martin-Newberry is another one. She’s a graphic designer, and her piece in the book is about the way she finds nature in urban spaces. Her [story] is really beautiful, and also reflects that there isn’t one way to experience the outdoors, and it’s not the way that you always think about it.

The thing I love about a lot of these women is that there’s something that defines them, but there’s a lot of overlap between people in terms of their interests. I love finding the connections between people. You think, “Oh, they’re on different sides of the country,” or, “They have these different sports that they’re into” — there are these commonalities as well.

Practical tips for the outdoors are interspersed between these women’s stories, which makes these seemingly aspirational lives feel within reach. One of my favorites, from the solo hiking section, is “always assume it’s going to rain.” Do you have any other go-to pieces of advice?

Among the tips for respectful recreation, you mention being considerate before posting on social media. It’s true that social media can be a double-edged sword of overexposure, and there are downsides to natural going viral. How do you square that consideration with She Explores, which uses social media to empower this community?

We did an episode of Women on the Road about overcrowding, and it tends to be a very controversial topic. Some people feel very, very passionately about not geotagging because of what can happen to specific spots. And then some people feel very passionate that it can be elitist to not share places with other people. I will say that if you go on our Instagram or blog, we’re not extremely specific about where places are; it’s more general than that.

It’s great to have more people spending time outside because then you end up with more stewards of the environment. But, if you are too specific, especially in certain places, as a person who is going to recreate, you should take into consideration how crowded a place is even when you pull up. If you see that the whole parking lot is overflowing with cars, maybe that’s not the place you should be going. That’s a personal choice. You can’t take away someone’s personal choice to recreate someone, but you can encourage people to use their best judgement.

I do think when people get more invested in trying outdoor activities, especially if you’re a beginner and you’re doing new things, over time, the better experiences you have, and the more respect you have for those places that you go. While you can’t make anyone do anything or tell people to behave in a certain way — and I would never want to — having positive content that you see yourself in or that you get to learn about other people, it’s overall a positive thing for the environment.

What do you hope is next for She Explores?

I’ve done 98 episodes of the podcast, and I feel like there’s still a lot more people to feature and topics to cover. I’ve never even done a hygiene episode — just about peeing outside [laughs].

Over time, we’re going to expand [Women on the Road] to cover more travel, not only just on-the-road but also international travel, and then continue to focus on outdoor adventures for She Explores in all those different shapes that it takes. And hopefully continuing to do events with Women on the Road. We’re a small team, so it’s slow growth, but I don’t see there being a lack of stories or people to feature.

She Explores hits shelves on March 26.

Watch this: What happens when nature goes viral