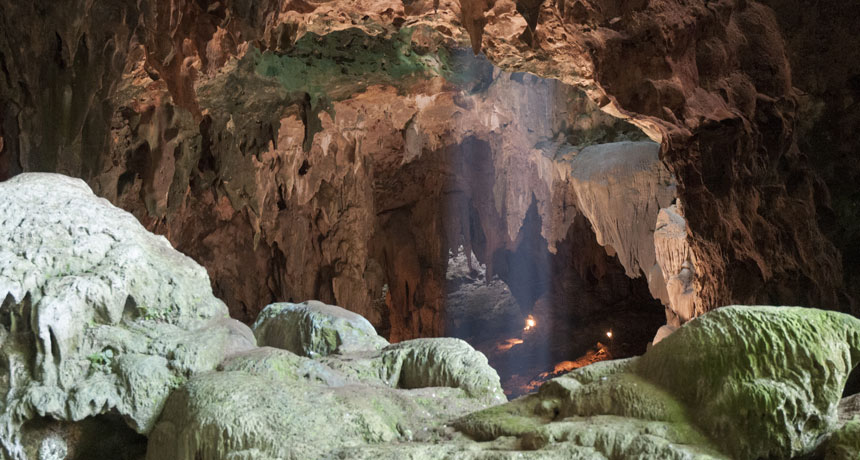 coauthor     One of a group (two or more people) who together had prepared a written work, such as a book, report or research paper. Not all coauthors may have contributed equally.

commentary     (in science) An opinion piece, often written to accompany — and add perspective to — a paper by others, which describes new research findings.

DNA     (short for deoxyribonucleic acid) A long, double-stranded and spiral-shaped molecule inside most living cells that carries genetic instructions. It is built on a backbone of phosphorus, oxygen, and carbon atoms. In all living things, from plants and animals to microbes, these instructions tell cells which molecules to make.

evolution     (v. to evolve) A process by which species undergo changes over time, usually through genetic variation and natural selection. These changes usually result in a new type of organism better suited for its environment than the earlier type. The newer type is not necessarily more “advanced,” just better adapted to the particular conditions in which it developed. Or the term can refer to changes that occur as some natural progression within the non-living world (such as computer chips evolving to smaller devices which operate at an ever faster speed).

evolutionary     An adjective that refers to changes that occur within a species over time as it adapts to its environment. Such evolutionary changes usually reflect genetic variation and natural selection, which leave a new type of organism better suited for its environment than its ancestors. The newer type is not necessarily more “advanced,” just better adapted to the conditions in which it developed.

extinct     An adjective that describes a species for which there are no living members.

fossil     Any preserved remains or traces of ancient life. There are many different types of fossils: The bones and other body parts of dinosaurs are called “body fossils.” Things like footprints are called “trace fossils.” Even specimens of dinosaur poop are fossils. The process of forming fossils is called fossilization.

genus     (plural: genera) A group of closely related species. For example, the genus Canis — which is Latin for “dog” — includes all domestic breeds of dog and their closest wild relatives, including wolves, coyotes, jackals and dingoes.

hobbit     Nickname given to Homo floresiensis, a small-bodied hominid species whose fossils have turned up only on the island of Flores, in Indonesia. The small-brained folk lived in isolation there until at least 18,000 years ago.

hominid     A primate within the animal family that includes humans and their ancient upright-walking relatives. Except for humans, all other hominids are known only from fossils.

Homo     A genus of species that includes modern humans (Homo sapiens). All had large brains and used tools. This genus is believed to have first evolved in Africa and over time evolved and radiated throughout the rest of the world.

Homo erectus     An extinct species of hominid that lived in Africa and Eurasia between about 1.9 million and 70,000 years ago.

hybrid     An organism produced by interbreeding of two animals or plants of different species or of genetically distinct populations within a species. Such offspring often possess genes passed on by each parent, yielding a combination of traits not known in previous generations. The term is also used in reference to any object that is a mix of two or more things.

paleoanthropologist     A scientist who studies ancient humans and hominid biology, also the behavior and evolution of hominids evolved. This field is based on the analysis of fossils, remnants, artifacts or markings created or used by hominids.

population     (in biology) A group of individuals from the same species that lives in the same area.

premolar     Also known as a bicuspid, this is one of the teeth located between the so-called canine tooth and the molars. Adult humans have two premolars on each side of the upper and lower jaws.

radioactive     An adjective that describes unstable elements, such as certain forms (isotopes) of uranium and plutonium. Such elements are said to be unstable because their nucleus sheds energy that is carried away by photons and/or and often one or more subatomic particles. This emission of energy is by a process known as radioactive decay.

radioactive decay     A process by which an element is converted into a lighter element through the shedding of subatomic particles (and energy).

sea     An ocean (or region that is part of an ocean). Unlike lakes and streams, seawater — or ocean water — is salty.

sediment     Material (such as stones and sand) deposited by water, wind or glaciers.

species     A group of similar organisms capable of producing offspring that can survive and reproduce.

unique     Something that is unlike anything else; the only one of its kind.

uranium     The heaviest naturally occurring element known. It’s called element 92, which refers to the number of protons in its nucleus. Uranium atoms are radioactive, which means they decay into different atomic nuclei.