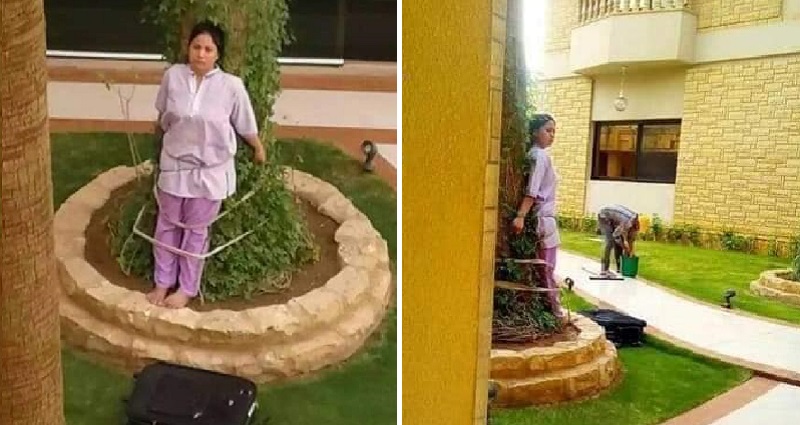 A Filipina maid who was recently tied to a tree by her employers in Saudi Arabia has been repatriated to the Philippines.

Lovely Acosta Baruelo, a 26-year-old overseas worker from the Philippines, made headlines after images of her indignity emerged on social media last week.

Baruelo had apparently angered her employers, a wealthy family in Riyadh, after leaving a piece of expensive furniture outside in the heat of the sun. The “punishment” was reportedly meant to show her the harmful effects of staying under the sun.

Her colleague, also from the Philippines, took photos showing Baruelo tied by her wrists and legs to a tree in her boss’ home garden on May 9. The co-worker also said that their employer would hurt them whenever they commit small mistakes.

Heartbroken by the unjust treatment, Filipino netizens clamored for help on behalf of the mother-of-two online.

In a statement, the agency revealed that the woman arrived in Manila at 8:55 p.m. on May 9.

After returning to her family in the Philippine province of La Union, Baruelo took to social media to express her gratitude to those who helped her and asked for more efforts in rescuing her co-workers who were left behind.

“Thank you so much to all those who helped me. I want to also ask help for the other Filipinos left there. They are the ones who helped me and uploaded my pictures. I am afraid for their safety. I hope they get rescued too,” she wrote on Facebook.