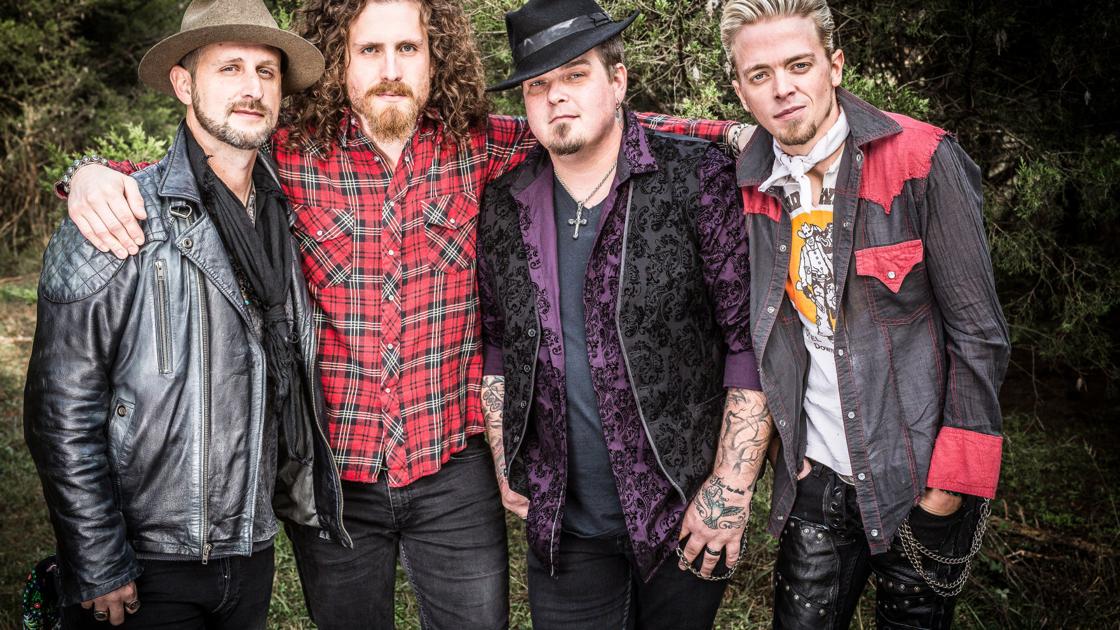 They’re musical royalty, Kentucky blue-blood running hot in their veins. Like a shotgun wedding of Led Zeppelin and the Marshall Tucker Band, Black Stone Cherry lays down window-rattlin’ rock with a bigfoot backbeat.

A little over a hundred miles from Nashville, just off the Cumberland Parkway, lies the metropolis of Edmonton, Ky., its 1,600 residents spread out over a 9-square-mile area. Although there’s plenty of room to maneuver, Edmonton’s second most famous residents spent a good part of their formative years in a 1940s-era shack in the woods just outside of town.

The rustic farmhouse has few creature comforts, no running water or insulation. But for the owners formerly known as Itchy Brother, it had been a creative haven since 1968, a place to hone and record some of their best known work and spread it around under the name they adopted in the ‘80s, The Kentucky Headhunters.

Black Stone Cherry drummer John Fred Young started using his family farm as a practice space for his own music while still in his teens. The place belongs to John Fred Young’s father and uncle, Richard Young and Fred Young, respectively.

Even though both bands were inspired by many of the same rock icons whose images were displayed on the walls of the practice shack: Cream, Led Zeppelin, the Stones and the Faces; the music that came through those filters veers off into two entirely different directions. The Headhunters headed off into the hills, covering Bill Monroe’s “Walk Softly On This Heart Of Mine” as a country rocking stomper, while BSC stomped around in the mud adapting a version of Howlin’ Wolf ‘s “Built For Comfort” that sounds more like heavy metal on ‘07’s “Black To The Blues,” delivered like a punch to the face.

The Headhunters recruit you with singalongs, encouraging you to create your own choreography (“Let’s go stumblin’ / because you know we can’t dance”) or inviting you to go down to Dumas Walker for a down-home throw-down: “We’ll get a slaw burger, fries and a bottle of Ski.” Black Stone wants you to help them gleefully trash the joint, whomping out their hard-core rock philosophy even while co-opting some JB funk: “(I feel good, just like James Brown) / Heart-breaker got me a-ramblin’ / Like I’ve been time travelin’ (A back-beat to the funky sound) … I’m about to say something funky, babe! Hot damn, you move just like magic.”

The band took their name from a cigar box advertising cherry-flavored smokes. “Our band is influenced by soul and blues, so I guess the black part of it would be that, then of course the hard rock for stoned, and the cherry is just a little something on top for the girls,” Robinson told Pure Grain Audio.

That soul/blues combo, backed by a thudding Southern rock backline, is in play throughout their latest, 2018’s “Family Tree.” The band tossed in some muddy funk for “James Brown” without forsaking their Bigfoot stomp, like Black Sabbath doing a tribute to Brown.

Even what this bunch calls blues gets a heavy-duty swamp thang makeover, “You Got the Blues” sounding like Robert Plant drug screaming through the swamp with car battery electrodes clamped to him. But before vocalist Robertson gets Plant-ed, in true family tree tradition, he lets his 5-year-old son introduce the tune with a falsetto shout out.

There’s more family matters discussed in “My Last Breath,” a tune Robertson wrote as a love letter to his wife and son: “I was 15 years old / I found somebody new / And how could I have known / That one day she would give me you … If all I had left / Was my last breath / Here’s what I’d spend it on: I’d tell you: ‘You were my world / And she was my girl.’”

The family theme continues with guest star Warren Haynes. He’s not related by blood, but by spirit, and the band thinks of him as a fifth member of the band. Long-time admirers of Haynes’ work with Gov’t Mule and The Allman Brothers, the band was introduced to Haynes last summer by Blackberry Smoke, with whom BSC had toured and jammed over the years.

Haynes agreed to contribute his trademark guitar sound to “Dancin’ in the Rain,” sounding like a heavier, more metal version of the Mule, Southern rock guitar bolstered by a big-footed bottom line.

Black Stone Cherry has left an indelible mark on the musical red carpet, an easy-to-follow trail of big muddy footprints as they’ve stomped their way to the top of the heap.