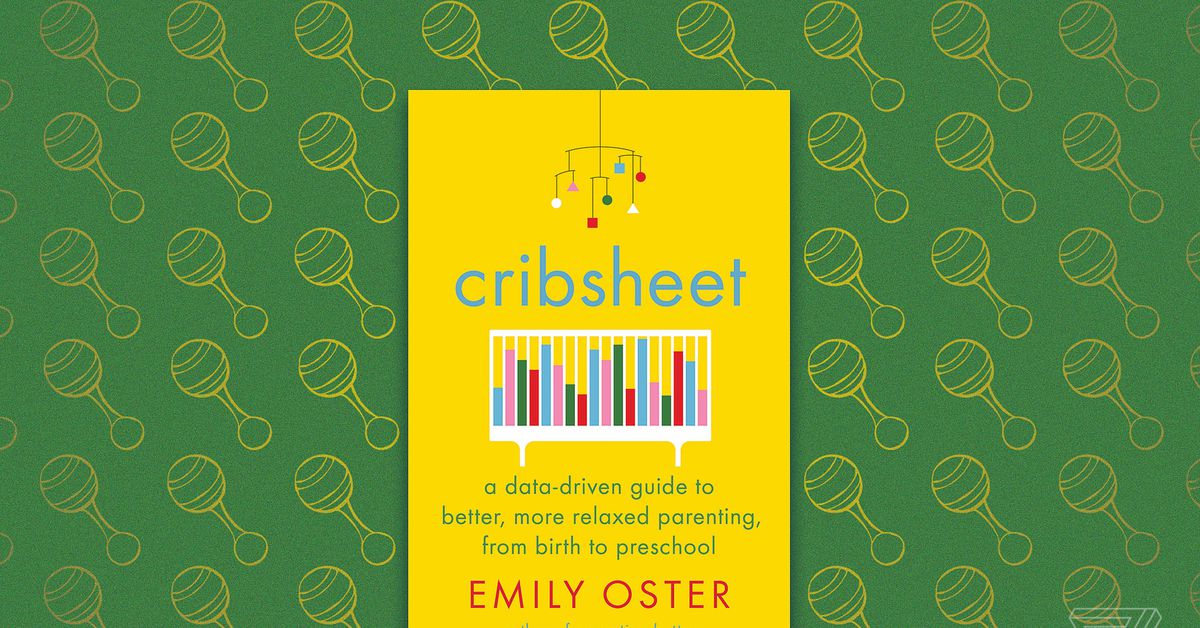 There is no lack of parenting advice available, and the sea of tips from well-meaning relatives and internet strangers alike can leave parents looking to scientific evidence for guidance.

The problem is that not all evidence is equal. There are plenty of studies out there, but a tiny study funded by a formula company, for example, should not be taken as seriously as a large randomized trial conducted by a government agency. “It is not super straightforward to evaluate all of this literature,” says Emily Oster, a health economist at Brown University and the author of Cribsheet: A Data-Driven Guide to Better, More Relaxed Parenting from Birth to Preschool, out now from Penguin Press. (Oster’s previous book, Expecting Better, was a data-driven guide to pregnancy.) To understand what the data really suggests when it comes to sleep training, toddler discipline, or language development, “it goes beyond just reading the papers,” Oster says. It requires evaluating which papers are good, which types of evidence are strong, and drawing conclusions — which are all skills that Oster uses as an academic economist.

The Verge spoke to Oster about the gaps in parenting literature, how to evaluate research, and the best advice she’s ever received.

This interview has been lightly edited for clarity.

How big is the academic literature on birth and child-raising relative to other areas of health? My sense has long been that topics related to women’s health are understudied. Was that the case for literature on parenting?

One place that clearly comes up is screen time. A lot of people would like to understand the impact of screen time on little kids, particularly on the kind of questions that modern parents ask, like “Is it okay for my kid to play iPad games?” That’s something where we simply don’t have the kind of evidence we would need, partly because people differ in their choices about what to let their kids do on screen, but also because the modern version of screens is very different from the version even 15 years ago. So even if you wanted to ask, “What is the impact of this kind of exposure on kids who are graduating from high school now?” we aren’t yet ready to answer those questions. It’s an inevitable limitation, but it’s frustrating for those of us who are trying to make these choices.

On the other hand, what are some areas in which scientific literature has a lot of strong, good evidence? Vaccination seems to be one. What are some others?

Vaccination is one area. Although the literature is very new, the literature on allergies and food is very good. There aren’t a million studies, but the stuff that we have is very compelling and high-quality. A third place I would highlight is the sleep training stuff. Relative to a lot of these other hot-button first-year topics, the evidence there is more susceptible to randomized controlled trials, which are the gold standard of evidence in studies.

Can you tell me more about the types of data that are considered “high-quality” versus the studies that might not be as strong?

The baseline approach that most of the literature takes is to compare outcomes. Let’s take breastfeeding as a good example. You can compare IQ for kids who are breastfed and kids who are not breastfed and try to draw some conclusions. The issue is that, in a lot of settings, the kind of people who are breastfeeding are different from the kind of people who are not, and those differences may well be in part, or entirely, what is responsible for the difference in kids’ outcomes, not the breastfeeding itself. So when we look at these kinds of studies, we want to look for places where we avoid that problem as much as possible.

One way to do that is to try to really carefully control for differences across families. That’s pretty hard to do, though, in some cases, you see siblings who were treated differently, and that tends to be better because they’ll, for example, have the same mom so you’ll at least hold constant the mom. The other thing we can do is randomized trials where instead of just comparing kids who are treated differently based on the choices parents make, you can encourage families to make one choice or another and later compare the kids. Because you’re choosing randomly what you encourage, the differences are more plausibly associated with the treatment and not differences across families.

Since you mentioned breastfeeding, which is a famously hot-button topic, can you tell me a little about what your analysis of the data showed us about its benefits?

There’s a lot of emphasis on all of the many benefits of breastfeeding, and these fall into multiple categories: benefits to the mom, benefits to the baby in the short-term, benefits to the baby in the long-term. A lot of the evidence is biased or problematic because, as we said, the choice to breastfeed is not random. So we have to look at better kinds of evidence. There’s one very large randomized trial and a bunch of studies that compare siblings and do a better job adjusting, and when you look at those pieces of evidence, what comes out is that there are some real benefits for the baby early on — there may be some improvements in digestion, lower allergy risk, a reduction in ear infections — and some long-term benefits to the mom in terms of breast cancer reduction. But some of those claims about later health benefits for kids — like higher IQ, lower obesity, less asthma — don’t seem to be borne out in the best data. So the picture ends up a bit more mixed. It says breastfeeding is great, and we should help people do that if they want to, but we may want to dial back some of the more grandiose claims.

One thing I liked about the book is how you not only go over the data, but you also talk about economic concepts, like how to think marginally in the case of choosing child care and comparing cost. Can you unpack that a bit?

Thinking marginally is a core component of economics. Optimizing — doing the best thing — requires thinking about the opportunity cost and things on the margin. So in this example, when you’re trying to decide what the right thing is to do with child care and evaluating options that cost different amounts, it’s easy to think just about money as money. Just dollars.

I also liked how you added nuance to some stories that we’ve heard, like how marital satisfaction declines after having children. That does seem to be true, but it doesn’t decline identically for all couples, right?

So it’s true that, on average, marital happiness declines after you have kids, but those declines are smaller if the kid is planned and if you’re happier beforehand. It’s not uniform that everybody hates their spouse after they have kids, although I think it is good to recognize that the first year of your kid’s life is likely to be a time when most marriages do feel some stress. That is something you may have to work through, and a lot of people, of course, do come out on the other side.

You write that, as kids get older, it gets more and more difficult to find studies because the data gets way more complicated. How so?

In general, even very good studies are typically only able to figure out an average effect. We’re able to say, on average, did the kid sleep better after we did this kind of sleep training? For little kids, that’s often a well-posed question, but as you get to older kids, there’s so much difference across kids in how they’re going to react to things.

A question a lot of people ask me is something like, is a Montessori school a good idea? On average, we don’t have that much data, and it could easily be the case that a Montessori school is really good for some kids and really not good for other kids. Even a very good study of Montessori could mask some really good effects for some kids and really bad effects for some and our data is even less well-suited to pick up that kind of heterogeneity. That problem only gets worse as kids get older and parents are choosing things that they think will work for their kid. There’s less data, and the reason is partly that it’s so hard to imagine doing these studies well.

The book ends with you talking about the most helpful parenting advice you’ve received. You were taking your daughter to France and were really worried about her getting stung by a bee and being allergic and something bad happening. And your doctor was like, “I’d probably just try not to think about that.” I liked that a lot. Why do you consider that to be the best advice after diving into so much data and papers?

There’s a sense in which, for me, that is very important to hear. I think about that advice all the time because it’s pretty broadly applicable to a lot of things in parenting. We can get caught up in every tiny decision and miss the enjoyment of parenting and the part of this that’s supposed to be fun. It just pushed against some of my worse instincts as a parent to just obsess over everything. Sometimes you just have to accept that you cannot control everything. That’s hard, but it’s part of the fun. Also, the kid was eventually stung by a bee, and it was totally fine.