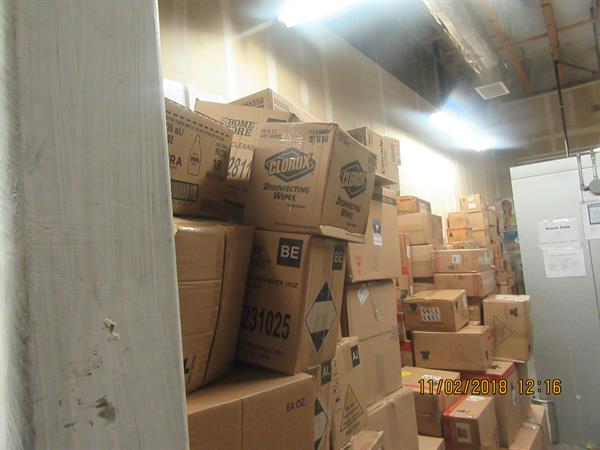 The state Department of Labor & Industries announced Thursday a $503,200 fine against a Dollar Tree store in Vancouver, alleging unsafe conditions. It’s one of the largest fines the agency has ever issued.

The agency accuses the store at 6700 N.E. 162nd Ave. of having blocked emergency exit routes, unsafe ladder use and improper stacking of merchandise among the numerous safety hazards.

A recent inspection resulted in several “repeat willful” and other violations for unsafe merchandise storage and handling, and obstructed exit routes, the agency said in a news release.

A woman who identified herself as the store manager referred questions to a spokesperson with the Chesapeake, Va.-based corporation. Phone calls to two corporate representatives were not returned Thursday. Dollar Tree has appealed the citation, and it could take several months for the appeals process to be completed.

L&I found the same safety hazards at the store during multiple visits, the news release said. The violations continued after the company was informed by an L&I inspector of the safety hazards during earlier visits, and was provided specific instruction on how to improve employee safety at the store and avoid further violations

“Even after multiple large fines, it appears this company has not gotten the message to ensure their safety and health system is working in every Washington store location,” L&I Assistant Director Anne Soiza said in the news release. “This fine is one of the largest we’ve issued, and we will apply pressure to Dollar Tree until its leadership takes sustained, comprehensive steps to prevent serious hazards.”

The state said this is the third substantial L&I citation and fine involving Dollar Tree in about a year. Since the beginning of 2017, L&I has completed 15 inspections at Dollar Tree stores after complaints and referrals about unsafe working conditions.

Dollar Tree has dozens of stores throughout the state, seven of them in Clark County. Also, the corporation opened a $40 million, 665,500-square-foot distribution facility in 2004 in Ridgefield, serving stores in the Northwest.

Prior to this most recent citation, the state had fined Dollar Tree nearly $593,000 since 2013. Last year, a Bonney Lake store was fined $166,000 for three willful violations, and a Kelso Dollar Tree was fined $140,000 for violations similar to the ones found at the Vancouver store in this recent inspection.

“Challenges with too much inventory and not enough storage space lead to high stacks of boxes, often leaning over, which cause blocked and impeded pathways and other hazards,” the agency said.

“Improperly stored merchandise can fall, resulting in serious injuries or death if the boxes strike employees or cause employees to fall, or if exits are blocked during an emergency,” the news release said. “Lifting heavy boxes onto over-the-head stacks is also likely to cause strains and sprains or serious back injuries. In the Vancouver store, workers were also climbing on shelving units, which can result in falls.”

The agency’s inspection of the Vancouver store opened Nov. 2 and closed April 16, L&I spokesman Frank Ameduri said in an email.

The store corrected violations when they were first noted, he said.

However, on a subsequent visit “investigators found many of the same violations that had been identified earlier,” Ameduri said.

“During that (follow-up) visit, the store actually received another shipment. Our investigator told them they couldn’t receive it because there was no place to put the merchandise,” Ameduri said. “Someone from the store was on the phone with their corporate office, and corporate was telling them they had to receive the merchandise.

“The problem has been ongoing, and it’s largely caused because corporate sends merchandise whether or not an individual store needs it, and whether or not there’s any place to put it,” he said.

The company has now been placed in L&I’s Severe Violator Enforcement Program, which means its stores are subject to inspections at any time, among other things.

Penalty money paid as a result of a citation is placed in the workers’ compensation supplemental pension fund, helping injured workers and families of those who have died on the job.

L&I’s news release also noted that Dollar Tree stores around the country have been cited for improper stacking of merchandise boxes, mostly in their storerooms, and for blocking exits or impeding pathways.

In 2015, for example, the U.S. Occupational Safety and Health Administration and Dollar Tree Inc. reached a settlement to resolve outstanding safety and health citations, ordering the company to pay $825,000 in penalties. The settlement required Dollar Tree, which operates more than 14,500 stores across 48 states and five Canadian provinces under the brands of Dollar Tree, Family Dollar and Dollar Tree Canada, to address safety hazards, such as blocked emergency exits, obstructed access to exit routes and electrical equipment, and improper material storage, according to OSHA.