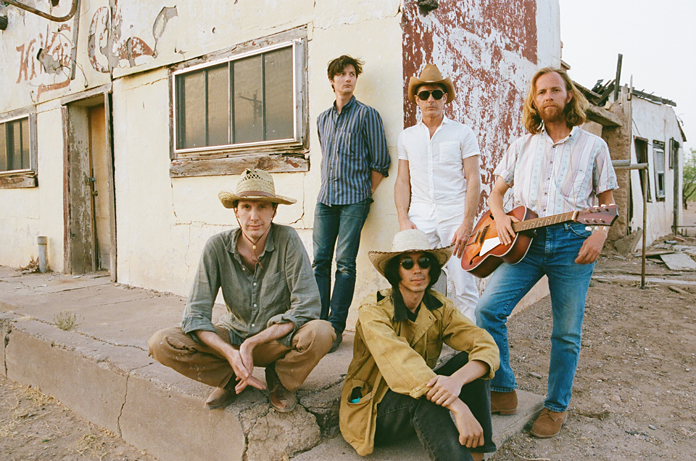 Deerhunter on “Why Hasn’t Everything Already Disappeared?”

Bradford Cox has never been one to sit on his laurels and wait for the next trend to come along. Always several steps ahead of the curve, his music has confounded expectations since the very first Deerhunter release almost a decade-and-a-half ago. Adored by the avant-garde and taken to heart by any number of minimal left field genre categorists you’d care to mention, both he and his band’s music have provided an altruistic anomaly that’s had commentators, critics, and fanatics alike chewing the fat over where they sit in the contemporary family tree.

Which is just how Cox likes it. Out on a limb, doing things his way on terms set by no one other than himself. Never one to be swayed by the bright lights, Cox is happy sharing a modest house with his dog in a quiet suburb of Atlanta, Georgia. (“I want to stay at home with my dog and watch old Humphrey Bogart movies,” he says. “I’m very content.”) Away from the hustle and bustle of inner city life, he is able to retreat and ponder his next musical dalliance.

Which brings us onto the excellent Why Hasn’t Everything Already Disappeared?, Deerhunter’s excellent eighth LP. It’s a spacious affair that deals with the end of the world and toxicity of nostalgia while referencing the brutal murder of UK politician Jo Cox along the way.

“It comes back to this expectation of having to reinvent yourself,” declares the affable Bradford Cox. “So you start asking yourself lots of questions. Then you start to realize you’re making decisions that aren’t based on the songs. Instead, you’re making decisions based on how you think it’s going to be perceived. So you have to take a step back, stop everything and be yourself.”

Recorded in Texas last year, Why Hasn’t Everything Already Disappeared? is a very diverse album musically, from plaintive opener “Death In Midsummer” to the Gary Numan-inspired instrumental “Greenpoint Gothic” and the quizzical “Tarnung” (penned by guitarist Lockett Pundt), through to poignant closer “Nocturne.” Why Hasn’t Everything Already Disappeared? could easily be recognized as Deerhunter’s finest body of work to date in years to come. Something Cox is only too aware of.

“I believe you should only put out an album when you have something crucial to deliver,” he says. “I feel this new album is crucial. It will be a classic. Many of our fans might disagree but then they said the same thing about Fading Frontier. I think that was a crucial album too. People hated Monomania when it came out and they’re slowly coming around to that one now, which was always a little bit strange to me because I told you it was good back then!”

Thematically, Why Hasn’t Everything Already Disappeared? isn’t exactly easy listening. “People keep asking me is there anything positive about this Deerhunter album and I’m always telling them no,” Cox explains. “There is no positive angle to this album. It’s about the apocalypse. Not in a religious sense, but coming from a very bleak and dark place. I don’t see how I’ve written anything on this record that’s a respite from that bleakness. It’s unrelentingly bleak.”

One song on the record (“Futurism”) deals solely with the growing trend for nostalgia, a subject Cox describes as “toxic” when used in the wrong context.

“It wasn’t just specific to music or musical endeavours,” Cox is quick to point out. “People get this idea they’ve lost something so they have to go back. People fail to thrive because they’re convinced an external evolution has left them out. So they’re nostalgic for a time where they felt at home.”

Still, Cox is perfectly at home with just himself and his dog. “I can’t stress how important solitude is,” he admits. “As I get older I require more and more solitude. I just want to be alone. I’m a committed asexual which might be hard for people to understand, but there’s nothing more amazing to me than coming home from a tour and being utterly alone except for the company of my dog. Not talking or having to give, give, give. But then if I got my wish and stayed home all the time I’d start going crazy!”

Cox says that while he makes a living with Deerhunter, “the money is not great.” He keeps the band going because “it’s about making works of art that will outlive the difficult era of music conception we live in now.” Still, he has no interest in levelling up to large arena or stadium shows with impersonal cavernous fluorescent-lit backstage areas.

“People like Whitney Houston and George Michael gave everything to their audiences, and both had tragic endings. They never had a chance,” he says. “I don’t have the capacity to do that. It’s not needed. The audience are happy with what I give and I’m happy with what they give in return. We have a nice arrangement and I’m very satisfied with it. I like my life as it is.”

[Note: This article originally appeared in Issue 65 of Under the Radar’s print magazine, which is out now. This is its debut online.]

Support Under the Radar on Patreon.