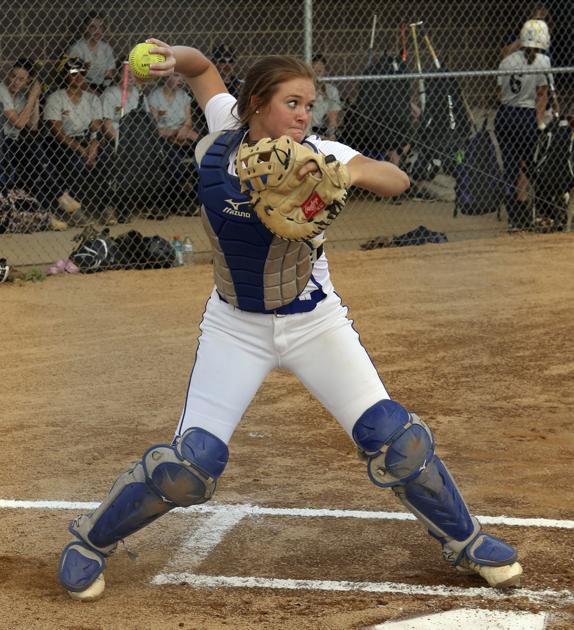 The Wilson family tree has some strong branches on the diamonds of the New River Valley.

Abby Wilson is a senior on the Auburn High School softball team. The Radford University signee was the 2018 Timesland softball player of the year.

Jacoby Wilson is a senior on the Giles High School baseball team. The Bluefield College signee was the 2018 Timesland baseball player of the year.

Both are standout hitters whose work in weight room has paid off at the plate.

“I like the action,” Abby said. “It’s really high intensity. You get to be involved all the time.”

“It’s a lot more fun than playing anywhere else on the field,” Jacoby said.

When Abby’s father, Brian Wilson, was growing up, he lived in Christiansburg with his mother after his parents divorced but also spent time in Pembroke at his dad’s house. That’s where he would hang out with his cousin next door — Jacoby’s father, Steve.

“We would play out in the yard all the time when we were kids,” Brian Wilson said.

Abby and Jacoby are not close, but they would spend some time with each other when they visited their respective grandparents.

Each watched the other play on the diamond last year.

Abby and her twin, Anna, are the fourth-youngest of eight children in their family, including another set of twins. Anna helped the Auburn girls tennis team win a state title last year.

Anna is the reason Abby began playing softball as a kid.

Abby has also played basketball throughout her high school career, but softball is her favorite sport.

She has taken private hitting lessons from Ron Reynolds for seven years.

When she was in middle school, Abby played for a Montgomery County team that twice advanced to the Dixie Softball World Series. Many of those girls are now teammates at Auburn High.

Abby has been Auburn’s starting catcher since she was in the ninth grade, when she hit .443.

The 5-foot-7, 140-pound Wilson took a weightlifting class at Auburn for her first three years of high school.

“She got stronger and got better because of it,” Hurd said.

Abby smacked just two homers as a freshman, but that total doubled to four as a sophomore and doubled again to eight last year.

She made the Class 1 all-state first team last year, when she hit .589 with eight homers, 39 RBIs, 17 stolen bases and 41 runs scored. She was named the district and region player of the year, and helped Auburn win the Region 1C crown.

The Eagles reached the state title game for the first time last year, but they suffered their lone loss of the season in that game.

They hope to win that title this year.

“It’s been a huge goal, especially after going undefeated and then losing that last game,” Abby said. “It’s kind of a sore subject. It just makes us want to work harder.”

Abby is one of six seniors on the team who have committed to play college softball. She verbally committed to Radford in the fall of her junior year and signed with the Highlanders last fall.

“I was looking for something that was really close,” said Abby, who reaped a partial scholarship offer. “I just love this area and being around my family.”

She wants to major in education at Radford.

“I know how to deal with younger kids from being with my younger siblings,” she said. “That’s one of the reasons I want to teach.”

Jacoby started at catcher for Giles as a ninth grader. He moved to shortstop as a sophomore but moved back to catcher last year, when he threw out 14 runners trying to steal.

Jacoby, who is 6-foot-2 and weighs 205 pounds, has also played football and basketball for Giles. He did not have a favorite sport — until last spring.

“I kind of blew up [in baseball] and realized … this is what I’m best at. I just fell in love with baseball,” he said.

Jacoby hit .493 with 20 RBIs, 25 runs scored and a school-record 14 doubles last year, when he was named the Three Rivers District player of the year and earned All-Region 2C first-team honors.

Before last season, Jacoby had never homered for Giles. But he smacked five homers last year.

He credits the work he did in the weight room in the summer of 2017 for his breakthrough 2018 season.

“I lifted hard, and that’s really the reason why I feel like I did a lot better,” he said. “It was honestly just surprising, coming out here and hitting balls that hard.”

“He packed some muscle on,” his father said. “He bought into the weight room.”

Jacoby played American Legion ball last summer for the first time, and his game improved even more. He began attracting the attention of college coaches.

“It was a whole new level. I was seeing 88-90 mph [pitching] every game,” he said. “It was a great experience, being able to face pitchers like that.”

Jacoby returned to the football field last fall. He made the All-Region 2C first team at tight end, and was also used at defensive back, place-kicker and punter.

He kicked a 37-yard field goal with 1:56 left to give Giles a 24-21 victory over Floyd County in September. As a child, Jacoby learned how to kick from former Giles and Virginia Tech place-kicker Cody Journell.

Jacoby said ODAC members Ferrum, Bridgewater and Emory & Henry were interested in him for both football and baseball. But after reaping a partial baseball scholarship offer from NAIA member Bluefield, he signed with the Rams this spring.

“A lot of pitchers aren’t really throwing to me much,” he said. “They’re keeping it outside.”

Pitchers in both baseball and softball have learned that whichever the sport, those Wilson cousins can hit.