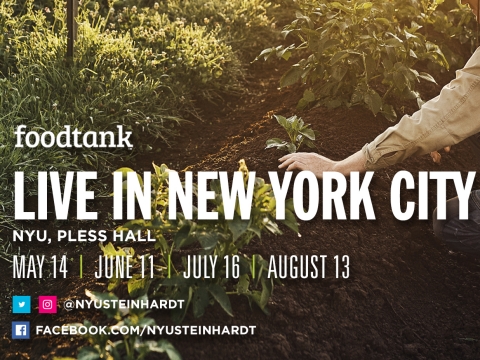 This event and the following three in the series will take place at NYU Steinhardt’s Pless Hall (82 Washington Square E, New York, NY 10003) from 7-8:30 p.m. Following the forum there will be a reception for event’s attendees.

Tickets are free and can be reserved by emailing Vanesa Botero-Lowry at Vanesa@foodtank.com. Drinks and hors d’oeuvres will be provided.

Media interested in attending should RSVP to Jordan Bennett at Jordan.bennett@nyu.edu.

Future Forums
The second forum in the series, scheduled for June 11, will focus on the future of technology in the food system and is titled, Good Tech in Good Food. Special guests and moderators will include: Roee Adler, SVP, Global Head of WeWork Labs, WeWork; Alexander Gillett, CEO, HowGood; Jennifer Goggin, Co-Founder, Startle Innovation; Bertha Jimenez, CEO, RISE Products and more to be announced. Other upcoming topics include Eating for a Healthier and Sustainable Planet on July 16 and Healthy Food at Every Age on August 13.

Each of the events will be aired as part of a Facebook Live series in partnership with Facebook Community Leadership Program (FCLP). The series will also be released on Food Tank’s iTunes podcast.

About Food Tank
Food Tank: A Food Think Tank, is a 501(c)(3) non-profit organization founded in 2013 by Danielle Nierenberg and Bernard Pollack to reform the food system. Its goal is to highlight environmentally, socially, and economically sustainable ways of alleviating hunger, obesity, and poverty.