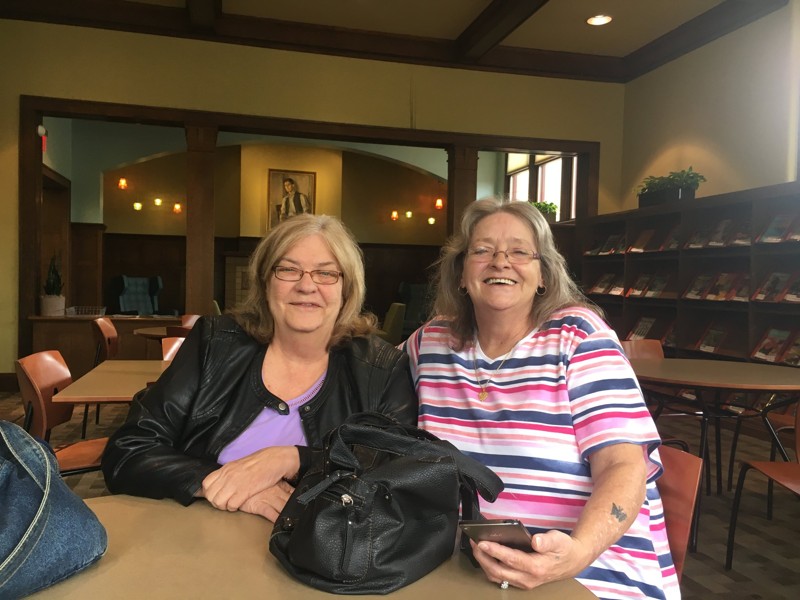 They met while Burkhardt was going through the cafeteria, where Johnson worked, and they liked each other immediately “because we were a lot alike,” Johnson said. “We’ll tell somebody the truth.”

“We’ve got the same humor,” Burkhardt added. “Both of us tell it like it is. We will tell it to your face, whether you like it or not. You could get mad at us, but we don’t fluff anything.”

They learned this year they have quite a lot in common, down to their genetics. By taking DNA tests through Ancestry.com, they learned they are half-first cousins — someone with whom you share just one grandparent.

The two are examples of a growing number of people who are learning more about their genetic backgrounds by using research and DNA tests. Experts believe that as more people use such services, there will be countless surprises and rewriting of family trees, which happened in a very unique way for these two women from Butler County.

With the growing popularity of DNA testing services like AncestryDNA, 23andMe, LivingDNA, and National Geographic Genographic Project, which can cost between $39.99 and $169, people are learning they had relatives they never realized. Some, like Johnson, are learning about marital infidelities of biological parents or grandparents they never knew.

That’s one reason Ancestry.com told the Journal-News it cautions users about the possibility of unwanted surprises that can come from such tests.

“Almost everyone who takes our AncestryDNA test finds something surprising as they embark on a self-discovery journey with us, and for most customers it’s something exciting and enriching,” according to the company statement. “But there are certainly cases where a discovery might be quite unexpected. We take our responsibility towards our customers — and the potential impact of complex discoveries — very seriously..”

Johnson says when she learned in March 2018 that the man who raised her wasn’t her biological father, she was devastated, because, “I was dad’s little girl. We were very close.”

“Debbie can tell you,” she said. “I cried. This is something I would go to sleep crying. I’d wake up crying. Just cry, cry, cry,” she said. “It was just like my dad died, all over again.”

“It was almost — I think — like she felt she lost her whole family,” Burkhardt said.

Ralph Ewen is the man who raised Johnson. He is deceased, so she can’t ask him, but she thinks he must have known she wasn’t his biological daughter.

“It makes me cry,” said the youngest of four siblings. “He’s even a better man than I imagined, because he made sure I never felt any different. He loved me regardless.”

As Burkhardt listened to Johnson’s frustrations this past year, neither realized they were related to each other.

“When I took that test, I matched these three ladies — I had no idea who they were,” Johnson said. They all live in Hamilton.

DNA tests inform you about people who share similar DNA with you, with information about how many genetic qualities you share, indicating they are close relatives.

One of those three women “was raised by a man that she always thought was her father, too,” Johnson said.

“I had all these matches, these names — I had no idea who these people were,” Johnson said. “But I shared a whole lot of DNA with them, so I had to hire me one of these detectives, $75 an hour.”

She paid about $500, which was “well worth it,” to a genetic genealogist, or “DNA detective,” Michelle Trostler of San Diego, who operates the website identifyfamily.com.

Trostler narrowed down possibilities for Johnson, who did a lot of her own research, trying to contact relatives.

She found a man she believed would be her grandfather, “because he was neighbors with them around the time my grandmother would have got pregnant with him (her biological father),” she said.

On March 18, Johnson woke up early, pulled up 1930 Census data and a Hamilton city directory, and learned an ancestor worked at Sunny Breeze Nursing Home, which she knew Burkhardt’s grandmother started and owned.

She phoned Burkhardt and asked a series of family questions.

“I said, ‘Debbie, what was your grandfather’s name?’” Johnson said. “She said, ‘Rollie Burnam.’

“I said, ‘You aren’t going to believe this. That’s the man I think is my grandpa.’ Immediately, she’s on her laptop.”

Burkhardt took a mail-order test by spitting into a tube, and two weeks later, they found their DNA link.

After he and Burkhardt’s grandmother were divorced, Rollie Burnam moved from Ohio in 1934 to Yakima, Washington, where he owned a grocery store and fruit orchard. He lived to be 94.

Tom Neel, library director for the Ohio Genealogical Society, said he has seen speakers ask audiences how many of them have found, or know others who have found, such surprises in their ancestral line due to DNA tests, “and usually, about 20 percent of the people raise their hands.”

Many have discovered some unpleasant family pasts.

As that happens, many more will likely find themselves in the positions of Johnson and Burkhardt, good friends who turn out to be relatives.

“We were just talking about this — we’re so much alike,” Johnson said. “I still find a hard time believing that all this time, we’re connected as close as we’re connected.

“And if I’d had mentioned who I thought was going to be my grandfather from the very beginning, we could have had this solved a long time ago.”

Thank you for reading the Dayton Daily News and for supporting local journalism. Subscribers: log in for access to exclusive deals and newsletters.

Thank you for supporting in-depth local journalism with your subscription to the Dayton Daily News. Get more news when you want it with email newsletters just for subscribers. Sign up here.