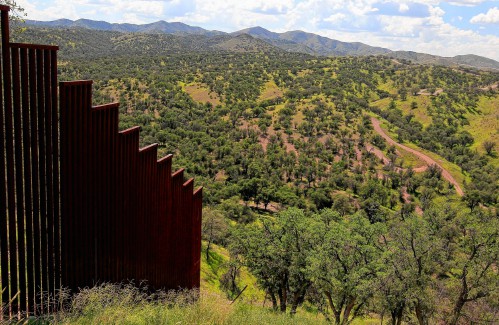 For too long, America has been witness to a human tragedy along its southern border. What has gone largely unnoticed is the accompanying environmental tragedy.

In 2005, amid post-9/11 fear, President George W. Bush signed the Real ID Act, which gave the secretary of homeland security the authority to override scores of environmental laws. It was all done in the alleged interest of keeping us safe.

Many species, including pronghorn antelope, ocelots, jaguars and Mexican bighorn sheep, face death, genetic isolation and potential extinction caused by barriers that don’t keep out humans but do keep out wildlife.

The border wall, in most cases, is folly. It should be removed, not expanded. But if that doesn’t happen, effort must be made to preserve the species, plant and animal, whose existence is endangered by the president’s plan to put another brick in The Wall.

Border patrol agents in trucks and on ATVs carve tracks in land that take centuries to heal. The Wall strands rare turtles and other creatures that drown when they can’t escape flooding. It prevents seed carriers like peccaries, a member of the pig family, from dispersing plants, threatening their survival as the climate changes.

Some birds, like a threatened species of burrowing owl, fly no higher than 13 feet but The Wall often rises 15 feet or more. Toads and other creatures en route to ancient breeding sites throw themselves against The Wall until they die.

Low, X-shaped barriers that prevent vehicles from passing would allow wildlife to pass and could replace The Wall in areas where humans rarely try to gain entry.

Attempts to create openings in The Wall in historic wildlife corridors have apparently been considered but rebuffed by authorities. Such openings, as well as environmentally fragile areas, could be better monitored remotely with sensors, satellites, drones or the equivalent of agents in tree stands or fire towers than with border patrol agents and vehicles.

The human tragedy on the border is real and growing as more desperate families flee north to escape violence, food shortages and government corruption. It’s led to horrors once thought impossible in the United States of America in the 21st century: thousands of children separated from their families and held in jail-like detention camps, fenced-in tents, empty warehouses, a former Walmart store and a massive Florida shelter on an Army base run by a for-profit corporation.

Every year, Border Patrol figures show, about 300 immigrants die after crossing the border. Their deaths and the plight of the illegal immigrants are well-publicized. The silent slaughter of Southwestern wildlife and possible extinction of plants and animals has not been.

The Sierra Club, the Center for Biological Diversity and other environmental groups have documented the impact of The Wall and border patrol actions. For an illustrated tutorial on the environmental tragedy, view “Embattled Borderlands,” a story by journalist Krista Schlyer posted by ESRI, a maker of mapping software. Then ask New Hampshire’s congressional delegation what they’re doing to prevent the extinction of border plants and wildlife.