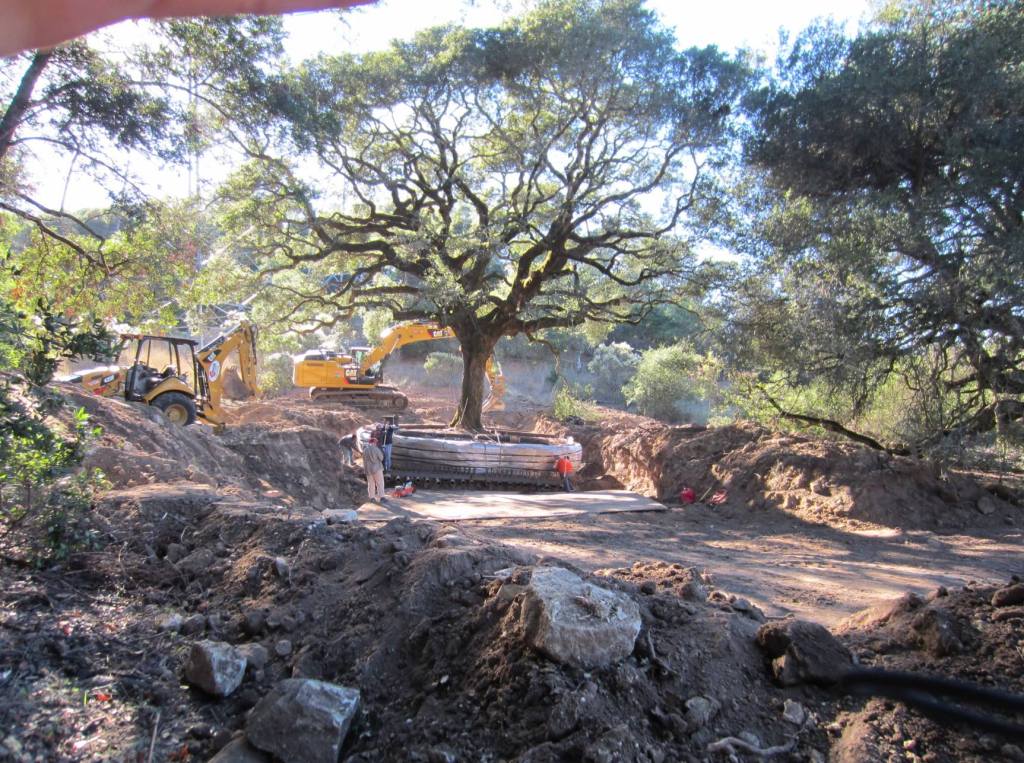 The enormous oak tree towered high above the ground, its gnarled, moss-covered branches fanning out in every direction. For 180 years, the tree flourished undisturbed on a swath of protected land in northern California.

Then, one day, backhoes and bulldozers showed up to the wooded area owned by Toni and Peter Thompson located just north of San Francisco.

The ancient tree was going to serve a new purpose, according to court documents filed last month – decorating a nearby property where the Thompsons were building a new home.

But attempting to relocate the tree and two other heritage oaks several years ago, a process that killed the plants and extensively damaged part of the surrounding environment, would prove to be a costly move for the Thompsons.

In a scathing 56-page decision in April, a Sonoma County judge ordered the couple to pay more than $586,000 in damages to fund restoration efforts because they “knowingly and intentionally” violated a conservation easement, an agreement that the 34-acre property must be left in its natural state.

Judge Patrick Broderick ruled in favor of the Sonoma Land Trust, a nonprofit responsible for enforcing easements, which sued the Thompsons over the tree removal and other environmental damage. Broderick skewered the Thompsons and accused them of repeatedly lying to members of the land trust, writing that the couple “demonstrated an arrogance and complete disregard for the mandatory terms of the Easement.”

“It was a very thoughtful, very thorough opinion that just covered all the ground that we could ask for,” Sarah H. Sigman, an attorney who represents the land trust, told The Washington Post. “This is just an egregious violation from the beginning.”

The Thompsons, however, still insist the damages to the land were not intentional, Richard Freeman, the couple’s new attorney, told The Post.

“They went into this area because they appreciated the pastoral nature of it, the scenic beauty of it,” Freeman said. “They wouldn’t have wanted to do anything that was going to cause harm, damage or scar it.”

The land trust first became aware that something wasn’t quite right on the Thompsons’ property in 2014 after a neighbor reported seeing heavy machinery on the protected land, the Sonoma Press Democrat reported.

When staff from the trust arrived for a site visit, they were stunned by what greeted them.

“I was not prepared,” Bob Neale, the trust’s stewardship director, told the Press Democrat. “It was really the most willful, egregious violation of a conservation easement I’ve ever seen.”

Portions of the area that had once been blanketed by untouched native plants were reduced to mounds of loose dirt, and others were scraped down to bedrock, according to court documents. Some photos showed a massive oak tree in a trench with its roots bound and surrounded by yellow construction equipment. A dirt road stretching for about a third of a mile was also carved through the land, destroying 12 smaller trees and other vegetation in the way, the ruling said.

“The scale of the damage done was really pretty astonishing,” Sigman told The Post. “Those oaks and those plant communities were why this land was protected, because they were special.”

She added, “There are photographs that I’ve described as apocalyptic.”

The first tree the Thompsons uprooted was the 180-year-old oak, which did not survive and was “promptly cut up and hauled away,” the ruling said. Subsequent attempts to relocate two other trees also went poorly. In one case, the oak’s roots were too tangled up in boulders to get it out of the ground and it later died. On the third try, a tree was successfully planted in the middle of the driveway of the Thompsons’ home, but it too later perished, according to the ruling.

Beyond the excavations, the Thompsons also had a contractor dredge a pond near their home and deposit the sediment on the protected land, which “introduced and fostered growth of invasive and noxious weeds,” documents said.

The land trust sent a formal notice to the Thompsons in December 2014 informing them that they had violated the easement and included actions they could take to fix their property, the court said. But while the Thompsons initially said they would work with the trust, they “repeatedly refused to engage in serious or good faith efforts toward that end,” Broderick wrote.

So the trust sued, which led to a 19-day bench trial that came to an end in September 2018.

In conversations with the land trust and throughout last year’s trial, the couple maintained that they had been trying to save the 180-year-old tree from being pruned by the local utility company because it was located near power lines.

“This was a lie,” Broderick wrote in the ruling.

Documents state that the landscaping plans for the Thompsons’ home “called for two large oak trees.”

Over the course of the trial, the Thompsons offered a dozen defenses, none of which the court found had any merit. The pair were “further undermined by their persistent failure to tell the truth,” Broderick wrote.

“They sought on numerous occasions to hide their actions to avoid discovery by Trust and, once Trust learned of the violations, fabricated excuses to obstruct Trust’s investigation and avoid enforcement of the Easement against them,” the ruling said.

Freeman, who only recently started representing the couple, said they plan to push for a new trial on the grounds that the Thompsons’ previous attorney had to deal with unanticipated family emergencies, which hindered his ability to give the case all the time, energy and effort it deserved.

“The Thompsons don’t feel like they really got to fully present their evidence and tell their story,” Freeman said.

He described Broderick’s decision as “very critical” of his clients.

“They are very decent, committed, responsible, law-abiding citizens,” he said. “They just got involved in a situation improving their property that spiraled out of control and had some unfortunate results.”