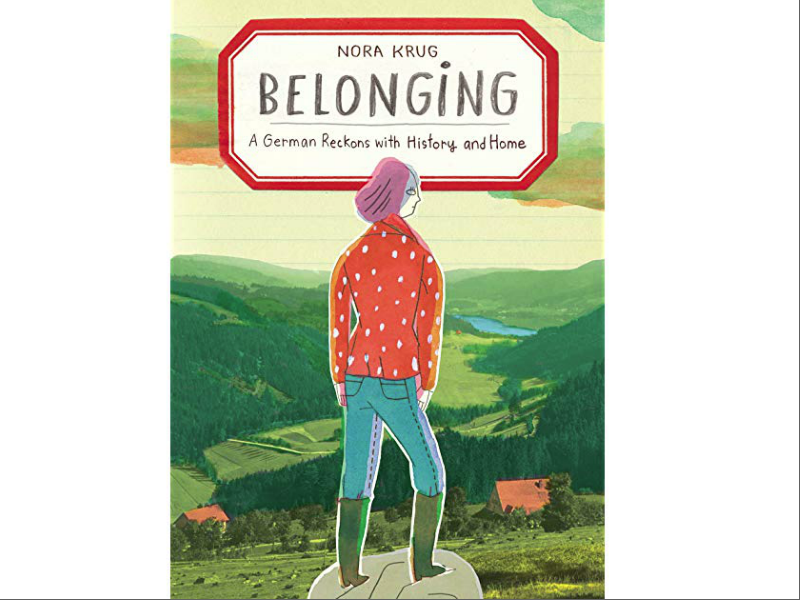 Heimat, a simple yet complicated German word for the place in which a person feels he or she was formed, is at the root of Nora Krug’s graphic novel, Belonging.

A collage of handwriting and illustration, photos and mementoes, Belonging is strewn with discoveries, like her uncle’s Grade 6 essay, “The Jew: A Poisonous Mushroom.”

It was a view that grew until that uncle was shot dead as an 18-year-old SS soldier in Italy.

Meanwhile, her maternal grandfather, Willi – who also ended up in the Nazi party – ran a driving school and worked as a chauffeur for a Jewish linen salesman.

But a chapter from Krug’s own life will be revisited in Toronto, where she can easily retrace a few formative steps of her own.

At age 15, Krug took part in a high school exchange, boarding with a family in Mississauga, Ont., struggling to take walks in a cold suburbia built for cars.

Her host family, which included a German father who moved to Canada in the 1950s and a South Korean mother, exposed Krug to multiculturalism that she saw little of in Karlsruhe, Germany, where she grew up.

Reading her native language far from home in material found around her hosts’ house supplied it with a new, lively context.

“Details like how all German nouns are capitalized hadn’t stood out to me as beautiful before,” she says. “It’s the kind of thing I didn’t appreciate. It was tainted by the Nazis.”

Currently living in New York with a Jewish husband and their daughter, she teaches at the Parsons School of Design.

READ: GRAPHIC ARTIST DIGS UP HER FAMILY’S DARK PAST

Returning to Toronto for the first time in 27 years, her appearances at the Toronto Comic Arts Festival include a talk at the Miles Nadal Jewish Community Centre, steps away from where she attended the University of Toronto.

It’s just one stop along a global path of acclaim, complete with publication in at least a dozen languages.

Belonging was published last year to an exceptional response – few graphic novels have been accompanied by an audio version; their illustrators are rarely in demand for multiple translations, due to all the nuances; and not every author of a book about having Nazis in their family would be pursuing readers who had family members killed by them.

As she writes, her own marriage came with shame – even if her Jewish in-laws never passed judgment on her background, Krug couldn’t stop judging herself, or shake off a sense of inherited guilt.

“Growing up, I’d only experienced Jewish life in the context of the Holocaust,” she says of a distance cast between students and survivors. “We never learned about contemporary Jewish culture.”

The link to any living religion rarely came up amongst Jewish classmates, who largely emigrated from Russia. Maybe it was mentioned by way of the occasional German commentator she saw on TV.

German schools also didn’t encourage students to look into their own family’s history. It took settling in a Caribbean neighbourhood in Brooklyn, N.Y., to spur Krug into navigating that darkness.

Naturally, resurgent nationalism also provides a timely backdrop for discussing the novel – its European editions are entitled Heimat for that very reason, to reclaim the word from Germany’s extreme right-wing.

And in relaying what it’s like to identify with a larger group based on their legacy of values, Krug evokes a different word: Zusammengehörigkeitsgefühl – translated as “communal spirit,” or “feeling of solidarity.”

If the spelling seems complicated, so are the feelings it brings up – imagine what it means when your family tree branched into hate. “We have to continue facing our past,” she says, “and that includes dealing with uncomfortable moments.”

Nora Krug will be in conversation at the Miles Nadal Jewish Community Centre on May 10 at 2 p.m., as part of the Toronto Comic Arts Festival. For details, visit torontocomics.com.