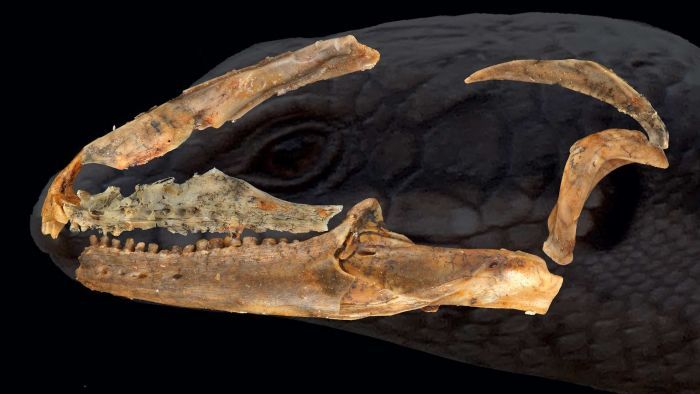 Related Story:
Meet the lizards breaking one of the ‘golden rules’ of evolution
Related Story:
Student on a mission to save Australian sleepy lizards

An ancient lizard fossil believed to be the ancestor of modern skinks is shedding new light on the species.

The 15-million-year-old fossil, found in north-west Queensland and analysed by Flinders University researchers, shows the animal had a crushing jaw, equipped with hard, rounded teeth.

The find is the most complete lizard fossil in Australia and was studied by PhD student Kailah Thorn, with the research published in the Journal of Vertebrate Paleontology.

“I’ve been able to reassemble the skull and look at it and its living relatives and try to figure out where in the family tree this fossil sits,” Ms Thorn said.

She said the fossil was related to a sub-species of skink called social skinks and was largely the same, except that its teeth were “a bit weird”.

“The teeth are very chunky and so is the jaw, it’s quite thick and robust, so it’s eating something different to what the modern relatives are eating.”

Photo:
Archaeologists at Riversleigh in north-west Queensland, where the fossil was discovered. (Supplied: Anna Gillespie)

“When we first saw the fossil, we thought that it might represent something that’s part way between a skink and a blue tongue.

“Actually, it is definitely within the skink group, but it’s showing us what that in-between tooth would have looked like.

“Most of the change would have happened around 15 million years ago,” she said.

“So, that area of the family tree, the rate of change was really fast during that time period and has since pretty much evened out in this group.”

The fossil analysed by Ms Thorn is called Egernia gilespieae, named after Anna Gillespie, who discovered it.

Dr Gillespie, from the University of New South Wales, found the fossil at the Riversleigh World Heritage Site near the Queensland-Northern Territory border, where she has been collecting fossils from sites since the early 1980s for a research project.

“About 15 million years ago, this particular site was a large cave and what’s happened over time is that the roof of this cave has eroded away,” Dr Gillespie said.

“As a result, it formed a pit trap into which fell all these wonderful animals.

Dr Gillespie said the fossil findings could provide an insight into how climate change had impacted on Australia’s flora and fauna.

“For over 30 million years the continent has dried out and as a consequence, our fauna and our flora has changed and the modern animals that we have today are a result of those climatic changes.”